What sort of nightmares do CTOs have?

"HAMR does require the integration of the lasering optics into the recording head and the recording media is a little different material - although the manufacturing tools for those media are the same."

So WD will be relying on its existing Thai operations to underpin the new technologies, though Cain adds that "one of the outcomes of the floods was a little more diversification of the slider operations".

While WD was explicit on the rollout of HAMR and shingling, there was less discussion of where flash fits in. The company has one hybrid drive shipping - the 5mm WD Black - with the flash components sourced through a partnership with Sandisk. While it's in-house at OEMs we’re not currently aware of any shipping product. What happens next is less clear, though it seems Cain sees the challenges in the shape of management software.

"A lot of flash management is in that module. Over time you'll see a higher level of integration and management between the two."

The management issues become more complicated with hybrid shingled drives, Cain explained, where the time penalty associated with rewriting shingled tracks, is offset against the speed the flash cache gives.

“With those decisions about what’s stored where, how we move it around, when the drive’s spun up when it’s not...by integrating that more into the single control point inside the drive we can provide the best overall experience of power and performance."

So if WD sees the hybrid/SSD issue as essentially a management software challenge, this brings up the questions: will Sandisk remain WD's flash partner and how will the dynamics of that “partnership” change over time and will WD second-source or invest in its own flash capability?

On the first, Cain replies, "that’s an evolving strategy and of course [we’re] looking into, as with other components, what the right strategic relationship is." He is similarly opaque on the second point.

So WD is facing the introduction of multiple recording technologies, which will co-exist and overlap, as is targets more segments of the storage market. It also has to continue to work out how its existing magnetic recording business co-exists with solid state storage. And, it hopes, it will at some point really have to get to grips with how it integrates with Hitachi and some of its more esoteric technologies.

All the while it has to worry about traditional hard drive technology maintain its cost performance advantage over other storage technologies. 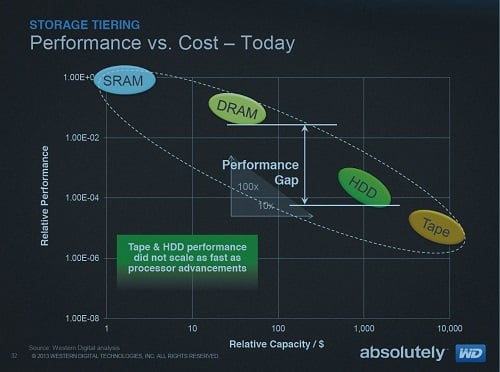 So while extending the life of traditional hard disk and increasing the value it can bring, is it in danger of missing a bolt from the blue - for example in the form of a new entrant to hard disk storage from China say, or, the ultimate nightmare, a completely new storage technology?

On the first, Cain says, "obviously it’s a very capital intensive. It would take lot of IP to be able to manufacture the key technology components.

"We’ve seen more consolidation in the industry over the last five years than diversification. It certainly would be going against the overall trend."

On the second, "Oh sure - nightmare is someone creates something in that upper right hand corner?”

IP could preclude a bolt from the blue to some extent, he says, but "if you talking about something that is completely new and different, and therefore has its own set of IP, without knowing what that is hard to speculate."

So, if this is the stuff of nightmares, does Cain sleep soundly?

One thing that wasn’t on Cain’s roadmap is helium. That’s because helium appears on Hitachi Global Storage Technology’s roadmap, with products slated for this year which will contain the lighter-than-air inert gas, massively reducing resistance within the drive and allowing the squeezing in of more platters.

But although HGST is part of Western Digital - it isn't quite. Chinese competition authorities ordered that following Western Digital’s acquisition of the Hitachi’s disk drive business, the two companies “hold separate” for two years.

However, WD senior veep and GM of its data centre business, Rich Rutledge, was able to talk about the technology... well, up to a point.

“Helium is part of the long-term roadmap for our industry,” he told us. “Helium will ramp as a percentage between now and 2020.”

As for the technology itself, says Rutledge, it’s already extensively used in disk drive manufacture. The challenge is stopping it leaking from sealed finished products.. “It’s a great example where the physics is well known. It’s the actual engineering and doing it cost effectively at high volume.”

One recurring point from Rutledge was a comparison with Intel. The chip giant makes great play of the R&D and manufacturing resources it can bring to bear and the way beyond microscopic geometries at which it works.

“Our stuff works at similar dimensions to Intel’s stuff. Except it moves. There’s a working sub system in there.”

As Rutledge puts it, WD has "long practised a cost leadership strategy” while Hitachi opted for a “differentiation strategy” being "a little more focused on the high value highly differentiated products” and "very close to a handful of large customers".

Welding these two strategies together will present its own problems. However, because of the Beijing-mandated hold, the new parent has not been able to go in and do a traditional slash-and-burn cost-cutting exercise, but has been forced to think much further ahead.

Rutledge said this will likely lead to a more considered integration in the long term: “We may actually thank the ministry.”