Slipping between GNOME and Unity sheets with Olivia

Review Mint is a relative newcomer to the world of popular desktop distros, but it has recently started to take the GNOME and Unity-hating Linux world by storm.

The recent release of version 15, called Olivia, should help it secure a reputation as “the” alternative desktop. If you'd like a modern set of desktop tools without a completely new desktop interface to go with, then Mint 15 has what you're after.

Mint is a very consumer-oriented distro offering respite for the many users unhappy with Ubuntu's Unity desktop on one side and GNOME Shell on the other. Mint still uses Ubuntu as its starting point (Ubuntu 13.04 for Mint 15), but strips out Unity in favour of Mint's own desktops. Also note that, somewhat confusingly, there's also a Debian-based version of Mint, but it uses a "semi-rolling" schedule based on Debian's testing release.

There are two flavours of the Ubuntu-based Mint 15: the older, more stable MATE desktop, which is a fork of good old GNOME 2, and Cinnamon. That started life as a GNOME fork as well, but is now in the process of forging its own path. Both releases have been updated for Mint 15, but it's the Cinnamon release that's the far more noteworthy of the two. 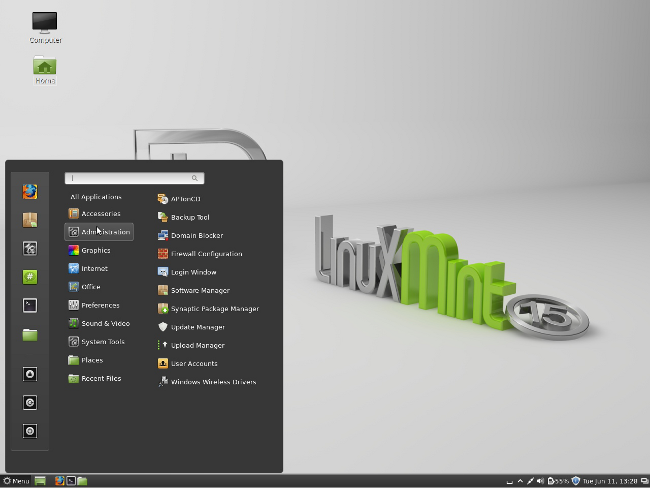 Cinnamon does a nice job of sitting in the middle of what we used to have - the relatively mundane, but stable world of GNOME 2.x - and the new world of seemingly anything-goes desktops. In fact, Linux though it may be, the Cinnamon desktop will likely seem more familiar for Windows 7 users than Windows 8, which also eschews the traditional start-button based desktop.

Mint 15 ships with Cinnamon 1.8, what many would consider the first truly stable release of the nascent Cinnamon desktop. This version boasts some 1,000 changes and bug fixes since the last release and brings several major new features like a unified settings panel, support for widgets ("Desklets" in Cinnamon parlance) and the new MintSources and MintDrivers tools for managing software repositories and drivers respectively.

The MintSources package manager replaces the Ubuntu Software Center and, while it may not look quite as slick, it doesn't hide packages (because they're too "technical" in Ubuntu's view) and it offers a handy speed test to help you find the fastest mirror for downloading. MintSources can also handle PPAs, third-party repositories and authentication keys.

The DriverManager is a standalone app that makes it easy to install 3rd-party hardware drivers like Nvidia binaries or Nouveau drivers as well as wireless and other hardware drivers. It also helpfully lets you know if you're using any proprietary drivers.

This release sees Cinnamon's file manager, Nemo, getting a much-needed make over with some useful new features like the ability to quickly hide the sidebar via a new button on the bottom bar (or F9) and easily switch between the sidebar's places view and the straight folder hierarchy view. There's also a much easier to access file path dialog for keyboard junkies. Nemo also now sports what are known as actions - by placing an action file in /usr/share/nemo/actions you can add items to Nemo’s right-click context menu.

Next page: Mint gets MATE
Page: