If Vladimir Putin is to be believed, the PRISM whistleblower Edward Snowden is considering his options from the transit capsule hotel at Moscow’s Sheremetyevo International Airport. A plane full of journalists, anticipating he would join them, flew from the city for Caracas via Havana yesterday, but Snowden stayed put by the minibar. Why?

A number of questions surround Snowden’s movements. Perhaps the most obvious is why didn’t he get to Ecuador or somewhere else safe before revealing all to Guardian journalists? It could be that someone was already on to him and he felt the company of WikiLeaks lawyers 24/7 was better than keeping calm and carrying on ... perhaps to Quito, which would seem the nicest of the various cities where he could live without too much fear of arrest and handover to the USA. Quito is somewhat off the beaten track, but it can be reached regardless of US interference provided one can first get to Venezuela or Cuba - or, Mr Snowden might choose to remain in either of those places instead.

While he remains in the Sheremetyevo transit area he can be regarded as not officially on Russian soil; so even if the US were to talk ever so nicely to Mr Putin, he can say ever so nicely back that it’s not his problem yet. But Edward Snowden has a problem, and it’s all to do with airspace and routes. The Transportation Security Administration has its Secure Flight program under which it will refuse flights entry to US airspace based on their passenger manifest. Aeroflot's Moscow-Havana flight would normally pass right over Florida, and you can bet that the TSA would either refuse permission to such a flight carrying an Edward Snowden, or warn the Russians that the flight might be forced down.

It would be far from impossible for a jet to reach Havana from Moscow without crossing US airspace, but Aeroflot probably wouldn't change its regular route without special instructions from Mr Putin - and while Vladimir seems disinclined to help the US in this matter, it seems unlikely that he would so publicly assist Snowden either. (The US and anyone else in the area with secondary radar would be able to track the flight's progress easily, as would any journalists on board with nothing more than a normal GPS-equipped smartphone.)

A glance at scheduled flight paths reveals how this closes off Snowden's options. Scheduled routes from Moscow to Caracas all involve a stop-off at a European city along the way, at which point the local authorities would be likely to intervene on behalf of the US.

Even if there were a direct Moscow-Caracas commercial flight - Aeroflot could announce one plausibly enough, perhaps, so potentially ridding Mr Putin of a tiresome long term Assange-style headache - for it to avoid being an obvious slap in the face to the US it would need to follow a credible commercial route. This would take it straight through British airspace, and while the UK has no formal Secure Flight programme like the US it is an even closer friend of Washington than most European countries. The Register has spent some time on the phone to the Foreign and Commonwealth Office today, and unsurprisingly failed to get any sort of commitment from Her Majesty's representatives that a plane thought to be carrying Mr Snowden would be allowed through UK airspace.

Snowden and his entourage have no doubt clocked all this too, which is why he is still in the Sheremetyevo capsule farm.

So how can Snowden fly out of Moscow without ruffling feathers? Fancy a trip to Damascus, Edward? There’s a direct flight there and another one, er, back to Moscow. Scrap that then. Iran has quite a few more outbound destinations, Lebanon too, but there's no obvious way to avoid putting foot to Earth somewhere risky en route to Cuba, Venezuela or Ecuador. 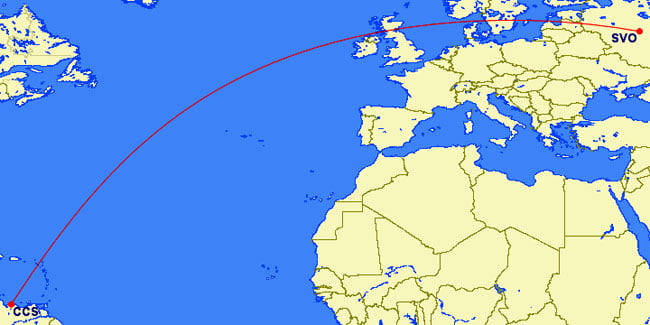 Really it's just the airline schedules that are the problem. If only there were flights running Moscow-Novaya Zemlya-Reykjavik-Caracas, the journey would be in the bag. Planes can do what Snowden needs - there just aren't any planes scheduled to do those things.

But if WikiLeaks wanted to spend some money on jets rather than lawyers ... perhaps it could arrange a chartered flight. Or some kindly biz kingpin might step in - one has already offered a jet to bring him to Iceland.

There are planes available, for instance the top-of-the-range Gulfstream 650, which could fly from Moscow to Caracas via the Barents Sea and the Greenland-Iceland Gap (so avoiding any airspace other than Russian and Venezuelan) non-stop. Gulfstream say that more than 200 customers have ordered 650s - surely a few of them at least would care nothing for the wrath of the NSA?

Very slightly humbler aircraft such as Steve Jobs' or Larry Ellison's personal Gulfstream Vs might not manage quite such an epic in one go, but they could surely manage to get to Caracas unmolested via some suitably non-US-friendly stopovers.

Come on billionaires, show us your balls. Or anyway lend WikiLeaks the money for a charter. We have nothing against the US here at The Reg, but in our judgment an ex-NSA sysadmin at large in Latin America will make for much better news stories than one in the federal pen.

We've also approached a long-range jet pilot we know for comment on this one (for instance confirming that commercial flights do, normally, follow great-circle routes) and he had a couple of useful insights.

"It's not unusual to have pax on board with the name on the passenger list [as supplied to the TSA] totally different from the passport in any case - celebs do it all the time," our flyboy says - though it could be that such noms-de-aviation, presumably intended to fool paparazzi with access to passenger manifests, might need to be arranged in advance with the US authorities.

"I would have thought a slow drift through Africa would suit him," comments our man in the cockpit. "Or why not get on a boat?"

Readers with suggestions on a route Snowden can take to Caracas or some other suitable bolthole, the comments section is all yours. ®