Spending Review As George Osborne hacked away at what he saw as money-wasting thickets in Britain's welfare system during his spending review on Wednesday, the Chancellor of the Exchequer - at the same time - upped the budget for the country's security services.

Osborne will also gift Blighty's spies with "an ongoing efficiencies package to enable the agencies to operate more effectively and to encourage further collaboration" between the domestic, foreign and eavesdropping security centres.

The thin-lipped, posh burger-munching Number 11 occupant told Parliament yesterday that "protecting Britain from the terrorist threat remains a top priority," before adding: "So I can confirm that the police counter terrorism budget will not be cut at all."

Under a so-called Single Intelligence Account settlement, the Treasury has allocated a budget of £1.7bn for the period 2015 to 2016 - which is the first year of the next Parliament. The Treasury said that spooks would benefit from a 3.4 per cent increase in spending as a result of Osborne's plans.

As part of that budget, more taxpayers’ money will be spent on attempting to protect the country from online threats. Whitehall said it would invest a further £210m in the National Cyber Security Programme (NCSP) to help maintain it in cash terms. Here's the breakdown of how that cash will be divvied up:

More details about the extra funding will be announced by the government later this year, the Treasury said. The cash comes on top of the £650m set aside by the Chancellor for the NCSP during the current Parliament. 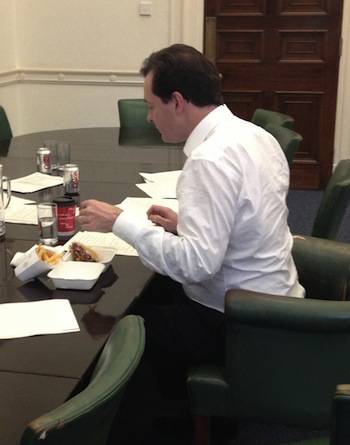 The recent murder of soldier Lee Rigby in Woolwich reignited the debate on the government and police accessing information about our activities online. Labour used the shocking slaying as political currency to demand that the government revisits Home Secretary Theresa May's draft Communications Data Bill, which was torpedoed by LibDem Deputy Prime Minister Nick Clegg earlier this year.

However, in the past few weeks GCHQ has been derided for its alleged spying techniques in the wake of on-the-run ex-CIA techie Ed Snowden's blistering attack on the work of the security services in the US and UK. He revealed details about America's controversial PRISM project, which gathers emails, chat logs and other private information about folks from internet giants.

It was alleged such access allowed GCHQ to circumvent the law, avoid ministerial scrutiny and sidestep the need to obtain a court order when snooping on people. Claims that have been vehemently denied by the UK government, which insisted its security services have always operated "fully within a legal framework".

Meanwhile, Prime Minister David Cameron is pushing ahead with plans to extend spooks and cops' powers to snoop on Brits' internet activities without bothering to pass any new laws. Earlier this month - before the PRISM bomb dropped - the PM said he was considering "non-legislative options" to open access to more communications data online. ®