Clever applications of technology like this, and the surging interested in the new home computers, helped Memotech became a million pound business within a year of its 1981 foundation. By 1984, it had sold more than a quarter of a million MemoPaks and grown its headcount to 110. Boyd had long since left the university life behind to work solely for on his new company as Technical Director.

Boyd and Branton might have contined to focus on peripherals, but the announcement in April 1982 of the 48KB Sinclair Spectrum prompted their backers to wonder whether, with computers coming out with ever more memory on board, there was any long-term future in the memory add-on business. At the first sign of success, Memotech had bought land in Witney, Oxfordshire on which to build a factory to punch out even more of its anodised aluminium-clad memory packs. If the add-on market was about to die, they needed to come up quickly with something else the plant could be used to produce. Boyd and Branton were told toward the end of 1982 that it was time they got into the micro business themselves. 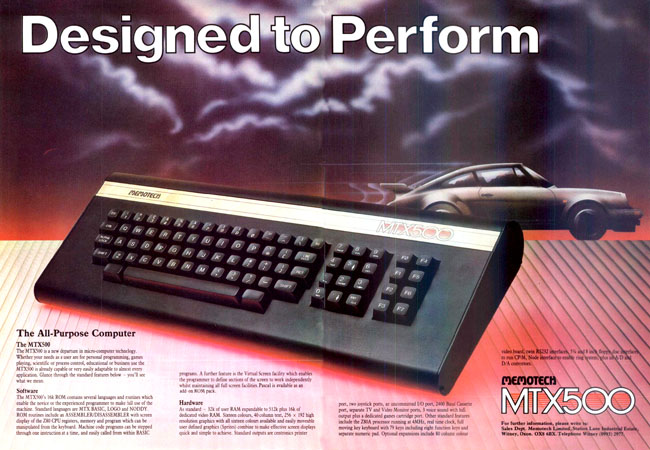 Fortunately, they already had a foot in the door. That year, the Memotech founders decided to fund a project to build a low-cost computer-based hi-res video digitisation system, dubbed HRX. The system was being designed by two post-graduate electronics engineers, Steve Marchant and Chris Marvell. At the heart of the HRX design was a 6MHz Z80B-based computer built by Marchant, which he called, unsurprisingly, the SM1. It had 64KB of Ram, a pair of 8-inch floppy drives, a full 80-column colour graphics card and ran Digital Research’s CP/M operating system.

Memotech never sold the SM1, though a fair few were built to use as development machines within the company and it did, later, offer the HRX. Memotech might have chosen to mass-produce the SM1 - business-centric CP/M machines were much in demand even two years after the 1981 debut of the IBM PC - but because the company had very close partnerships with major retailers and the home computing resale channel, it was decided to develop a system for the home derived from the SM1.

“By that time we had deals with all the top distributors, with WHSmith, Boots and so on, and we figured we just needed to make a great-looking computer and put it on the market and it would sell like hot cakes,” says Boyd now. And, indeed, as work on the new micro progressed through the first half of 1983, it seemed that whatever computer companies could come up with, British buyers would snap straight up.

The result was the MTX. Marchant himself didn’t work on the machine, though Boyd is emphatic about the debt the MTX owes to Marchant as the creator of the SM1. Essentially, Boyd took Marchant’s design and subtracted the more costly and business-centric components to bring it to what Boyd said in an interview with Popular Computing Weekly in June 1983 was “the minimum entry point”. Adds Boyd today: “Most people if they design a computer, design from the bottom up. We designed the MTX from the top down. Our task, in January 1983, was to see how we could take that great design and design it down to an entry-level system.” Marchant’s work on the SM1 allowed Boyd to complete the MTX hardware very quickly.

Not too low-end, mind. The MTX was always designed to compete more with the then recently released BBC Micro than the Sinclair machines, now including the Spectrum, that Memotech had cut its teeth producing peripherals for. “We are aiming at the more serious home user and the business market,” said Memotech sales and marketing chief Tim Spencer in 1984. “The machines are not aimed at the games market, although of course you can play all the usual games on them.”

The MTX wasn’t simply an SM1 without the disks and disk operating system. Any home computer released back then needed a built-in programming language, sound and colour graphics, and the hardware and software to support these needed to added to the pared-back SM1 design. So too was TV output and, in a nod to the Sinclair end of the market, joystick ports. That said, Boyd put in all the hooks he could to ensure the MTX could easily be upgraded back to the level of the SM1, which was also the basis for all the major peripherals Memotech would offer for the MTX.

The MTX500, then, used a 4MHz Z80A backed with just 48KB of Ram. A version with 96KB, the MTX512, arrived early in 1984, but both machines could be expanded internally to 512KB - hence the latter’s name, and alluded to broadly in the name of the first model.

The MTX’s Basic was stored in 24KB of Rom, implemented in three 8KB Rom chips, but more could be added through the expansion edge-connectors placed at either end of the motherboard. Up to 48KB could be added this way, with the contents paged in and out as necessary and in a way transparent to the user. Likewise the all the extra memory beyond 64KB that was all the Z80’s 16-bit addressing could reach at any given time. Boyd had made much of the Z80’s ability to used paged memory in developing his ZX81 expansion packs, which supplied the CPU with their own Ram and Rom selection signals, and used the same trick with the MTX. He tucked the control circuitry in a tiny ULA to keep its secrets safe. 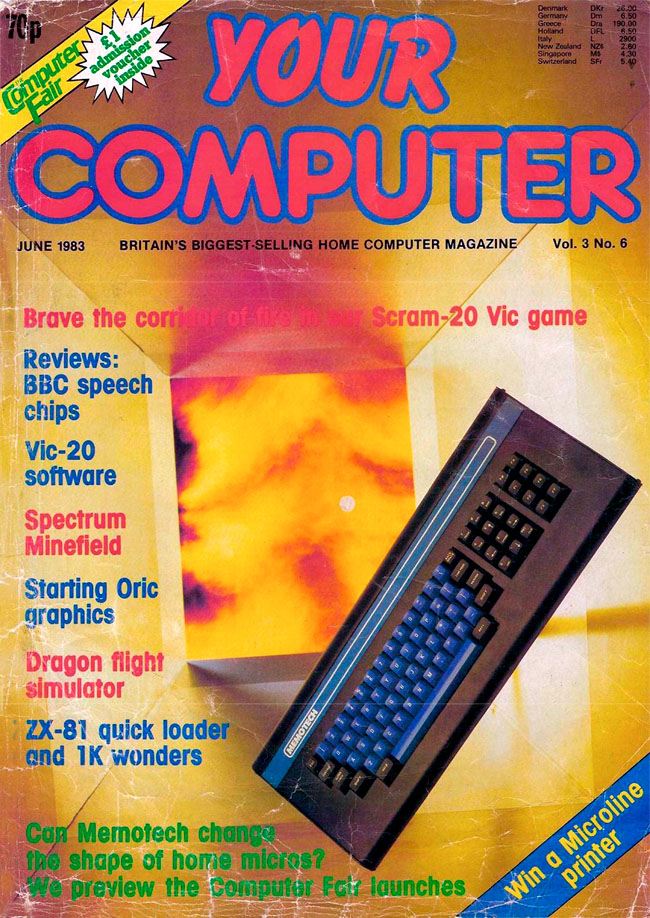 Your Computer puts the prototype MTX 500 on its June cover

The right-side expansion connector was reserved for the MTX Communications Board, which added a couple of of RS-232 ports to be used to hook up the computer’s FDX and HDX storage peripherals, and to connect the MTX to Memotech’s Oxford Ring networking system - a nod to Acorn’s similar network, Cambridge Ring. The left-side connector was presented as a general purpose expansion port, accessed by removing a plastic cover on the side of the MTX’s casing.

The MTX had a 40 x 24 alphanumeric display; Boyd had hoped to squeeze in 80-column graphics, but couldn’t get it to fit in the time allowed to develop the machine. The computer also had a low-res 64 x 48, 16-colour mode that allowed any of the colours to be applied to any of the 4 x 4 pixel blocks; and two 256 x 192 hi-res mode which could also present text on a 32 x 24 grid. In the first of these modes, you could apply two colours to each 8 x 8 array of pixels. The second mode allowed 16 colours to be used. In each machine, 16KB of memory was reserved for the video buffer, and kept entirely separate from the program Ram, allowing users to switch to the higher resolutions without losing space for code.