The picture was managed by the Texas Instruments TMS9929A video chip used in the machine - “the best low-cost graphics chip available”, says Boyd - as was the support for up to 32 user-definable 8 x 8 or 16 x 16 pixel sprites, which, unlike the Commodore 64, could be defined and manipulated with the built-in MTX Basic.

Alas the MTX couldn’t do circles, which appeared as ovals, as they did on the Oric. But it had one clever, unique trick: one of the 16 colours was "transparent" which, coupled with the MTX’s virtual screen system, could allow a background image to be displayed through a "window" in the foreground image. 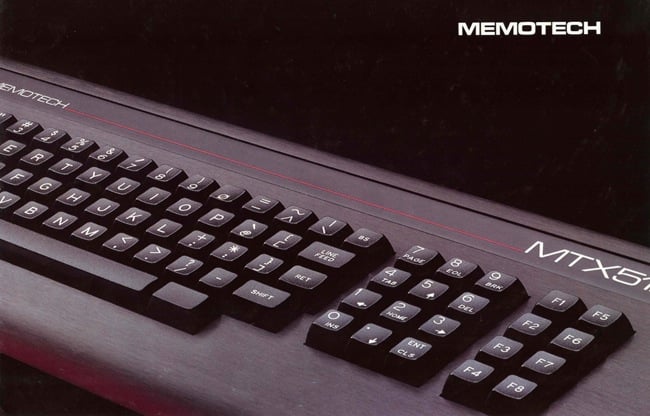 Sound was provided by a second TI chip, the SN76489, this one able to drive three channels of tones and a fourth for noise. It was the chip the BBC Micro used.

The MTX’s anodised black aluminium casing packed in the inevitable TV modulator output plus a co-ax monitor connector; a pair of D-sub, Atari- and Commodore-style joystick ports; 3.5mm mic and ear sockets for the fast, 2400 baud cassette feed; an RCA sound port for hooking the MTX up to a hi-fi; a Centronics parallel printer port; and two gaps for the pair of extended D-sub RS232 ports that were a feature of the Communications Board. The joysticks operated by emulating arrow key presses, so they didn’t need special support in software.

All this in a low-rise shell which, with its integrated 59-key keyboard, and separate numeric and eight-button function key pads - 79 keys in all - could easily be mistaken for a business PC keyboard, especially when hooked up and placed in front of Memotech’s dual-floppy unit, the FDX, or its hard drive enclosure, the HDX.

Coming as the MTX did from the SM1, it was decided very early on that it would measure up to the de facto standard width of a business computer, 475mm, and that it would be clad in Memotech’s trademark black anodised aluminium. The extra numeric keypad and function keys were added because the Qwerty deck alone looked lost among the acres of metal.

The metal casing had other, less aesthetic benefits: it operated as a heat sink - the voltage regulators were bolted to the case metal - and became a Faraday Cage to block stray radio interference from the MTX’s chippery. “Unlike some of its competitors, the MTX512 sailed through the stringent American FCC approval procedures with flying colours - the first time round,” Memotech boasted in its ads.

The MTX case’s physical attributes were established early on, but its colour scheme went through several incarnations before the machine went into full-scale production. Early, pre-release versions sported bright blue Qwerty keycaps and branding - presumably to go with the white on blue text screen the computer presented when powered up and connected to a TV. The adverts which began to appear in the summer of 1983 had red and white branding, with the original Memotech logo. Finally, Memotech settled on the familiar red highlighting, white lettering and all-black keycaps.

Some photos from the period show an MTX with a stronger red colour scheme, not just the branding but also full red keycaps for the keys that weren’t part of the main alphanumerical set. This, in fact, was one of the special versions developed to win a massive order from the Russian government.

The deal with the Soviets was a couple of years further on from the MTX’s first appearance in June 1983. Having commenced development work in January 1983, Boyd recalls, the first working prototype was ready in February - on Valentine’s Day, says Boyd, a target set at a preliminary meeting between him and Branton on Boxing Day 1982. The following months were spent devising how how the MTX’s case would be cut, and in the development of MTX Basic and the machine’s other firmware, including its machine code monitor and Pilot-like computer-assisted instruction language, Noddy - a series of “interactive screen manipulation routines”, as the manual put it.

“Robert took on Richard Hammersley, who was a student at Imperial College, and between him, Robert and another developer, John Luscombe, they were able to do the software, while I tested it,” remembers Boyd. “We had to go from January to launch a product which was ready in six months, and it had to be bug free because it had to go to Rom which had an eight-week lead time so you had to get it right first time. We achieved that, the four of us.”

No shortage of portage
Source: Bilby

Other folk had smaller roles. Oxford mathematician Richard Pinch, who knew Boyd, was asked to provide an algorithm to underpin MTX Basic’s ARCTAN command, though the implementation of his suggestion proved not as accurate as it should have been, which affected some of the MTX’s benchmark scores. These were generally better than all other home micros other than the BBC Model B, which cost £124 more and had less memory, though slightly better connectivity options.

When the MTX debuted, Memotech said the MTX would ship in August, but it would be much later in the year before production began, when “the company’s high-profile advertising campaign has been titillating potential buyers for many months”, as What Micro? put it, and full-scale output wouldn’t begin to take place until early in 1984. During this time, Boyd, Branton and co. had moved on to focus on the development of the FDX and other peripherals, leaving the MTX in the hands of colleagues responsible for manufacturing and sales. They also established Continental Software, run by Ed Hollingshead, to create software for the new machine.