By the end of 1983, review samples had already trickled out, first of the MTX 500 and then, toward the end of 1983, of the MTX 512. Naturally, reviewers focused on the look of the MTX. “The MTX 512 is a real looker,” wrote John J Anderson in US magazine Creative Computing. “It is a computer capable of looking as ‘at home’ in your living room as your stereo does... Feels good too, like slamming the door on an XJ6.”

Your Computer called it “striking”, but Digital and Micro Electronics’ Dick Leslie was more pragmatic: “Assembly is extremely rigid,” he wrote and noted how a small allen key could be used to remove the unit’s end caps, allowing the upper surface to be lifted up to reveal a well-organised motherboard: “All the components are laid out neatly and without any space being wasted... There are no signs of any last-minute alterations on the boards... There isn’t a ULA in sight, which perhaps explains why there have been no serious delays in getting this micro into the market place.”

Leslie even pointed out that a daughtercard was not a patch for motherboard bugs, as was usually the case with early 1980s UK micros, but a swappable unit holding all the country-specific video circuitry.

Inside the MTX 512: note the space for the Communications Board on the right side and the country specific video circuitry daughtercard. The Z80A is down in the left hand corner
Click for a larger image
Source: Dave Stevenson

“The keyboard is superb - goodness knows how much it is costing Memotech to fit it - and it gives the machine a very definite professional style,” Leslie added.

Other reviewers praised the MTX keyboard too - the keys “have a professional and solid feel and a touch typists would feel at home with them”, noted Your Computer’s David Aubrey Jones - though almost every reviewer disapproved of the undersized Return key.

What Micro? was also bothered by the two unmarked keys placed on either side of the spacebar: press both simultaneously and the MTX would perform a reset. The magazine felt this was too easy to do accidentally. “MTX owners would be well advised to consider the old Apple trick of taking the plastic caps off these keys so that they are less prone to accidental use,” it suggested.

But there was plenty of functionality for others to praise, such as the MTX’s virtual screen system. “One can create up to eight of these Virtual Screens with the CRVS command and switch between them with VS,” wrote David Aubrey Jones in Your Computer. “Another command, DST, allows one to roam about freely within screen setting up a page of text using full-screen editing facilities.”

Boyd recalls the virtual screen functionality being added because a visitor to Memotech had happened to mention that Microsoft was working on a windowing system, so one of the software team decided to bring a version of it to the MTX. Similar discussions about the Logo computer language and languages for computer-aided learning had led to the addition of Noddy, a text manipulation language for question-and-answer driven programs, and to Logo drawing commands being built into MTX Basic.

Of Noddy, Your Computer wrote: “There are only eight simple commands that need be mastered [INPUT, DISPLAY, RETURN, EXIT, GOTO, COMPARE, PAUSE and OFF] before some quite complex question and answer type program can be written. It is constructed in pages that incorporate text to be printed to the screen.” Not unlike Apple’s HyperCard, in other words, or even Tim Berners-Lee’s early HTML precursor, Enquire.

Borrowing from the Camputers Lynx, MTX Basic implemented a CODE instruction to hold machine code to ensure programmers could augment their Basic software without needing to POKE decimal values READ from a DATA statement into a pre-determined area of Ram. Unlike the Lynx, the MTX had another instruction, ASS, which was used to enter Z80 assembly language statements directly. 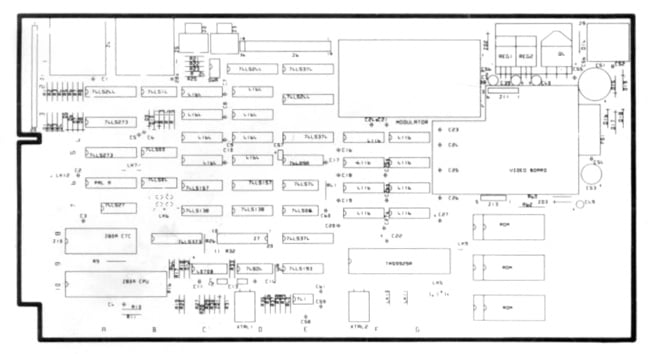 Inside the MTX: the motherboard schematic
Click for larger image

The MTX’s assembler was separate from Basic and could also be accessed through the machine’s Front Panel Display, one of the machine’s virtual screens. This presented a source code listing disassembled from memory, the instruction at the current Program Counter reading, register values and memory in hex or Ascii. Code could be executed instruction by instruction, and breakpoints set to aid debugging, all thanks to hooking the Z80’s Non-Maskable Interrupt (NMI) to the timer chip.

It was, in short, a good old-fashioned monitor program - the sort of thing all home computers came with in the 1970s but which fell out of favour when machines began to ship with Basic built in.

This was a feature other reviewers lauded too, and they were generally very impressed with Memotech’s work. The MTX 500 was, said Your Computer, “a true match for Acorn’s BBC computer... It is well designed and very sturdily constructed. At £275 it is good value when one takes into account what it includes.”