Computing Today’s Owen Bishop saw the MTX’s graphics capabilities, backed as they were by dedicated Ram, plus the machine’s assembly language support and powerful Basic, scope for the creation of “some extensive and elaborate games”.

But it wasn’t to be. Like so many other early 1980s home micros, the MTX, though undeniably competent and well-priced, nonetheless failed to make a dent in sales of the pricier but in-demand BBC Micro, or those of the cheaper, less sophisticated Sinclair computers. Boyd and Branton found that the distributors and retailers who had gobbled up Memotech’s ZX81 add-ons were decidedly less keen on the company’s micro. 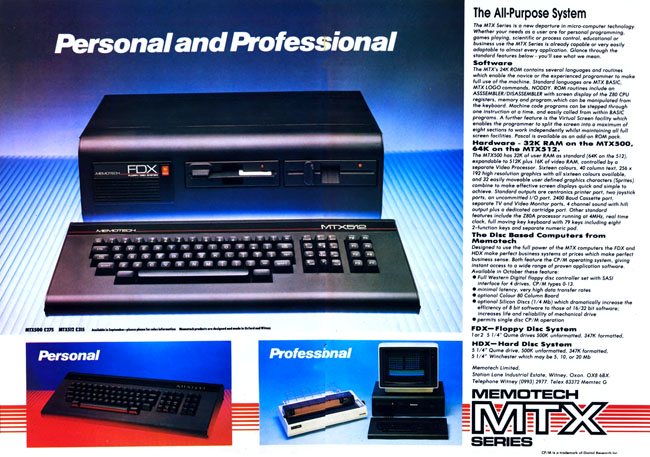 Worse, come early 1984, and suddenly punters seemed a lot less interesting in gobbling up new micros than they had during 1983. Hard enough as it was to compete with the big names, “the bottom fell out of the market,” says Boyd. “No one was buying.”

Having invested so heavily in plant to build ZX81 add-ons and then to convert it into a factory to make computers, Boyd and Branton had to find somewhere else to sell those computers - they weren’t going to sell in the UK. The US was considered, and a US operation established, but such was the colossal cost of marketing there that it could never be a short-term solution. Fortunately, Memotech’s distribution partners in France, Germany and Scandinavia proved more loyal, and as sales trickled out in the UK, demand was strong on the Continent. Indeed, Boyd says this dynamic became apparent very quickly and after a short time the company effectively focused its efforts on supplying its continental partners.

No wonder, then, that in December 1984 when it was summing up the micros available to Brits that - disastrous as it would turn out - Christmas, Personal Computer News said: “If Memotech is guilty of anything, it is hiding its light under a bushel.” Boyd says Memotech continued to advertise in the UK - “it was the centre of the market, you had to maintain a presence” - but its eyes were looking elsewhere.

“The MTX is one of the best-built machines around offering an extremely advanced specification for the price,” continued PCN. “Success in the micro field is an elusive thing but few who have missed deserve it more than Memotech. If they could get more software house to back it the MTX would really take off.”

In a bid to boost sales, Memotech cut its UK prices in August 1984, dropping the MTX 500 by £100 to £175 and the 512 to £199. By this point, Dragon Data and Camputers had already gone bust, Oric was wobbling, and even Sinclair and Acorn were feeling the pinch. Memotech was perhaps one of the few vendors to already have had an eye on professional users, and that year it released the FDX and HDX, add-ons to give the MTX business-friendly technology. And the MTX series was briefly joined in the autimn of 1984 by the RS128, an MTX with 128KB of Ram, though there’s little evidence that Memotech shipped and RS128’s any great volume, certainly not in the UK.

The FDX looked like a 16-bit business micro’s system unit. It gave the MTX a pair of 5.25-inch floppy drives and the 80-column text-centric graphics cards needed to run the copy of Digital Research’s CP/M 2.2 the FDX bundled. Memotech also chucked in SuperCalc 2 and NewWord to handle, respectively, spreadsheet and word processing duties. Hooking up the FDX and starting it all up from a system disk would bypass the MTX’s Basic interpreter and juggle the memory map the way CP/M liked it.

The £870 add-on also contained space within its enclosure for up to four Memotech silicon disks of the kind enigneer Steve Marchant had devised for the SM1 back in 1982. It also had expansion ports for extra drives and such. Indeed, the FDX almost turned the MTX back into the SM1. The HDX was a variant of the FDX, with a 5, 10, 20MB hard disk in place of the second floppy drive.

One problem: business users were now beginning to favour IBM-compatible PCs over CP/M systems. Memotech probably had a window of opportunity to make the most of the last years of CP/M, but it was soon distracted by an opportunity it felt it could not let go by: to sell hundreds of thousands of machine to the Russian government.

The MTX and its FDX (left) add-on were critically acclaimed. Memotech even rebranded a dot-matrix printer to go with them

The company signalled its intentions in April 1985, though the deal-making had been going on for months previously, a result of a 1984 government initiative to bring some help to the UK’s struggling tech companies. PCN reported that the company was anticipating the sale of some 200,000 micros and 20,000 disk drives units to Russia.

The Soviet Union was in the market for computers it could put into its schools. At the time, export controls strictly regulated the shipment of advanced Western computer technology over the Iron Curtain, but COCOM regulations were changed to allow CP/M machines to be sold to the Eastern Bloc. Memotech, with its Z80-based, CP/M capable MTX was an obvious contender, less so Sinclair with its Z80-based Spectrum and Acorn, with the 6502-based BBC’s add-in Z80 option, but they too were introduced to the Russian negotiators.

Meanwhile, Memotech had another trick up its sleeve: Speculator, a gadget allowing MTX owners to play Spectrum games on their computers. Both machines, of course, were based on the same processor, the Z80, so Memotech hired a contract programmer called Tony Brewer to devised a way to load machine code games off tape into the MTX memory - the Speculator shipped with a set of “loader programs” for 20 popular Spectrum games - and run them. Brewer had already written driver code for the FDX’s silicon disks.