At the same time, other Memotech programmers were working on the Russian version of the MTX. The Soviets required some cosmetic changes to be made: red instead of black, mainly, but only a couple of demo machines were actually produced, says Boyd. The bulk of the work, however, involved converting MTX Basic into the Russian language. Memotech had some expertise here: the MTX already contained character sets for a variety of European languages, to facilitate sales in France, Germany, Spain and Sweden.

And then the Russian buyers decided instead to acquire just 10,000 computers based on the MSX platform. 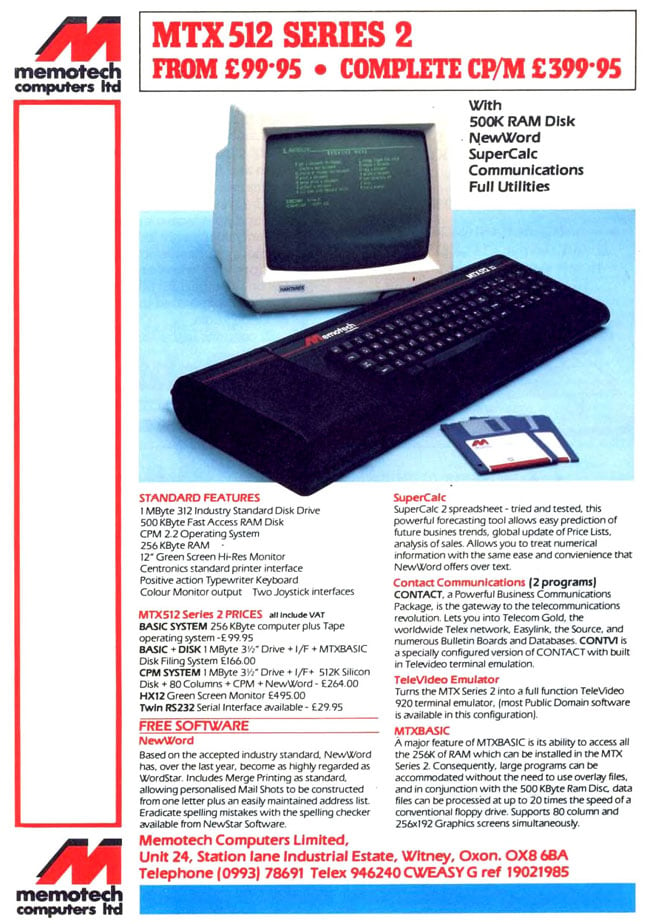 Immediately after the announcement of the MSX deal, Memotech spokesman Jeff Wakeford told Popular Computing Weekly: “[The Russians] have asked us to go back to the Soviet Union with the Memotech micros in August, so at least they’re still interested.”

They weren’t, and as MTX sales continued to fall, Memotech’s options were running out. In September 1985, it slashed the price of the MTX 500 to just £79.95, the 512 to £129.95. It was a desperate move and it failed to pay off. As the money ran dry, Memotech had little option but to declare bankruptcy and call in the receiver.

Naturally, the company blamed the Russians, but today Geoff Boyd admits they were simply a convenient scapegoat. What really killed Memotech was developing and producing a machine during a boom - 1983 - only to launch and begin selling it right before a bust - 1984. Failing to persuade retail and distribution giants to buy the MTX as readily as they had Memotech’s memory add-ons didn’t help. Almost all the components needed to manufacture 1984’s machines had been bought in advance during 1983 at the peak of the market. So not only had Memotech stacks of parts, it had also paid a premium for them. It had had to, says Boyd, to secure supply and buy heavily to beat lengthening lead times as factories became jammed with production orders. Besides, not a soul had anticipated 1984’s decline.

By March 1986, Memotech’s backers had decided to move on. Robert Branton had left the company during the 1985 crisis, so Boyd acquired Memotech’s assets himself and prepared to re-launch the company as Memotech Computers. He had help from Keith Hook, who ran SyntaxSoft, which had sold the Speculator and a similar gadget Tony Brewer had worked up for the Tatung Einstein. Something of an MTX fan, Hook also ran Genpat, an MTX User Group and his byline can be found in old issues of PCN as a reviewer and letters-page correspondent.

He may even be the real writer of a letter from one Philip Arkley of Acrington, Lancashire published in Popular Computing Weekly’s 14 August 1986 issue, which noted the arrival of both Vortex Software’s Highway Encounter game and that “most of Mastertronics’ best software” had all now come to the MTX courtesy of Syntaxsoft’s porting efforts.

The surprisingly well-informed Arkley also claimed that Memotech Computers had now axed the 500 and slashed the price of the 512 to £79. “For the price of three-quarters of a Spectrum you get four times the speed and power,” he insisted before promising a new machine at Christmas - four months away. It’s hard to believe Arkley was just an ordinary MTX user.

Not least because he was correct. September 1986 press reports suggested Memotech 2.0 would be coming out with a sub-£100 games machine, but a rival to Amstrad’s massively popular PCW8256 - one of 1985’s few UK IT success stories - was also mooted and, by October, was back on the cards, possibly to ship with an emulator to allow it to run PCW software. That was a Syntaxsoft specialism, don’t forget.

And then, in December, Memotech began advertising the MTX 512 Series 2: a tape-based 256KB model for £99.95, rising to £166 for a version with a clip-on 1MB 3.5-inch floppy and MTX Basic disk extensions. Or, for £264, you could get the MTX plus drive plus 512KB Ram disk plus CP/M plus 80-column card. It was essentially Geoff Boyd selling off the components and MTX computers he’d acquired in order to take control of Memotech.

In January 1988, Your Computer noted: “Memotech is still around, though in a smaller and different form from the original Memotech... still based in Oxfordshire and catering for a loyal but dwindling band of supporters.”

The MTX, then, went out not with a bang but a whimper.

Not so Geoff Boyd, who used the foundation he had created by establishing Memotech 2.0 to build a successful business providing electronics to run stacks of CRTs in video wall configurations. In the late 1990s, the LCD manufacturers moved into the market, using their ability to integrate the control electronics into the displays to undercut existing offerings. Geoff moved on and, still at heart an enthusiast of audio electronics, went on to join UK flat-panel speaker technology company NXT to drive its licensing business. He was there for ten years. Now he runs Coleridge Design Associates in San Jose developing audio technologies.

Robert Branton went on to found Lazy Summer Books, a kids’ publishing endeavour. He has continued to work on software, developing dictionary management code for many of the big names in dictionary publishing. He’s now director of systems a self-publishing site YouCaxton. Thanks, Paraic

Steve Marchant, creator of the SM1 micro, from which the MTX was derived, continues to work with Chris Marvell as Technical Director at Marvell Consultants. After his involvement with Memotech, he also managed the University of Nottingham’s micro labs, and was later Technical Director at image capture company Picsolve. ®

The author would like to thank the many retro-tech fans for archiving home computing adverts, photos and documentation from the 1980s, without whom this feature would not be possible. Thanks to Dave Stevenson in particular. Very special thanks go to Geoff Boyd.

Arkley actually got in touch on 04/03/19 to say he is a real person who really liked the MTX. "At the time I had a massive interest in the MTX and promoted it in any way I could, with it being such a well built and powerful (real) computer," he said. "I'd no connection with Memotech. I was connected to the home computing trade at the time and much of my intel was from the trade magazines of the time (e.g. the wonderfully and often sarcastic Computer Trade Weekly – CTW).

"It was heartbreaking to see Memotech fail like they did. I still rate their MTX and the few bits of software that made it to the platform. I did have a Spectrum Emulator – which really was a huge admission of defeat. Paying software houses to produce MTX versions of the latest titles would have been money better spent. Then again – that's with the luxury of hindsight.

"With the advent of PCs and games consoles I lost interest in the industry and moved on."