This can't be as easy as it sounds, can it?

There is very little hope for the former option. A stealthy startup that has just uncloaked called ElasticBox is pursuing something that smells more like the latter.

ElasticBox was founded in 2011, and the company's CTO is Alberto Arias Maestro, who was one of the lead developers on Microsoft's .NET Framework and was veep of architecture at DynamicOps, a cloud control freak that was eaten by VMware a year ago to flesh out its vCloud suite.

Other co-founders include CEO Ravi Srivatsav, who worked for Rational Software (now part of IBM) and Microsoft on application development tools, and Kittur Nagesh, vice president of marketing. Nagesh has worked in engineering and marketing roles at Intel, HP, Cisco Systems, and Juniper Networks and also has a dozen patents under his belt.

And that is one of the reasons why ElasticBox was able to bag $3.4m in A-round funding from Sierra Ventures just before it uncloaked this week from stealth mode.

The idea behind ElasticBox is simple enough to understand, even if it has taken two years to code it up in Python to make it happen. Srivatsav says that the design goal of its eponymous tool is to shrink the time to develop an application in half. Not only that, but to do it based solely on a central policy-based engine that masks the differences between virtualized servers, their hypervisors, their virtual machine formats, and their cloud controllers (on both public and private clouds, no less).

This sounds like magic, and of course it isn't. I have a hard time believing this really works, but I thought that about the morphing software in Transmeta chips, too.

The metaphor that ElasticBox has come up with for this higher-level abstraction is a box, which is not a virtual machine, but rather a stack of software culled from a service catalog that has been set up for the many different formats that are possible in the myriad public and private clouds.

It is a description of a complete application as well as the software that comprises it. And if you are using custom software, or third-party apps or systems software, there is a way to package it up in a box for various cloud formats and add it to the catalog. 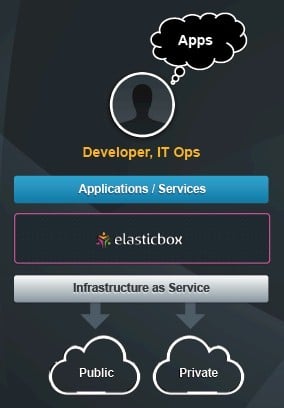 The catalog has a set of database, language runtime, middleware, and web server software at the moment, and will be fleshed out over time, says Srivatsav. The tool has three different levels of access control, with roles set up for software engineers, software architects, and cloud administrators, giving them different levels of control over application development, testing, and deployment.

ElasticBox hooks into the Puppet system management tool from Puppet Labs and its somewhat similar Chef counterpart from Opscode, and also has hooks into various public clouds – including Amazon Web Services, Google Compute Engine, Microsoft Windows Azure, Rackspace Cloud, and HP Cloud. It speaks to VMware's vCenter/vCloud control freak as well as OpenStack and Systems Center, too, for private clouds. And you can plug in your internal access controls, such as LDAP and Active Directory, into it as well.

The other thing that ElasticBox does, and which gives it its name, in fact, is to automate the scaling up and down of capacity (again based on policies) running on public and private clouds.

It would be very interesting indeed if ElasticBox could take a snapshot of real applications and convert them to run on any cloud – public or private – automagically. This is a very difficult thing to do, but is not impossible. In the meantime, sucking apps into a service catalog and then spitting them back out for various clouds is what can be done.

ElasticBox has a few dozen customers in various states of deal-closing at the moment, and it has not set its pricing yet. Srivatsav says that pricing will be done on a per-application basis, and realizes that there is some fuzziness around what is an app and what are two or three apps linked together. The one thing that ElasticBox wants to not do is force customers to count virtual machines and pay for licenses based on that, because the VM count for an application will change as it scales up and down as it runs.

The company has a SaaS version of its software, where it runs the code and which will cost less to license, as well as a private version for running inside the corporate firewall that comes in OVF format and can run on VMware's ESXi or Microsoft's Hyper-V hypervisor.

ElasticBox is thinking about supporting this virtual appliance on top of KVM if there is enough demand for it. The software cannot be used to run bare-metal systems, by the way, only virtualized infrastructure, and for some workloads this will be a drawback.

The other tough sell is to the development and system management teams who do a lot of this application bundling and conversion work as part of their jobs. And ElasticBox knows this. "We are providing unified management across multiple clouds, and the main competition is really internal development and administration teams," concedes Srivatsav.

This could be a tough sell, just like server virtualization and more traditional application lifecycle management tools were in the early days. ®

Not Amazon's fault buckets are exposed, but the loaded shotgun and your foot are all there ready and waiting
Security14 Dec 2022 | 22