NASA's Evolutionary Xenon Thruster (NEXT), an ion-propulsion engine that has been firing continuously for five and one-half years, is due to be shut down at the end of this month. 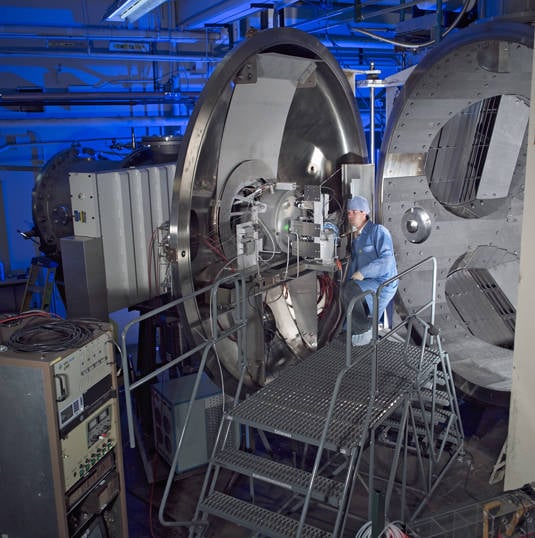 The world's record holder for ion-propulsion longevity: NASA's NEXT (click to enlarge)

"We will voluntarily terminate this test at the end of this month, with the thruster fully operational," said NEXT's principal investigator Michael Patterson in a statement. "Life and performance have exceeded the requirements for any anticipated science mission."

Considering that the NEXT thruster has run steadily for over 48,000 hours, we would say that Patterson and his team have contributed mightily to NASA's reputation of building devices with life spans that exceed expectations. The Martian mini-rover Opportunity, for one excellent example, was originally designed for a 90-day mission, but celebrated its ninth anniversary this January and set a new NASA distance record in May.

For over 2,000 days, the ion propulsion NEXT engine has been humming along in a high vacuum test chamber at NASA's Glenn Research Center in Cleveland, Ohio, bombarding inert, colorless, odorless, tasteless (not in the Kardashian sense) xenon gas with electrons and ionizing it.

That ionized plasma is created in an area of the engine with a highly positive charge, and the ions are thus attracted to the highly negative charge of the engine's "accelerator grid," which spits them out into space – or, in NEXT's case, the test chamber – at speeds of up to 90,000 mph. 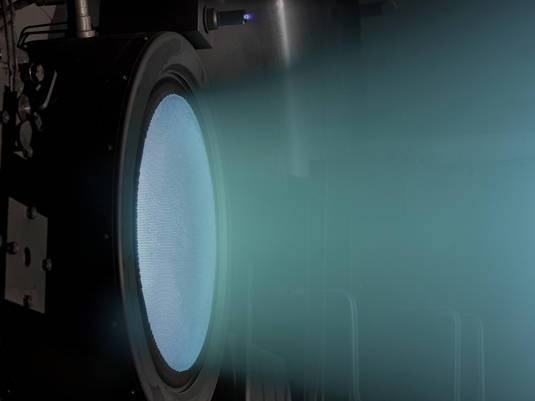 Despite that speedy ejection, the thrust produced by the engine is quite low when compared to the sturm und drang of conventional chemical rocketry – so low, in fact, that it wouldn't be enough to even move the engine itself, let alone any payload, here on Earth. In the vacuum of space, however, the constant acceleration provided by the NEXT engine – or its descendants – could eventually propel a spacecraft at speeds over 200,000 mph, NASA says.

Perhaps more importantly, ion-propulsion engines are both highly efficient, fuel-wise, and can be operated continuously for a long, long time – even longer than the five and a half years of NEXT's operations. During its entire test run, NEXT used a mere 870 kilograms of xenon to produce a total amount of thrust that would require, NASA says, the equivalent of 10,000 kilograms of conventional propellant.

It's not difficult to see the advantages of ion propulsion once a craft has slipped the surly bonds of earth. In fact, "advantages" might be too weak a word. If mankind ever wants to explore deep, deep space, ion propulsion and other solar-electric thrusters might better be described as a necessity – which is why work on ion propulsion has been underway at the Glenn Research Center since the 1950s.

But that work will now go on without NEXT. As principal investigator Patterson said, NEXT will be shut down at the end of this month. So long, indefatigable ion-spitter, and thanks for all the thrust. ®