Despite this, the 803 was nowhere near powerful enough to run business-critical operations like wages, stores, and sales that big companies needed. This was handled by punch-card systems, of which one TNMOC room houses an example. It looks like the skeletal remains of a Terminator machine.

It’s the Elliott 903 where things get noisy. Elliott Automation added the paper tape reader and teletype to the 803. TNMOC has plugged in a monitor to this beast so you can view things electronically. The 903 adds a further 8K of memory while the processor makes a dry squeaky sound – like an old wheel in need of oiling. 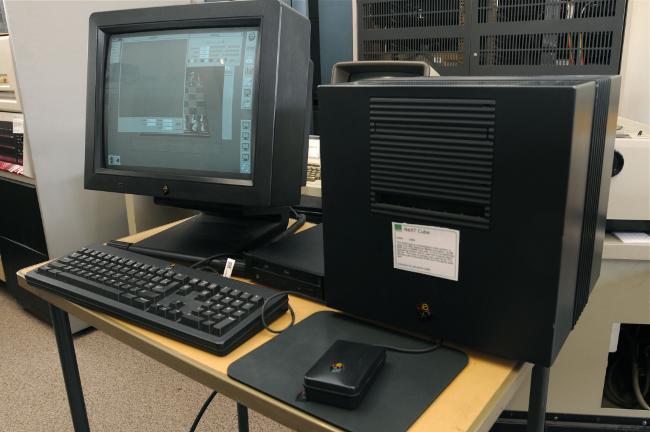 The NeXT Cube: a lost classic from Steve Jobs' "black" phase

In an age when you didn't have monitors to see what was wrong, engineers added such sounds to determine how the machine was working, Spencer says. Engineers would listen for variations; silence, it seemed, was a sign things had gone wrong.

Opposite the Elliotts are 20 washing machine-shaped metal cabinets. This is an ICL 2966, the largest of TNMOC’s machines yet, with a mighty 7GB of disk storage. Machines like the 2966 were used in large public and private operations in the 1970s and 1980s. TNMOC’s beast ran billing, payroll, and general accounting for TARMAC Quarry Products in Wolverhampton between 1985 and 1999.

Storage in this room-sized squatter was tiny but performance was not: storage media consisted of massive ceramic discs covered with a magnetic coating and capable of holding 200MB each. Accessing a specific piece of data meant entering a query into a terminal that told you which disc held the data. The disc was then loaded into a reinforced cabinet, weighing two tons, and spun up to 1,000 RPM.

Both the drums and buildings hosting them had to be specially reinforced because they’d vibrate while running at full power, while the discs had a habit of breaking free. “One guy told me a story of it punching though the wall and into the River Thames outside,” Spencer says.

Arranged around the ICL beast and its 200MB disc is a display of storage media, showing how things have shrunk while capacity has grown. 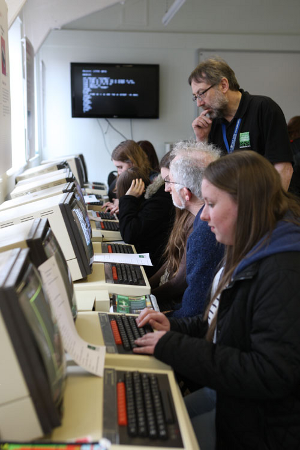 The BBC Micro classroom, where many hack their first code

Now, though, we get personal as we enter a gallery of PCs from the 1980s: among them, Sinclair Spectrums, BBC Micros and Amstrads, and an IBM 5150 of the kind that became Time Magazine’s Person of the Year in 1981.

Here the sounds are more rounded than the metallic punching and dry squeaking of the Elliott, and they are ubiquitous and layered – an aural comment on the explosion in PC ownership during that decade and the sheer number of different types of PCs that were available. TNMOC seems to be piping in some soft '80s synth music, too. It’s here you can get hands-on and either relive old memories of key-tapping or show the kids how a program started by loading your code from a cassette tape.

TNMOC is a work in progress and the PC gallery is the last of its refurbished areas. In the unfinished room next door we find business computers in a holding pattern, waiting to be displayed properly.

If the gallery we left behind was for the consumer, this is all business. Among the machines here is a Xerox Star, whose program takes a full six hours to load. The machine is often left turned off, we’re told, because it's time to go home by the time it's up and running. A NeXT Cube workstation and a NeXT Station mini-computer complete the room’s artefacts. These are machines of legend, thrice blessed by the digital gods.

First, they were created by the hand of Steve Jobs at NeXT Computer, the company he founded after he was booted out of Apple in 1988 following a boardroom insurrection. Second, it was a NeXT that Tim Berners-Lee used at CERN to run the world’s first web browser – the Cube is one of CERN’s machines, but not, alas, the actual example used by Berners-Lee himself.

The NeXTSTEP object-oriented, multitasking operating system these machines run became the basis for Apple’s iOS when Apple bought NeXT – and Jobs – for $429m in 1996.

“People can use these machines,” Spencer tells me. “And people do use this one.”</

Alas, romance is kinder than history. Even in those heady days, people cooed over the NeXTs despite the fact they were ugly by the aesthetic of today’s silver Macs. Jobs, venerated today as an angel of design, was clearly going through his “black casing” phase. Also, few people could actually use a NeXT, as most applications were being written for Windows instead.

After the NeXT gallery you head into a room of twelve BBC Micros. Here, students and school pupils alike learn BASIC on one of the 1.5 million machines shipped shipped during the 1980s. Kids here hack a snake-like game.

“For most school students, it’s their first taste of programming,” Spencer tells us. Up to five groups a day are coming in to pound the Micros' chunky brown keys - and it’s not just kids: senior citizens from the University of the Third Age, ex-London-Underground IT staffers and Danish maths teachers have been filling in, too. 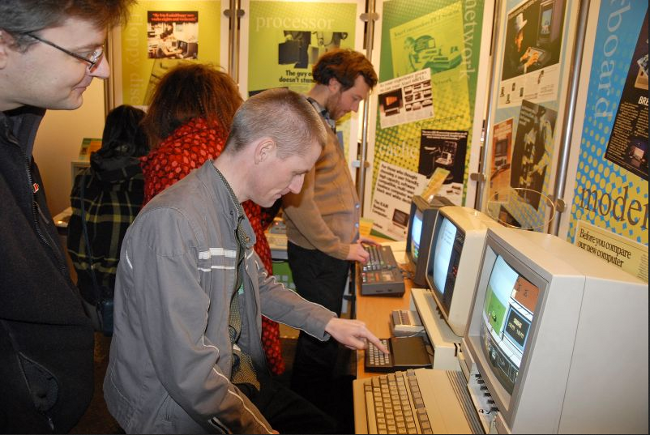 Back to the future inside TNMOC's PC gallery

There’s more at TNMOC, but our time’s up. There’s a room dedicated to ARM, which sprung out of BBC Micro-makers Acorn. Today Acorn dominates smart phones, air-traffic radar control, those Terminator-like hole-punch machines and a new software gallery.

On your way out we stop by the TNMOC shop and café, where you can pick up t-shirts, books, mugs and trinkets - including chunky-brown keys of cannibalized BBC Micro keyboards bearing your favourite letter or command. Cafe refreshments are solid - soft drinks and biscuits, teas and coffees from a machine.

Further afield is Milton Keynes, where you can catch up on shopping and the usual diversity of high-street refreshment. To the east are the spires and fens of Cambridge. If you want to linger overnight and recharge locally, there’s a handful of places to stay, including the Bletchley Park B&B. Again, Milton Keynes has more to choose from with the City Central B&B and Double Tree Milton Keynes. There are more choices in Cambridge

TNMOC is a museum that doesn’t stand still. It’s not just the exhibits that move, but the museum itself is in motion: after two skilled rebuilds (Tunny and Colossus) and one reconstruction (WITCH), a fourth project is now underway on EDSAC, built by Maurice Wilkes. EDSAC became the blueprint for the world’s first business computer, the Lyons Electronic Office (LEO) in 1951.

And while you can’t – and won’t - use these particular systems, TNMOC has an expanding culture of touch: at the time of writing this meant an exhibition on computer music where you can experiment with music software on PCs from the 1980s. TNMOC is running a series of interactive events for July, August and September that'll include a computer music weekend, Raspberry Pi and a games week.

The computers in your life might be getting quieter, but the computers from our past aren't staying quiet, it seems, thanks to TNMOC.

By train: between 30-50 minutes from London Euston to Bletchley. By car: between the A5 and A421, north of London.

Fee is £5 per person, with £2.50 concessions and no charge for children 12 and under. Entering Colossus and Tunny galleries only is £2, or £1 for concessions. TNMOC is free to members. Insight Guided Tours are priced at £5.50, with no concessions, and are only held on Tuesdays - booking is essential. The Colossus and Tunny galleries are open daily; the rest of TNMOC is open every Thursday, Saturday and Sunday afternoon from 1pm.