In 2017, a pack of hybrid mutants stuffed with NAND flash will descend

How many of 'em? We can't say. But HDD vendors have nothing to fear

Gartner has updated its HDD 2012-2017 shipment forecast, and predicts the amount of NAND flash shipped in hybrid drives should increase 163 times in the five years to 2017. But the analyst did not spill the beans on the current level of shipments - nor indeed on how much NAND flash it believes will ultimately be shipped in 2017. What we do have is a clearer picture of what's happening in hard disk drive shipments overall. It seems that traditional HDD vendors will still be making a lot of money and have little to fear from flash.

So much for NAND flash portending general HDD industry doom. But that's not the whole story.

All the growth is in the high-capacity drives. The 10/1k SAS/FC sector will decline, with 33.3 million units shipped in 2012 declining to 27 million by 2017, attributed to the growing popularity of flash storage. Rakers writes: "These estimates reflect the impact of flash/SSDs within the performance tier within the server/storage market."

High-cap drive shipments were 30 million last year and should rise to 116.5 million by 2017, providing a CAGR greater than 30 per cent. 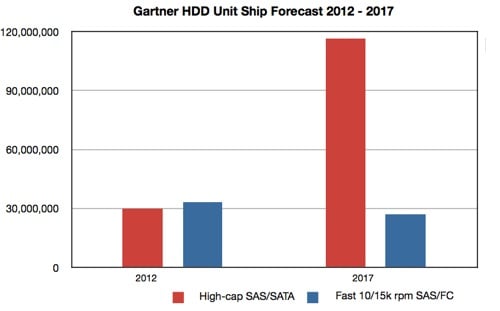 These two drive types made up 11 per cent of total HDD shipments in 2012 and their proportion will rise to 22 per cent by 2017.

Also, half of the world's 5G investment currently is spent by China

Not now, Gartner. We've had enough of the future to last a lifetime: Meet 'Formative AI' and 'Algorithmic Trust'

You can call me Al