A delay for EMC's upcoming Rockies VNX array product, the VNX2, has been noted by a Wall Street analyst with a droop in this quarter's revenues for the storage bods.

The 16-core VNX2 was launched last year and demonstrated in Las Vegas earlier this summer.

RBS Capital analyst Amit Daryanani writes in a note to clients that the VNX2 product's development is delayed. He says:

Both line-ups (we estimate combined ~15 per cent revenue) should get a major software upgrade 24 months after their initial launch, which would provide a robust integration of flash and HDDs within the array, enabling the high-end VNX2 to have 1M IOPS (currently 200K). We expect maximum capacity shipment with VNX2 to be ~16PB (vs. currently 4PB) and total bandwidth of 28 GB/sec (currently 12). Interestingly, the VNX2 should become an attractive option for customers currently deploying low-end VMAX arrays 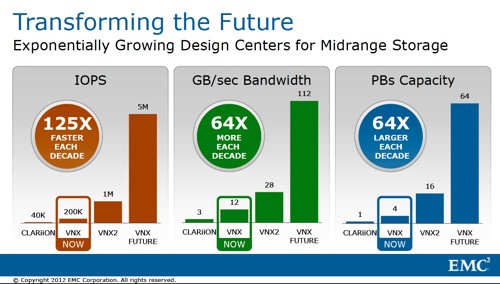 The slide above shows EMC's VNX2 performance and comes from a deck used by EMC Norway's Roger Samdal at an EMC Forum in late 2012.

A source told The Register that EMC is feeling the pressure "from Amazon, currently estimated to have $2bn in storage sales with an expected 65 per cent growth in storage revenue in each of the next 2-3 years which will make them a top 3 player in the storage industry."

With VNX revenues not getting a boost from VNX2 this quarter, Daryanani sees a likely 5 per cent decline in that revenue area for EMC this quarter compared to the year's first quarter. He also thinks Amazon's S3 cloud storage may be taking business away from Data Domain. ®

Insert your Year of Linux joke here, we dare you
Virtualization30 Sep 2022 | 7