Is this the 'droid Tesco is looking for?

Say hello to mObi, a metre-tall retail-friendly robot that, if developer Bossa Nova Robotics has its way, will be hovering up and down supermarket aisles the world over, checking stock, guiding disoriented punters to the baked beans, and reducing even further the number of employment opportunities open to surly Gen Y-ers.

Bossa Nova boss Martin Hitch, a Brit now based in San Francisco - Bossa Nova is an offshoot of Carnegie Mellon University’s Robotics Institute - was demo’ing mObi’s prototype form this week at the WPP Future of Retail forum, an event co-sponsored by Intel.

Chipzilla supplied not only the Haswell processor technology used in mObi - the robot has two on-board computer systems: one for motion control, the other for the scanning system - but has also used its bigger feet to get the small Bossa Nova into the doors of some major US and UK retailers.

The notion behind mObi is simple, says Hitch. Retail sales amounting to four per cent of total sales revenues are lost each year because shops' shelves are not kept as fully stocked as they could be. That amounts to millions of dollars in lost revenue. mObi’s job is to move around a store and spot gaps so that shop staff can fill them more quickly. 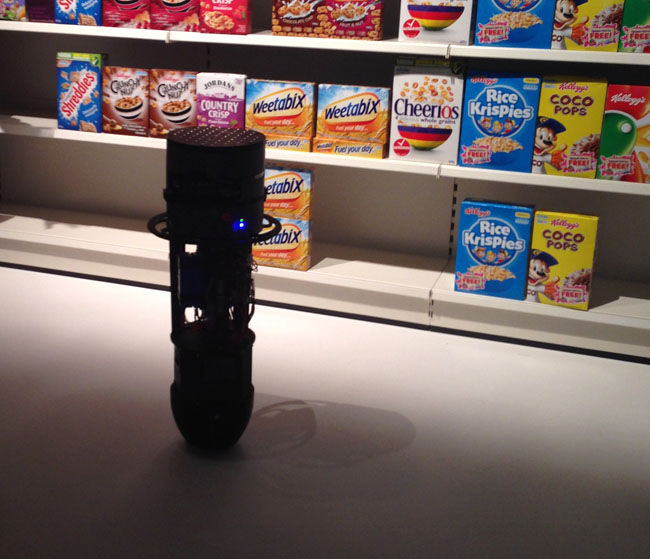 mObi proceeds through the shop - we’re talking large-size venues like big out-of-town supermarkets and DIY stores - taking pictures as it goes. The robot runs on a single, six-inch ball; a larger version of the rubber-covered spheres computer mice used to slide around on. Electric motors not only allow the ball to move the robot in any direction, but also drive the gyros that keep it upright. And constantly moving, which makes it tricky to photograph. 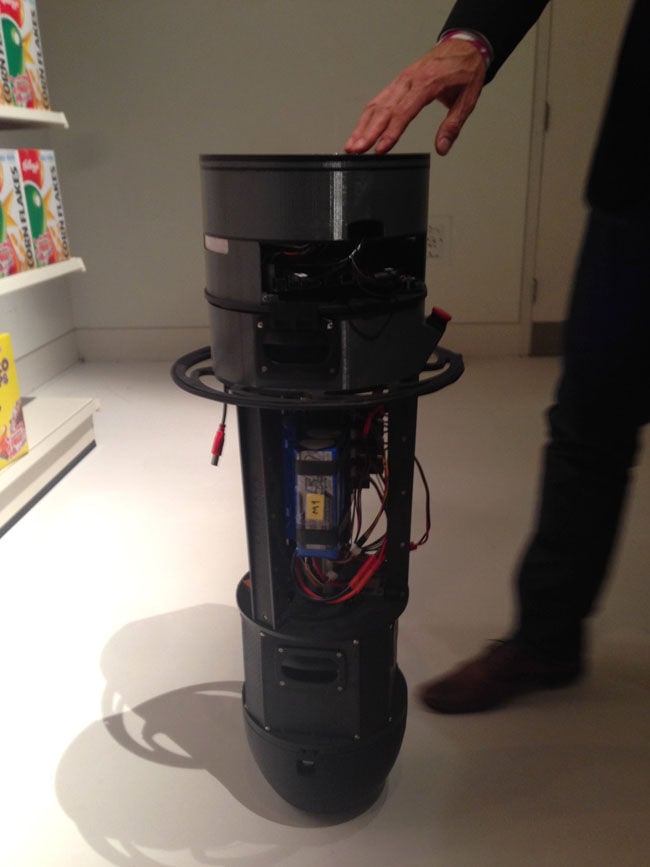 Your plastic pal who’s fun to be with?

It’s not a quiet machine, but it is nonetheless amazing to see it glide around on its narrow tip, always perfectly upright. The ball on which it rolls is largely covered, so there’s no sense of its motion - mObi really does seem to hover. It could almost be floating like some anti-grav assisted sci-fi creation.

mObi runs off a couple of large batteries, and makes its way at the end of each night’s work to a recharging station. Should the power cut out before then, four otherwise actively restrained stabiliser legs immediately spring out to stop the “BallBot” - as Bossa Nova calls its type of robot - toppling over.

Under power, the motion and control system keeps mObi not only upright and mobile but clear of obstacles too, though it’s also able to back away from objects blocking its path and from humans who, as I tried, deliberately get in the way. Of course, in an out-of-hours shop there shouldn’t be any folk around, allowing the robot to stay an even metre away from the shelves it’s scanning. 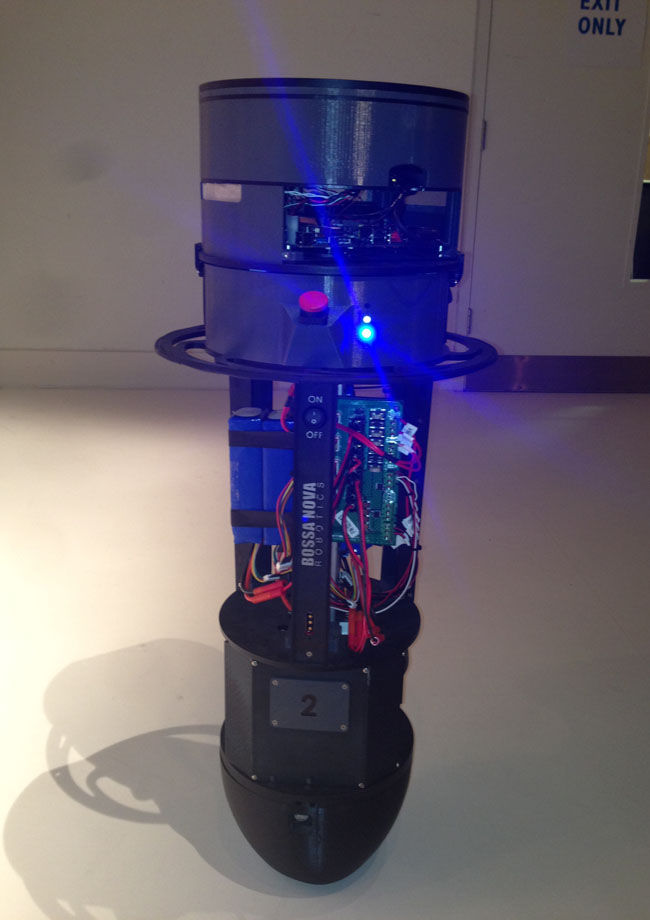 The machines rise up. And stay up.

The scanning process involves shooting high-res pictures of the shelves, illuminated if necessary by a bank of LED flash units mounted in what might be called mObi’s head. Inside the turret-top, you’ll find an Xbox Kinect bar, which provides the robot with its HD camera and its 3D spatial sensing capability. Kinect is connected to the second of Mobi’s two Haswell processors, which ensures sufficient photos are taken to provide a seamless view of all a shop’s shelving.

This collection of snapped together snaps - a terabyte’s worth, says Hitch - is stored on an SSD and, for the moment, passed on completion to a human operator who derives a list of locations requiring refreshed stock. Soon though, Hitch says, that photographic data will bypass the person and instead by processed by computers in the cloud or, later, aboard mObi itself, to generate the list automatically and in a form that can be tied into existing inventory management systems. 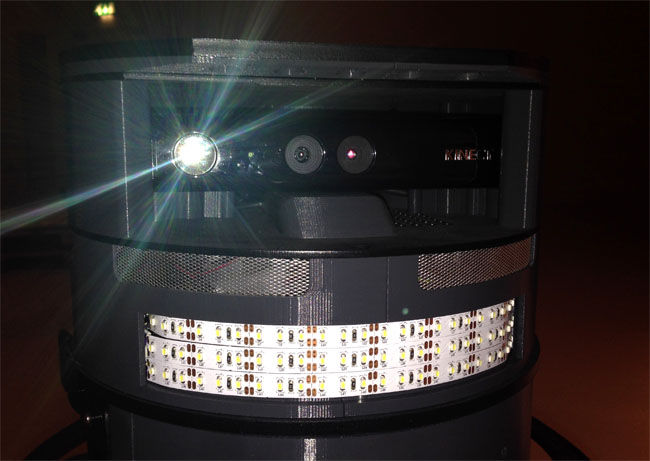 Shades of Bender? mObi carries an Xbox Kinect sensor for scanning shelves, illuminated with a bank of LEDs

Another of Intel’s interests in the project, that: you can almost hear the company’s executives rubbing their hands at the prospect of selling even more Xeon servers to crunch all that extra data in the cloud...

Right now, most of mObi’s smarts are dedicated to keeping it upright and collating its pictures. Software can recognise gaps between packets, but goods have to be face on and positioned at the front of the shelf. Packets set back, placed at an angle or, in the case of tins and tubes, rotated away from the front are harder to deal with. But as algorithms improve and with greater processing power - locally provided or sourced from the cloud - retailers will be able to see not merely that a shelf no longer has any packets of Weetabix on it, but that a shopper left a box among the jars of coffee. 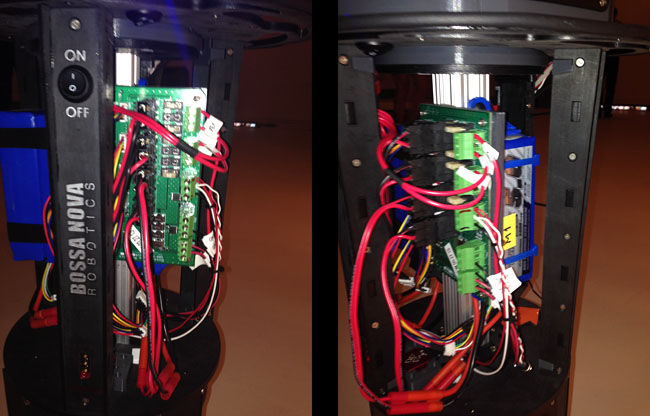 All of which is being worked out in the lab as we speak. So far, mObi has been trundling around test sites accompanied by a human overseer, but Hitch is eagerly anticipating the start of three or more pilot programmes with major US retailers - he won’t say who - early next year, with full deployment currently scheduled to take place toward the end of 2014.

By then mObi will have been upgraded to the more powerful sensors integrated into the Xbox One console, Hitch says, a move that will pave the way for the robot to be used not merely when a shop is shut for the day, but while the punters are present too. For that, a tough outer casing will be required, and the ability to tap into Kinect’s gesture recognition system - which can already track finger and limb movements - to allow shoppers to interact with the robot. 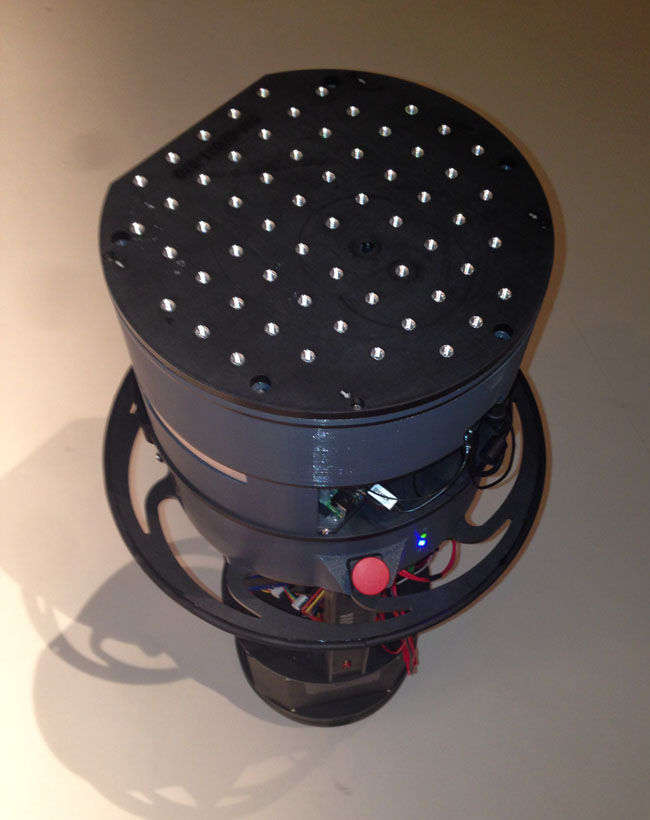 Right now, mObi can take perhaps 10kg of weight on its flat upper surface, but a more rugged chassis could support more - a shopping basket that follows you around, anyone?

More likely, reckons Hitch, robots like mObi will be used to guide shoppers around the store, responding to certain gestures with an offer to show a product’s location on a tablet mounted on the robot’s upper surface. Cloud-connected or even on-board speech recognition and synthesis surely can’t be far behind. ®