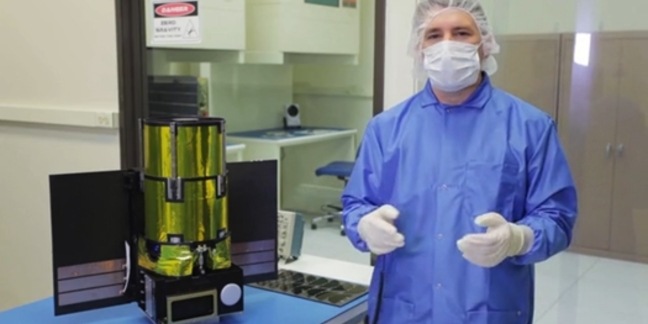 The world could soon have its first crowd-funded space telescope, with Planetary Resources announcing the success of its Kickstarter campaign to raise $US1.5 million for its Arkyd 100 satellite.

It didn't hurt the effort that backers included Sir Richard Branson – in for $US100,000 – and Google's Larry Page.

The main aim of the small satellite will be to help identify the best candidates for the company's planned asteroid mining efforts. However, 2,000 schools will have access to the telescope, courtesy of backers that donated their camera time, and 150 backers will have full access to the instrument, including controlling it to take their own photos.

By reaching the $US1.5 stretch target, Planetary Resources says, all of the Arkyd project aims can be implemented, including a boosted downlink through a second ground station; selfies for backers; and the Asteroid Zoo facility, being developed in conjunction with Zooniverse to allow home users to seek asteroids.

The 42.5 cm-long Arkyd 100 will weigh in at just 15 Kg, with a 60 cm wingspan. Its 200 mm aperture, f/4 primary telescope and 5 megapixel image sensor is specified to have a sensitivity to visual magnitude 19 and one arcsecond resolution.

If you missed out on the Kickstarter project, don't fret. When Arkyd 100 is aloft, the company will be offering commercial access – with fractional use packages a snip at just $US30,000. ®