This is about more than ARM, it is about making hardware malleable

ARM server chip upstart Applied Micro Circuits is bringing its eight-core X-Gene processor to market, and has launched a server aimed at developers with Taiwanese electronics and IT gear maker Mitac International for a microserver based on the impending X-Gene chip.

Whenever you launch a new processor, particularly one with a new architecture like the 64-bit ARMv8, you need to get development boxes out there in the field so operating system and other systems software suppliers can build and test code to run on the chip.

As last year was coming to a close, Applied Micro was showing off potential X-Gene server prototypes using various kinds of system boards based on the X-Gene chip, and also showed off the X-Compute development board. These were conceptual prototypes, not actual ones, which were aimed at lightweight and memory-intensive server jobs as well as storage workloads.

Now Applied Micro has tapped Mitac to punch out some 1U rack servers based on a variant of the X-Compute board so companies can tool around with them:

The feeds and speeds of this X-C1 server that is being distributed by Applied Micro were not divulged, and for all we know it doesn't have all eight cores fired up on the X-Gene chip. It is early in the fabrication process and the yields may not be great, so this would not be surprising.

The first generation X-Gene chips have four dual-core modules for a total of eight ARM cores running at a peak of 2.5GHz, with a maximum of 256GB of memory across those cores. These chips are implemented in a 40 nanometer processes and are etched by Taiwan Semiconductor Manufacturing Corp.

A second generation X-Gene with sixteen cores on the die, etched in 28 nanometer processes and sporting faster 3GHz cores and with a network fabric that will extend off the chip to link up to 1,024 cores into a single mesh across 64 sockets. We don't know if there is cache coherency across those sockets yet, and therefore don't know if it can support one image of the operating system. Our guess is not, but that would be cool.

In the meantime, Applied Micro needs some design wins on the first generation of X-Gene chips, and it has one with – you guessed it – Mitac, which has created a microserver chassis that sports up to eighteen server nodes in a blade server chassis that conforms to the Server Systems Infrastructure (SSI) blade server standard promoted by Intel, ironically enough. 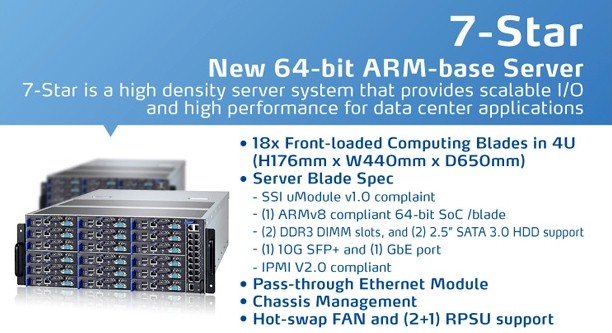 The 7-Star system has one X-Gene processor on each blade module, with two DDR3 memory slots and two 2.5-inch SATA 3.0 disk drives. Each node has two Ethernet ports, one running at 1Gb/sec and another running at 10Gb/sec. The system has two power supplies plus a hot spare as well as a pass-through Ethernet module to link the nodes out to a top of rack switch if you want to do that.

No word on when this 7-Star X-Gene microserver will ship, but it is probably safe to assume that Mitac is at the front of the line.

It looks like Hewlett-Packard might be, too. Paramesh Gopi, president and CEO at Applied Micro, was at the GigaOm Structure conference a few weeks ago, and he was waving around an X-Gene-based server node for HP's Moonshot 1500 microserver chassis. That box can hold up to 45 server nodes in a 4.3U chassis, which is a lot denser than the Mitac 7-Star. 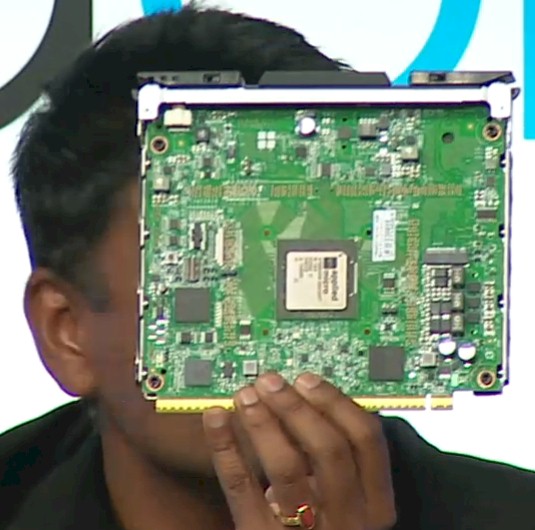 Gopi said in his conversation with GigaOm that the shift to ARM servers was more than changing chip architectures, but was about making IT infrastructure more malleable.

"Over the last seven years, we have ushered in the era of hyperscale, open source computing and what I will call really rapid, commercially viable, large scale cloud application deployment," said Gopi, and he didn't inhale once during that sentence. "I think the hardware for that is largely 30 years old."

Many people tend to agree, and think that, over the long haul, generic, network-enabled system-on-chip designs will be created to serve more than just traditional server workloads.

Of course, everything that Gopi is envisioning for his own X-Gene servers can be – and possibly will be – done for x86 and other architectures. ®