Nobody knows how the “ball of the century” crept around Mike Gatting's bat and leg in 1993 except the king-of-spin Shane Warne – until now.

Ahead of today's opening of the England versus Australia Ashes Test, a brace of Oz physicists have crunched the numbers for a spinning ball, stuck them into elite maths package Matlab - and had their work published by science journal Physica Scripta.

Knowing a hit-magnet when it sees it, the IOPScience publication is letting mere mortals like myself read the entire paper without charge. [And with England 98 for 3 after the break for lunch, perhaps the Australians have had a look too - sub-ed]

Brothers doctors Ian and Garry Robinson (Ian is at the University of Melbourne and is researching education systems, which is relevant to this research; Garry is a physicist at UNSW's Australian Defence Force Academy and usually concentrates on astronomical research) have turned their minds to developing the differential equations governing a spinning ball, or as they put it:

The differential equations which govern the motion of a spherical projectile rotating about an arbitrary axis in the presence of an arbitrary 'wind'.

They argue that only gravity, directional drag (that is, acting opposite to a ball's motion) and a lift caused by Magnus force (the quick version in Wikipedia is here) are all you need to know about a spin bowler's delivery. With values for these in hand – sorry – it's possible to work out what the ball is going to do in the presence or absence of wind, at least until it hits the ground.

“In the case of a cricket ball the subtle behaviour of so-called 'drift', particularly 'late drift', and also 'dip', which may be produced by a slow bowler's off or leg-spin, are investigated. It is found that the trajectories obtained are broadly in accord with those observed in practice,” they write in the abstract of the paper.

For example, they predict that a 14km/h cross-wind would interact with the spinning ball enough to move its landing spot 14 centimetres (relative to its no-wind, no-spin trajectory), which is probably enough to make a batsman look like a tangle-foot.

Especially since, as the research finds, the interaction between spin, drag and wind accummulates during the ball's flight, leading to the phenomena of “late drift” or “late dip” that a good spinner knows and loves. 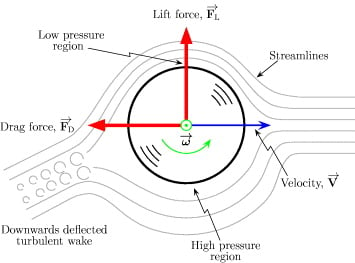 Here's your wrong'un, Warnie: a simplified diagram of the Drs Robinson's spin model

“While a ball initially with top-spin, for example, will always possess only top-spin, provided it retains its spin, the situation can be more complicated for other spin directions. For example, a ball projected horizontally with the spin axis in the same direction as the initial velocity vector will, by symmetry, initially have no lift force, but as the velocity develops a downward component under gravity, a side-ways lift force will be generated,” they write.

Apart from the intrinsic scientific interest, the Robinsons believe the paper could help engage the interest of students who might be enrolled in maths or physics, but seem to show more interest in sport.

They note that the problem of spin is also applicable to baseball, golf, and tennis, to name a few sports. The IOPScience article includes some of the Matlab models, so that budding doctors of spin can test some of the maths for themselves. ®