The LED array really doesn’t come into its own until you make use of it programmatically. All of the Pi-Lite’s commands can be used in Python programs simply by importing the python-serial library and then writing them out as strings to the Pi-Lite’s serial port.

With deft use of the timer library’s sleep function and Pi-Lite’s ALL.OFF command, you can code up some cute animation. 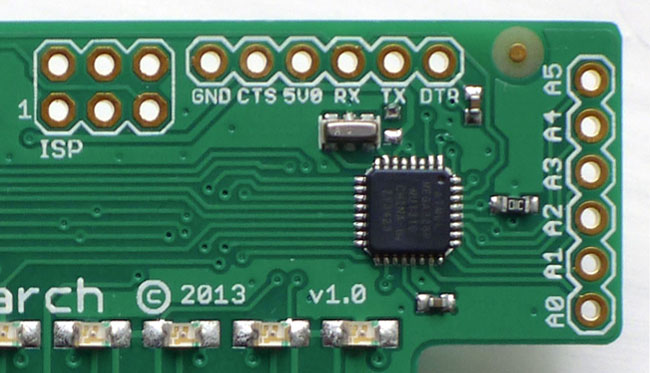 The Pi-Lite is an Arduino in its own right, thanks to an ATmega328 microcontroller. It has an FTDI header and other IO too

With a bit of savvy wiring, some GPIO pin mapping and a little code, it ought to possible to create a line of Pi-Lites as a simple, Pi-powered digital sign.

Since the Pi-Lite is powered by the Arduino ATmega328 chip, it’s also possible to write code that will run directly on the microcontroller. Your Pi will have to be loaded up with the standard Arduino development tools, of course, but quirks in the Pi’s approach to GPIO and serial connectivity mean you also have to do a little more to get Arduino programs - "sketches", in the jargon - uploaded to the Pi-Lite than simply installing and running the Arduino IDE.

Ciseco again has plenty of instructions, but there are many steps to perform and a fair few are likely to be daunting to the newbie, not only because of their opacity but because it’s so easy to miskey a filename or script instruction and cock up the whole thing.

The number of steps required to make the lights dance as required makes tracking down your error or errors that bit harder, and I found some minor errors that Ciseco itself had made. I’ve passed these on, so hopefully the documentation will be updated. 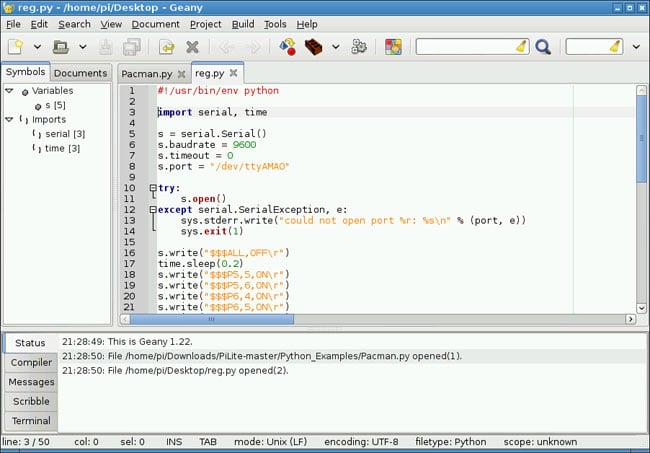 Of course, any user likely to want to upload code to the Pi-Lite’s Arduino underpinnings will probably have no trouble sorting through the documentation, and those who find setting up the Pi this way too formidable a challange have the easier option of using the pre-installed commands in their Python programs.

Ciseco could, however, do a little more to make the different ways of working with the Pi-Lite - direct input, Python coding, Arduino sketch programming - more clear to readers of its documentation so they can better choose which level of software development is best for them. Best, for example, to separate the Pi-specific information from guidance from using the Pi-Lite on its own, and not mix them up as Ciseco currently has.

The Pi-Lite documentation isn’t bad: it could just do with a little re-organisation. As is the case with most of these kinds of products, the instructions are a work in progress, and are being constantly revised and updated, so I expect they will improve over time. 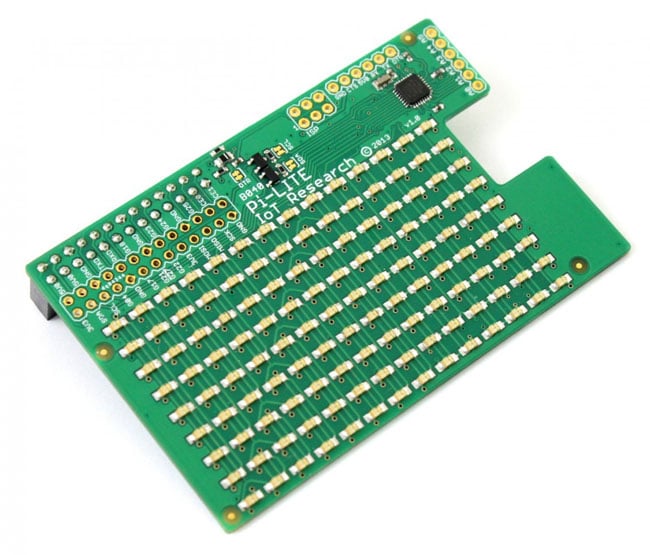 Every Pi owner’s kit box should have one?

I mentioned using the Pi-Lite without a Raspberry Pi and for this the board incorporates points to mount an FTDI pin header into which power and data signals can be fed.

Ciseco has come up with a simple, fun accessory for the Raspberry Pi that’s sufficiently inexpensive to grab just for a "see what it can do" even if you don’t have a specific usage or project in mind.

Unlike the Arduino-oriented LED arrays which inspired the Pi-Lite, the Ciseco kit comes with its own on-board software interface so it’s easy for newbies and Python fans with more experience to get it going out of the box. In fact, you can send it things to display straight from the terminal.

The only flaw, from a beginner’s standpoint, is the need to tweak key system files first. But you can’t blame Ciseco for that; it’s the way the Pi is configured by default. And, heck, that kind of tinkering was what the Pi was created to make possible.

As, of course, was mucking about with fun hardware like the Pi-Lite. Every Pi owner’s kit box should have one. ®

It's not easy to run standard Linux on a lot of single-board computers, but Armbian can help
OSes3 Mar 2022 | 21