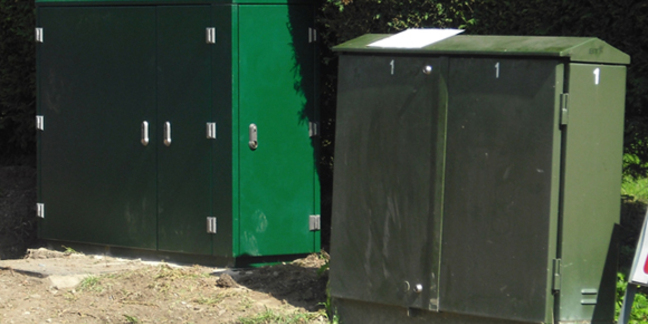 Complaints about the competitive landscape in Britain's broadband model have led Ofcom to announce a review which may include enforcing unbundled fibre-to-the-cabinet (FTTC) access.

Coming hard on the heels of a UK National Audit Office report that savaged the country's behind-schedule (particularly in rural areas) broadband project, it's emerged that Sky wants access to BT's cabinets in the form of unbundled DSLAM ports.

The Ofcom review notes that Sky has asked for unbundled fibre-to-the-cabinet, replicating the kind of competitive access that ADSL providers receive in the UK.

“FTTC unbundling, also known as SLU Bitstream, could allow a CP to rent DSLAM ports at a cabinet where BT had deployed FTTC. This could provide it with more control over the connection, including through the use of its own backhaul”, the Ofcom consultation document states.

Sky has told the UK regulator it's tried to obtain unbundled access to the cabinets on a commercial basis, but been rebuffed by BT. “If, as in the past, BT was not minded to provide such an unbundled access with the flexible backhaul options proposed, there would be considerable merit in Ofcom considering during this market review whether BT should be required to provide a SLU bitstream product”, the regulator says.

Under the current model, backhaul and DSLAM ports are sold as a bundled product. What access seekers want is to unbundle the DSLAM ports from the backhaul, so they can install their kit into the street cabinet, and run their own fibre from the cabinet to the exchange.

It's a question of considerable interest to Australian broadband-watchers: the federal opposition, sharply critical of the government's National Broadband Network, has cited the UK model as a template for its alternative model.

The British regulator also proposes that in its next regulatory period, BT could consider a trial of FTTDP – fibre to the distribution point – to assess the viability of the G.fast standard. G.fast is a very high speed, short-loop copper technology touted as being able to deliver gigabit speeds over 100-200 metres.

However, Ofcom notes: “It is likely to be a number of years before G.fast is technically mature enough for commercial deployment”, so for now its consideration will be limited to whether a pilot is required. ®