HPC Blog Yet another exciting ISC Student Cluster Competition has moved from the ISC'13 exhibit hall battlefield into the annals of history. Now that we've analyzed the results, let's take a look at the victors and their accomplishments.

Winner: Huazhong University of Science and Technology Huazhong may have taken home top honrs, but all three of the LINPACK scores are new Student Cluster Competition world records and are significantly higher than the previous world record results achieved in April at the Asian Student Supercomputer Challenge.

It's surprising to see just how quickly the students have advanced the LINPACK frontier in just the past year. At the 2012 ISC competition, the top LINPACK came in at 2.561 TFlop/s. The new high water mark, set at ISC'13 last week, is a little over 3x higher.

What's more, the LINPACK scores are a full eight times higher now than they were in 2010, when the teams first breached the TFlop/s barrier. 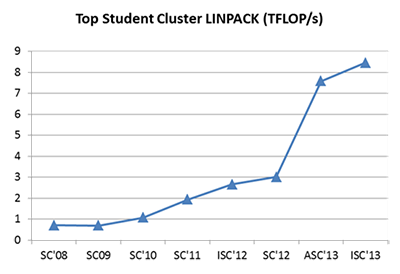 If scores were simply tracking up at a Moore's Law–like rate, we’d be seeing a max LINPACK somewhere in the 4Tflop/s neighborhood.

The top three finishers in LINPACK had a significant lead over the rest of the field. The fourth highest LINPACK score of 6.371 was turned in by Team South Africa, which (spoiler alert) ended up winning the coveted Overall Championship award.

Winner: Costa Rica Rainforest Eagles Competition for the Fan Favorite award wasn’t nearly as tight as the LINPACK or Overall Champion races. The Costa Rica Rainforest Eagles (2.0) had more than 75% of the thousands of votes received, taking the Fan Favorite crown in a walk. The voting this year was primarily online, with safeguards in place to prevent ballot stuffing or automated scripts.

The contest for the overall championship was very tight this year. Only three of the eight teams managed to turn in a result for the three disclosed scientific apps (WRF, GROMACS, and MILC) and the two surprise apps (AMG and CP2K). As those of you who avidly follow the world of student clustering know, Leipzig witnessed the biggest upset in Student Cluster Competition history.

It was a very close finish. The heavily favored Team Tsinghua landed in second place, finishing a single percentage point behind the winning team. On the application and interview categories, CHPC and Tsinghua traded the lead, with Tsinghua posting top scores on HPCC and AMG, while splitting WRF, GROMACS, and CP2K with CHPC.

The other teams weren't shut out in the scoring. Huazong won the one MILC dataset outright and finished in second or third on a number of others. Team Edinburgh topped the field on another MILC data set and finished second on the other. Team Chemnitz, with their "Coffee Table of Doom" grabbed third place on HPCC, GROMACS, and one of the WRF datasets.

One of the surprise apps, CP2K was a backbreaker for most of the field. Only Huazong, South Africa, and Tsinghua were able to complete both of the CP2K datasets.

And the envelope, please...

Winner: South Africa No one (including me) gave the South African team much of a chance to win at ISC'13. The odds were stacked against them in a number of ways. First, they were one of the youngest and least experienced teams ever to participate in a competition – all undergrad students, and young undergrads at that. 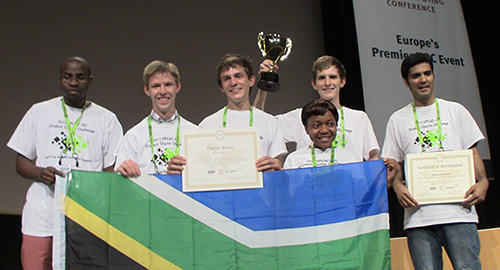 The plucky underdogs, basking in their victory

They also didn't have access to the actual equipment they were going to use at the competition during their training period. Teams typically get a chance to play around with their configured cluster well before the beginning of the contest, but South Africa didn't have this luxury.

In fact, their equipment was a day late arriving in Leipzig, meaning the team lost an entire day of vital preparation and test time. Fortunately for them, the system that was delivered was in tip-top shape, with no hardware or software problems.

It wasn't lost on the team that they were considered an underdog. One CHPC team member humorously assailed me after the awards ceremony, saying, "No one thought we could win, no one gave us a chance, even the media was against us..." By "media" he meant me and these blogs – which is kind of cool; I've never been considered "the media" before.

I think the reason the team won is because they outworked the rest of the field. They were the first team to arrive at the hall and last team to leave at the end of the day. All of their team members were in the booth working whenever I glanced over at them.

According to the team, after the exhibit hall security kicked them out at night, they would head to their hotel and work on upcoming applications well into the early hours of the morning. All this work and effort paid off in a big win at Leipzig.

So South Africa has established themselves as a player in the international Student Cluster community. While we won't see a South African team at the upcoming SC competition in November (that field is already set), we might see them compete in the Asian Student Supercomputer Challenged next spring or at ISC'14. ®