Analysis When Red Hat launched its commercialized version of the OpenStack cloud control freak in June, along with an update to its supported version of the KVM hypervisor, the one thing it did not do was provide pricing for the support contracts for this code. But when the software was made generally available for production use on Wednesday, Shadowman also announced pricing for various bundles of its Linux, KVM, OpenStack, and CloudForms software.

Red Hat's cloudy software stack is the result of more than two years of work and more than a few acquisitions by the company. And with the addition of OpenStack is competitive with what VMware and Microsoft have cooked up in their respective vCloud and Windows Server stacks.

During the Red Hat Summit in June, when Paul Cormier, president of products and technologies, announced the new software, he tossed up this comparative chart that hinted at the kind of pricing that Red Hat was thinking of for its server virtualization and infrastructure cloud software: 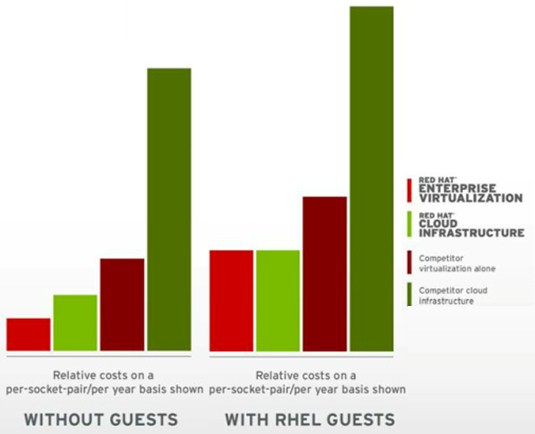 Cormier was pretty vague about who the competitor in the chart above was, but it is very likely VMware, which unlike both Red Hat and Microsoft, does not control its own operating system.

In a blog posting, Red Hat tweaked the packaging and pricing on its commercial-grade implementation of the KVM hypervisor for servers and desktops. As expected, it has merged the server and desktop versions into a single package that is now called Red Hat Enterprise Virtualization, or RHEV.

It's not clear what happens if you want to use RHEV on a single-socket PC or workstation. Presumably this is Shadowman's way of pointing out that only companies using two-socket workstations want to virtualize their machines anyway. Presumably you can work a deal if you really want RHEV on your laptop or desktop and only have one socket. Or, you can use VMware Workstation or Oracle VirtualBox, we suppose.

There are two different stacks from Red Hat that have the "Grizzly" implementation of OpenStack embedded in them, as the company announced in June.

As it turns out, there are two variants of this OpenStack variant, and they have two different prices based on the jobs they do in an OpenStack cloud. If you are getting a support license for a controller node and therefore does not need an unlimited license for RHEL guests, then it is cheaper – bBut still not cheap. And like KVM above, the licenses are sold in socket pairs.

Presumably if you are using single-socket microservers in your cloud, Red Hat does the math and cuts the node count in half to get its OpenStack support licenses.

Let's do a little math.

Ah, the bundle of joy and the joy of bundling!

If you want to go all the way with Shadowman and move from a basic infrastructure cloud with more policy-based control, metering, monitoring, and self-service, then you want Red Hat Cloud Infrastructure. This stack adds CloudForms and ManageIQ software to the OpenStack-KVM setup, and comes with a version that has RHEL bundled in and another that does not, in case you want to support another Linux or Windows on some of your cloud nodes.

The difference between those two pairs of numbers is the value of an unlimited RHEL license for this bundle, and the discounting on RHEL is not very deep at all – about 10 per cent for standard and 26 per cent for premium contracts.