DARPA has unveiled a 330-pound, six-foot two-inch tall ATLAS humanoid robot designed to save the lives of its fleshy counterparts in disaster areas, and will let seven teams of developers loose on it to compete in a $2m Robotics Challenge contest in December. 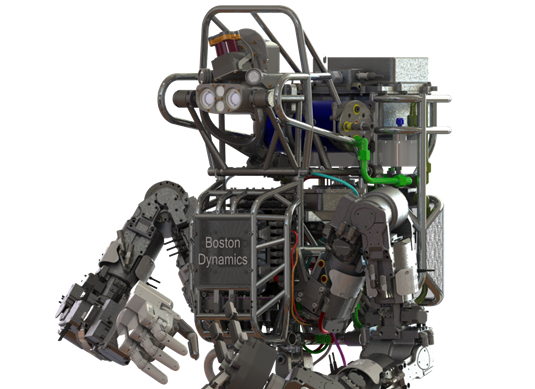 "Come with me if you want to live."

The ATLAS robot, built by Boston Dynamics, was born out of the 2009 DARPA-funded PETMAN project to use humanoid robots for testing chemical-warfare clothes. But after the 2011 Fukushima nuclear disaster, the development focus was switched to using the system in disaster situations to save human lives.

As with the 1986 Chernobyl nuclear accident, human controllers at Fukushima stayed on the job to avert a more catastrophic disaster at the facility, exposing themselves to extreme levels of radiation. Retired staff even volunteered to return and risk their own health to replace younger members of the team.

DARPA set up the Robotics Challenge contest requirements to design a robot that could operate in environments designed for humans but which were inimical to them. The successful robot will have to drive a vehicle over various terrain, clear a blocked doorway, and open it using its hands.

Once inside the test area, the robot will have to traverse rubble-strewn walkways, climb up a ladder or stairs, find and close a rotating industrial valve, attach a fire hose to a faucet and deploy the nozzle, or break through walls to reach otherwise inaccessible areas.

The ATLAS robot has a head of LIDAR and stereo sensors, an on-board control computer for balance and control, a 28-joint articulated body, and modular wrists that accept third-party hands. The robot is tethered, however, to provide enough power for full operation and communications links back to the controller.

The seven teams, which include competing techies from NASA's Jet Propulsion Laboratory and Johnson Space Center, MIT, and Caltech, have had software simulation of the ATLAS system to play with for the last month and now are getting the hardware to try out their algorithms on. Judging from DARPA's video, a rave club might be a good testing ground.

"Simulator tasks were fairly accurate representations of real world causes and effects, but the experience wasn't quite the same as handling an actual, physical robot," said Gill Pratt, program manager for the DARPA Robotics Challenge.

But the teams don't just have to use DARPA's designs; the contest is open to new robots too. The contestants are split between B and C teams, who will use the ATLAS robot, and the A teams who can design their own robots to do the job better.

It's a longstanding complaint in the robotics industry that humans aren't designed well from a mechanical standpoint (very unstable, limited joint movement and a highly vulnerable sensor package on top – not to mention locating the sewage works next to the playground) so several teams think they can improve on the design.

Carnegie Mellon University will be submitting the CMU Highly Intelligent Mobile Platform (CHIMP), a four-armed/legged robot with caterpillar tracks, which it thinks can do the job better than a humanoid robot, albeit with a communication link back to its controller.

"The progress the Track A teams have made so far is incredible given the short timeline DARPA put in place," said Pratt.

In December, the first trials for the $2m prize will take place, using either ATLAS or the A team's own designs. If no one can meet all the challenge goals, the contest will be repeated a year later, and presumably every year after that if no one manages to complete the tasks.

Such long contest periods aren't uncommon. The 2004 DARPA challenge contest to build a self-driving car took a couple of years to crack, as did its urban driving contest. Many of the winning teams went to Google, which is why you'll see automated cars certified for California's highways in 2017.

DARPA has a good record in the benefits of challenges like this and the ATLAS robots will no doubt be getting jiggy in time for the December competition. El Reg expects there'll be no winners this time round but the technology has potential, which will hopefully not be misapplied. ®