Redmond watchers discussing the corporate shake-up at Microsoft found one key figure lacking in the news: Clippy, the idiot-savant office assistant that pestered, hen-pecked, and lectured office users for a generation.

So concerned by Clippy's absence from the boardroom episode of musical chairs going on over at Microsoft was cloud storage company Box's chief Aaron Levie, that he asked on micro-chatter network Twitter the question at the back of everyone's minds: whither Clippy?

Microsoft is going through the biggest corporate reorg in history. Still no word on this guy's future. pic.twitter.com/nC3d58tHH3

The social-media mavens manning Redmond's twitter account were quick to set the story straight, we understand, but before they could they found the cold eyes of Clippy upon them, which commandeered the account to tell Levie that it had been "Biding my time. Waiting. Planning."

The widget even attached photographic evidence of its continued existence. 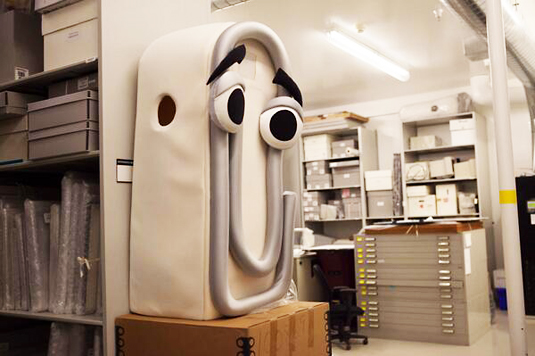 Nemesis to many, friend to no one

The picture shows our aforementioned bent metal Twitter terrorist in some kind of underground bunker where it is surely planning its next assault onto the monitors of office workers across the world. Out of the shot, we assume, are the freshly clipped bodies of those who have stood in its way.

Though Clippy came to power when it took over the UI of Office 97, its dominance of Microsoft was short-lived. A series of high-level tussles at Redmond saw the office assistant's position of power, once so strong, ebb away until it was little more than a turned-off-by-default doohickey before being phased out in 2007. It is rumored that prior to Microsoft, Clippy was used by generations of academics to organize the pages of the flesh-bound fiendish Necronomicon manuscript.

At the time of writing, Mr. Levie had not responded to our requests for information on how he felt about the Clippy revelation. Nor were we able to confirm reports that Clippy has been seen high-tailing it away from Redmond's headquarters in the hot pink batmobile Tesla that was behind the April Fool's abduction of Google cofounder Sergey Brin. ®