Gadgets are NOT the perfect gift for REAL men

Back to golf balls, socks and hankies, I suppose

Something for the Weekend, Sir? Let’s pretend it’s your birthday. For some of you, it may actually be your birthday, in which case you’re going to find this bit simple enough. Now, what kind of present would you like? Concentrate as I work myself into a trance. The mists are clearing... you want... you want... some sort of techie gadget.

Well, that was easy. You’re reading The Register, which means you are precisely the kind of individual to favour some unnecessary electronic device assembled in a Chinese sweatshop over, oh I dunno, jewellery from a lethal South African mine or designer clothes fabricated in a crumbling sweatshop in Bangladesh.

There’s also a good chance that you’re a bloke. Blokes love gadgets, apparently. If you’re not convinced, visit a branch of Menkind or browse the "Gifts for Men" section of any department store website.

Even the non-gadgety items are gadgetised in one way or another: cufflinks illuminate in the dark, leather wallets are sold in dangerous-looking gunmetal cases, and a seemingly ordinary pair of socks will convert into underwater breathing apparatus in case you need to attach a limpet mine to the keel of the Disco Volante.* 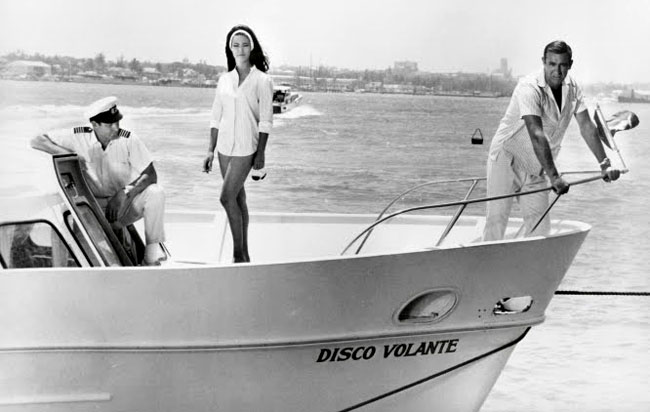 "I say Bond, where did you get those socks?"
Source: Thunderball, MGM

Worse, when blokes buy presents for women, they waste their time browsing exactly the same kind of shit despite the fact that they surely realise, deep down, that a gas-propelled garden rocket launcher probably won’t be appreciated. I should know: I’ve bought enough electronic crap for my wife over the years, thinking only about how much I would have loved to receive it myself.

If you were to ask any sane male (ie, not in the IT industry) to suggest a romantic present for a partner, he would probably come up with something unimaginative but undeniably appropriate and inevitably well-received such as flowers or chocolates. My wife, on the other hand, has been forced to endure such birthday and Christmas presents from me over the years as cordless telephones, mobile phones, palmtops, a see-through electric stapler (it was brilliant, actually) and - that most amorous of gifts - a memory and Wi-Fi upgrade.

On that note, I would like to point out that while smartphones are gadgets, of course, effectively so are the apps that run on them. My Daft Gadget App of the Week Award goes to Wanna Hang?, a GPS-based interpersonal locator that allows shy nerdy men to proposition popular women in their immediate vicinity without having to get too close. I say it’s for men but it could be used by either sex, even though I can’t imagine many women choosing to chat someone up by sending them text messages from a few feet away, asking them if they "Wanna Hang".

"Wanna Hang? is more than a social networking app,” wrote the developer’s CEO in his email to me last night. No it isn’t.

He continued: “The app enables users to directly introduce themselves to others nearby without disturbing or interrupting them.”

A new craze? Contact people without even looking at them

So loitering shiftily behind a pot-plant while trying to send a greeting via mobile phone to someone you don’t know on the other side of the room qualifies as “directly introducing oneself”? Wow. And I thought I needed to get out more. In comparison to Wanna Hang? users, I’m positively vivacious.

Anyway, back to presents. For the Dabbsies, July is a busy month for gift-buying as at least half a dozen members of the extended family celebrate their birthdays within days of each other. My problem is that the next one coming up is that of my father-in-law who, despite being a man, does not seem to like gadgets. He is neither a nerd nor suffers from pretensions of intellectualism. He does not read sci-fi or fantasy, and will certainly not understand the photo caption gags printed on those otherwise hilarious Star Trek mugs.

He is, as you might have guessed, a "real" man.

Once, while assisting on-site with his son’s tree-cutting business, he entered into a polite but astonishing conversation with a female customer - a housewife - about the pernicious spread of gadgetry in the modern world. He gave, as an example, the humble washing machine. When the customer jokingly argued that she could hardly be expected to take the family clothes down to a river and bash them against a rock, she was appalled to see him merely shrug.

She suggested that his son’s business ought to get rid of their chainsaws and switch to good old-fashioned axes. The thing is, my father-in-law would probably do this if he thought they could still earn a living. I think I’ve just unfairly painted my father-in-law as some kind of Imam advocating a return to the Stone Age, but my point is simply that this is the kind of person who can’t locate a 2cm-diameter "On" button at the front of the family’s desktop PC. Somehow I get the impression that buying him a USB-powered coffee mug warmer for his birthday isn’t going to go down very well.

Unfortunately (not for him, naturally) he is not a golf player, nor a smoker, nor a big drinker, nor someone who enjoys sneezing into a square of fabric that’ll end up, crumpled and snot-filled, in amongst his weekly washing and which can only be cleaned with an extra machine cycle or by slapping it with additional force against a rock by the stream. What I should do is choose something sensible, an item he can use every day in a very practical sense, and certainly not a mere waste of cash on some gadgety nonsense.

Alistair Dabbs is a freelance technology tart, juggling IT journalism, editorial training and digital publishing. The best Christmas present he ever received EVER was Billy Blastoff. It was the year of the first Moon landing and he entertained himself with this toy for another two years at least before getting around to breaking it.

Who, Me? Sure, I’ll sit here all day taking notes because you’re too cheap to print them out
Personal Tech3 Oct 2022 | 5

Moody's turns up the heat on 'riskiest' sectors for cyberattacks