Is it a BIRD? Is it a plane? Right first time – and she's in SPANDEX

So have you ever been nicked while trying to fight crime?

As a superhero, his proudest moment was saving a city building from hordes of protesters during riots last year. "The coolest thing I've done is stopping a terrorist attack," he says, although its not clear the rioters were actual terrorists. 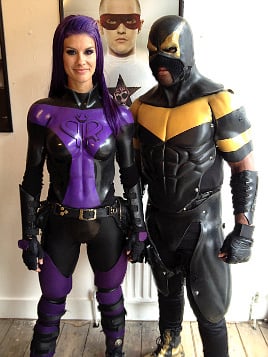 "This bunch of black bloc protesters came in from out of state and decided to break into a federal building," Phoenix says. "So I went in and stopped them. It was just me and a few friends versus all these rioters. It was turning into a pepper spray, fist fight storm when the police turned up. I though they were going to arrest me and the lead officer was like: hey Phoenix, you take that side and I'll take the other. Best moment ever! I've never been arrested since that."

El Reg spent a whole day at Huawei's superhero conference, hearing about the technology that might one day makes us superheroes. Dr Morgaine Gaye gave us a taste of her supershake, which tastes like an Innocent smoothie blended up with sawdust.

"It's so supercharged that there's no vital mineral, micro nutrient or vitamin that's missing from it," Dr Gaye claims. She divvies up the world's nutrients into portions weighing no more than a human hair, which are then put together into a noxious tasting powder. Drink it, she says, and you'll have more energy, kick your sugar addiction and feel pretty super-heroic. "It's my passion," she insists when we ask her how many sales she makes. "I don't want to be like Gillian McKeith, working on an industrial scale and getting my stuff in Sainsbury's."

Which is lucky, because at 27 quid for a packet, it's not likely to fly off the shelves.

Superheroes don't just bash people up, he says, but do small things to help people. One striking lady he's met called Nyx manages to wear a low cut top and fishnets while patrolling the streets, helping the homeless, and this is more typical than the Phoenix Jones style basher-upper, he says.

"One superhero I went out with gave a homeless person a razor, so he could prepare for a job interview which could change his life," he says. "You could call this costumed activism. These guys are symbols of personal capabilities to make changes in the world."

Right, what about the phone?

So you've heard about the superheroes, now what's the phone like? Well, it's OK. It's got a nice shiny screen complete with graphic design that looks a bit like the early levels of Sonic the Hedgehog. The icons rotate around it, forming a tombola of useless apps, and because it's Android, there are all sorts of fiddly customisations you can perform which would send fanbois and fangurlz running as if a spandex-clad loony was chasing them. 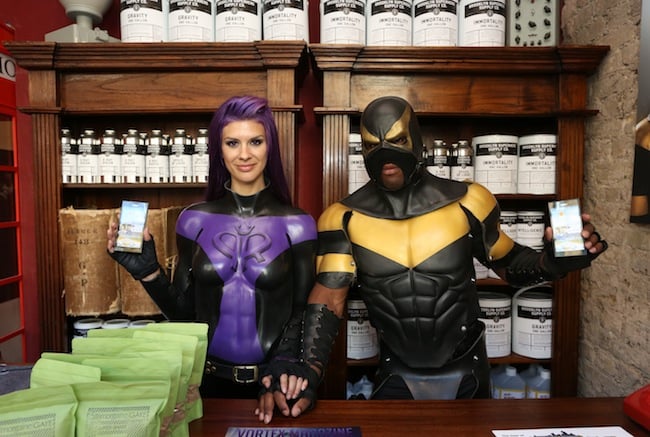 The happy couple, complete with the smartmobe we were (supposedly) there to see.

According to the marketing spiel (which fails to really explain the superhero connection) it's also speedier than any other phone on the market, with a super-fast, 150Mbps 4G connection. However, the closest it will get you to fighting crime is when you go down the local police station to say that someone's nicked it off you.

Superhero Phoenix is clearly taken with it. "I wanted to be rude and sceptical about this phone, but this is faster than my iPhone," he says. "I love it. By the way, they’re not paying me to say that."

We're not going to disagree with you mate - sorry, sir. ®