However, if all you had was a single server, it was also overkill: you had to have a tree, even if it only had one branch. Server admins cursed and hated it for the considerable extra workload it imposed compared to NetWare 3.

But that wasn’t NetWare 4’s only problem. The other was Windows NT, from Microsoft.

NetWare 4 itself was the most versatile NOS Novell had ever offered – its range of NLMs added significant extra functionality – but it was still built around file and printer sharing. For instance, when NetWare mounted a disk drive, it stored the entire FAT in RAM. The relationship was linear: the bigger the disk, the more RAM required, or you couldn’t mount it.

If you wanted app servers too, that meant yet more server RAM. And all these processes ran in Ring 0, meaning that a bug in any module caused the whole server to ABEND*. In other words, your server would hang

Windows NT, on the other hand, was a general-purpose OS that natively spoke TCP/IP – or Internet Protocol as we used to call it. It had the familiar Windows user interface, as opposed to the remote-server-console admin of NetWare.

The first version of NT, disingenuously called Windows NT 3.1, was quite immature, but adding additional server functionality was much easier (and often cheaper) on Windows NT than on NetWare.

The golden version of NetWare 4 was really 4.11, dubbed IntraNetWare by Novell's marketdroids in 1996. Out of the box it could act as a web server, a proxy gateway and firewall and more - for a price, of course. There were also – finally – graphical server admin tools that ran on Windows.

But by then, Windows NT 3.51 was out – a really solid, stable version, albeit with the retro Windows 3.1 GUI.

For a small network, NT was a much easier and more flexible server and there was no need to muck around with a network directory: for just a few servers on a single site, domains were much easier. In July 1996, along came NT 4.0, which added the Windows 95 Explorer to NT.

Domains quickly became a liability if you had lots of Windows servers, or a large, multi-site network, where NDS came into its own, but the battle was over.

By 1995, Windows NT was a capable server OS as well as a client, handling file and print and application services with equal facility. Meanwhile, the World Wide Web was forcing a rapid adoption of Internet protocols, which NT handled natively but that were awkward bolt ons to NetWare.

Ubiquitous connection to the internet also brought Windows’ many security issues into sharp focus, but by the time of NetWare 4.11 and NT 4, another new server OS was becoming viable: Linux. It needed a skilled techie to wrestle it into submission, but as a cheap, secure firewall or Web server, it was unbeatable.

NetWare didn’t die, but it started to fade away. In 1998, NetWare 5 featured native TCP/IP and Java-based server apps, including a GUI on the server itself. The new NetWare Storage Services filesystem finally broke the linear relationship between disk size and server RAM.

The last version of NetWare was 6.5 in 2003. NetWare now supported many Unix-like services and features, for easier Linux interoperability – but more to the point, all the NetWare server functionality could also run identically on SUSE Linux Enterprise Server. In the Novell Open Enterprise Server box, you got both products, one based on NetWare and one on Linux.

Novell didn't die either. Not exactly. It hired former Sun Microsystems' chief technology officer Eric Schmidt - yes that Eric Schmidt - as chief executive to take it into the internet era. It also bought open-source apps and SuSE Linux to move into open source and Linux. The company also signed a patent-licensing agreement with Microsoft to help sales of that SuSE Linux distro by shielding users from any patent claims by Microsoft.

All the time, though, the momentum behind Novell business as a whole was downwards. Schmidt joined Google, Novell annoyed open-sourcers and enterprise software holding company Attachmate eventually bought Novell for $2.2bn in late 2010.

Looking back, what could have been one of NetWare 4’s key features, though, was that peculiarity of booting from MS-DOS. Soon after launch, NetWare 4.01 gained support for another host OS: IBM OS/2 2. 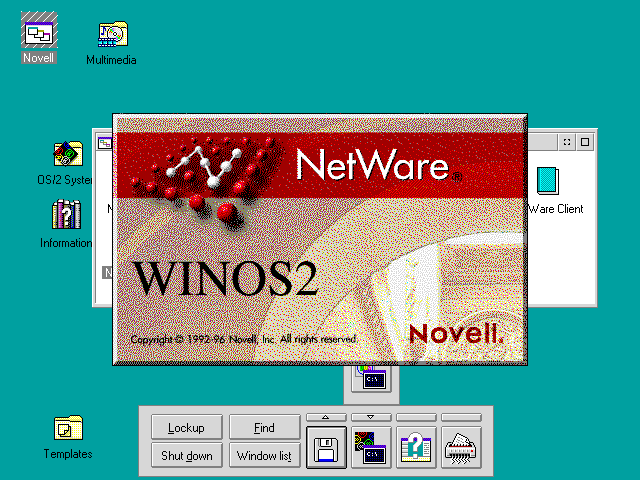 A splash screen added to Win-OS/2 by the Novell NetWare client. Image by Michal Necasek, os2museum.com

But as OS/2 was a proper multitasking 386 OS in its own right, NetWare for OS/2 conferred all sorts of useful abilities to NetWare – such as the ability to run the server and the client (with its admin tools) on the same machine, plus running DOS and OS/2 server applications outside of NetWare while still providing the same high-performance NetWare services.

As OS/2's security was based on domains just like NT's, NDS was a valuable enhancement, too.

Of course, OS/2 itself flopped, so none of this ever mattered, but with hindsight, it was an excellent answer to the threat from Windows NT. If it had been marketed correctly, it could have benefited both products.

NetWare was almost uniquely a thing of its time. Whereas the PC has transcended its roots as a slightly shonky take on the Apple II, and Windows has grown from a limited CP/M-lookalike into a sophisticated 64-bit OS, NetWare never escaped as its niche.

When Windows was just a client OS, Novell’s proprietary IPX/SPX protocol and simple, fast, semi-dedicated file servers were a compelling offering. As Windows grew into a server OS too, though, NetWare couldn't compete. ®