T-Rex tooth find shows dino may have been a pussy

Prey walked away with fang embedded in spine 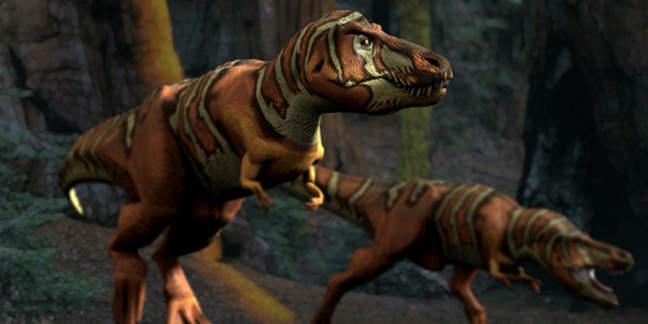 Dino-boffins have found a Tyrannosaurus Rex's tooth embedded in the spine of another dinosaur, a find that confirms the creature was a predator but calls into question just whether it was really as fearsome as has often been imagined.

Detailed in a paper titled “Physical evidence of predatory behavior in Tyrannosaurus Rex", the scientists explain their find of “a tooth crown embedded in a hadrosaurid caudal centrum, surrounded by healed bone growth.”

That the tooth made it into the hadrosaur (the generic term for duck-billed dinosaurs) is taken as incontrovertible proof that T-Rex was a predator, welcome news for past depictions of the dinosaur as living atop the food chain.

That the attack failed - as shown by the bone healing - and the putative prey walked away is harder to interpret. The boffins note that T-Rexs grew lots of teeth and old, blunt, ones fell out. It is therefore not unreasonable for a tooth to become dislodged in the heat of battle. The authors also point out that it is very unusual to find evidence of dinosaurs surviving an attack, which could mean this fossil is an anomaly and T-Rex really was a stone cold killer.

They also feel that the T-Rex in question may not have been fully-grown, which could show that little Tyrannosauruses had to cut their teeth before becoming the hyper-efficient killing machines of our collective imaginations. ®