Will tiny wannabes ever topple the giants?

An IBM SAN Volume Controller (SVC) v6.4 with a Storwize V7000 disk storage array delivered 14,581 SPC-2 MBps with $129.14 a price/performance rating, putting it in second place. You can read the exec summary of the IBM run here (pdf).

A separate SPC-1 benchmark looks at random I/O in a business environment. The all-flash V7000 was faster than a ZFS 7420 in an SPC-1 run, unsurprisingly. This SPC-2 run used all-disk V7000s, however. Fast disks are great at streaming data.

The chart plots MBps values against price/performance ones, with the lower right-hand chart area representing the best mix of performance and value. 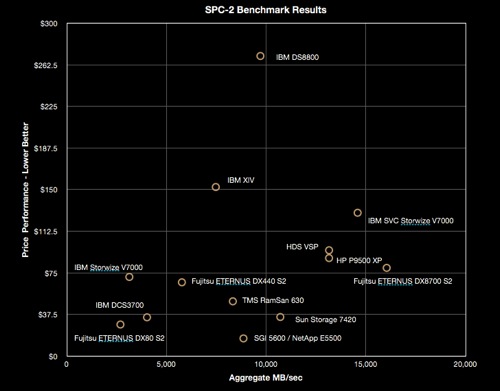 We can see that the Fujitsu Eternus DX8700 S2 is in pole position for its combined performance and price/performance ratio.

Perhaps HP, with its newer 3PAR (StorServe) arrays, might be able to beat the Fujitsu system. IBM is also a strong contender, if it added more V7000 nodes or went all-flash.

We look forward to a pushy all-flash array vendor – say, Nimbus Data, Pure Storage, Violin Memory or Whiptail – testing their arrays in the SPC-2 benchmark arena. Bring them on. ®