'Are you exploiting your monopolistic position', asks PAC chair

BT's policy supremo was mauled this afternoon by MPs demanding to know why the telecom giant's investment in the UK's government-subsidised broadband deployment had dramatically shrunk.

The company is the only telco to have won any of the taxpayer-funded Broadband Delivery UK (BDUK) contracts to roll out high-speed internet access across Blighty. And it's set to bag all of them after Fujitsu, its only competitor, withdrew from the race for the £1.2bn pot of cash earlier this year.

Parliament's Public Accounts Committee chairwoman Margaret Hodge questioned BT's financial commitment to the entire project during a hearing today: in 2012 BT pledged to plough a "further £1bn" of its own money, as well as the government's BDUK funds, into providing broadband to the final third of the country where private investment had been deemed not commercially viable.

But the National Audit Office (NAO) recently claimed that BT would in fact contribute just £356m (23 per cent of capital costs) for its heavily subsidised rollout of mainly fibre-to-the cabinet (FTTC) broadband technology.

According to the spending watchdog, the Department for Culture, Media and Sport (DCMS) - which is steering the BDUK project - had been "too optimistic" about BT's contribution.

At the time, BT disputed the auditors' figure and said that it was well on its way to committing total funds of around 38 per cent of the entire programme by the time it completes in 2017. 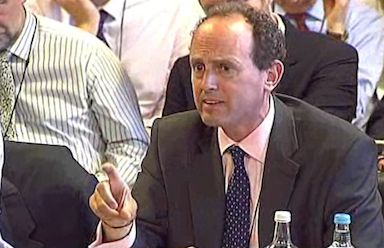 However, BT was not only talking about capital expenditure on the actual broadband hardware, but also its own operational costs in the meantime. It was a point not lost on Hodge, who was scathing about BT's sums when its policy wonk Sean Williams tried to defend the numbers.

Williams insisted that BT had pledged to spend up to that amount during the life of the BDUK project. He explained: "We expect to be contributing over £700m."

Hodge interjected and asked why that the figure didn't "marry" with the £356m stated by the NAO. The BT man said that the spending watchdog had failed to account for operational costs such as labour payments.

But the PAC chief insisted she was only interested in knowing about cap-ex and chided BT's figures: "You're getting £1.2bn of capital assets for free from the state," she thundered. "That's our money, not your money."

On charging rivals to access BT's infrastructure, Hodge asked Williams: "Are you exploiting your monopolistic position to charge whatever you want?"

Her question came after TalkTalk boss Dido Harding, whose company objects to BT's alleged margin squeeze in the pricing of its fibre, had told the committee that BT was "doing an excellent job of rebuilding its monopoly".

Harding claimed that BT would "like to have an unregulated fibre market for as long as possible" to see off its rivals.

She said that retail competition in the market was really important and added that consumer choice was needed to prevent low take-up and high prices for super-fast broadband services.

Earlier in the grilling, UK Broadband chief Nicholas James - whose company is the largest commercial holder of national radio spectrum in the UK - had told the panel of MPs that "there was no way we could join in the [BDUK] process because of the way the process was structured".

He explained that part of the problem was the way in which the geographical areas had been carved up, arguing that it was harder to have a viable business case for investment in small pockets of the country.

James further claimed that the original plan floated by the DCMS was for there to be 100 per cent access to next-generation broadband across Blighty, but that it was later reduced to 90 per cent in a move, that he alleged, favoured BT.

James added that many telcos withdrew from bidding for the BDUK contracts after the government "took the goalposts down".

To date, he noted, BT had failed to provide details about the final 10 per cent. The UK Broadband boss declined to blame BT for nullifying competition, however.

"We're all in the business of influencing," he said. "It's not BT's fault, but the fault of the officials who allowed themselves to be lobbied ... we haven't had a robust process."

Malcolm Corbett from lobby group the Independent Networks Co-operative Association told the committee that county councils and other local authorities were "fed up with the lack of competition", and claimed they "faced real challenges trying to get value for money for their ratepayers".

He added: "Everything is halted because no one knows where the final 10 per cent is."

At one point, Hodge asked Williams: "As you are a monopoly provider, why on Earth do you resist total transparency?"

The BT policy wonk insisted that the company was "providing 100 per cent transparency to the local authorities".

But when pushed to reveal details about the final 10 per cent figure, Williams said it was up to councils to decide. He agreed that there was no objection from BT allowing for full disclosure of those details.

Towards the end of the grilling, Hodge ordered BT to release that information. She told Williams: "Your concept of transparency doesn't make sense to us ... you really ought to have total transparency on the issue of costs."

The BT man told the panel that BT would write to the MPs to "respond to the unfounded allegations made here today". Hodge shot back that BT was "blackmailing the public by only saying you'll do it if given a taxpayer subsidy ... it's an outrage".

In a second PAC session, the MPs hauled in DCMS Permanent Secretary Sir Jonathan Stephens. He defended the BDUK bidding process and told the committee: "No one else was offering more to do less", and insisted that BT offered a "lower cost and lower risk to the taxpayer". ®