Scream if you wanna go faster - oh, you are

Samsung has developed its first NVMe-connected 3,000MB/s solid-state drive (SSD). And it is extending its three-bit-per-cell range of flash storage with a 1TB whopper.

NVMe stands for Non-Volatile Memory Express, and is a standardised protocol for applications to access data stored on PCIe-connected SSDs via a software driver. Currently each PCIe SSD on the market has its own data access protocol and needs its own specific driver. By standardising on the NVMe protocol, only one host operating system driver is needed to access any manufacturer's NVMe-compliant SSD.

It has three capacity points; 400GB, 800GB, and 1.6TB and comes as a 2.5in form factor PCIe-connected drive aimed at the enterprise market.

Unsurprisingly, Samsung said it expects to develop even faster NVMe products over the next few years. 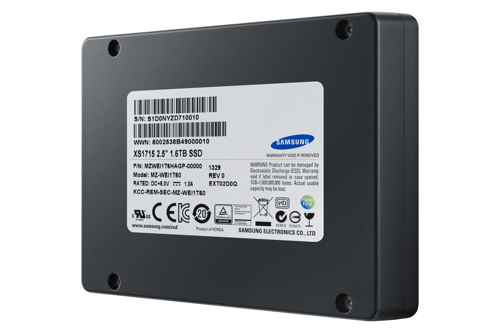 Meanwhile, the new 840 EVO drive is an extension of Samsung's 840 line of three-level cell (TLC) flash storage. TLC flash is slower than two-bit MLC flash and has a decidedly shorter working life, attributes that need to be countered by controller technology and over-provisioning. But the stuff is the cheapest kind of flash so, if it can be given adequate speed and endurance, it will appeal to some as an alternative to hard disk drives.

As reported in Storage Review, which was at the Samsung Global SSD Summit, the 840 EVO offers 120GB, 250GB, 500GB, 750GB and 1TB capacity points using 19nm NAND. The controller is Samsung's own multi-core MEX unit. The SSD provides up to 98,000/90,000 random read/write IOPS and 540MB/sec sequentially reading, 520MB/sec sequentially writing. These numbers vary with product capacity.

It's intended as an affordable consumer-class SSD. At present there's no indication TLC flash can be made good enough for enterprise use. The amount of over-provisioning and complex controller tech needed for enterprise-class speed and reliability would probably nullify its raw cost advantage.

There's no word on the 840 EVO's price and affordability. ®