1953: How Quatermass switched Britons from TV royalty to TV sci-fi

All that stomping around in gaberdine coats, occasionally removed to reveal further layers of tweed and rough knitwear seems terribly crude and 1950s, but there’s only so many sets you can squash together, even within Ally Pally.

Together with all the pipe smoke and bad lighting, you can almost smell the slightly cabbagey, make-do-and-mend atmosphere that continued to pervade the UK long after the war. A couple of months before Quatermass, after all, the British had been granted extra egg and sugar rations so they could make cakes to celebrate the coronation.

But if some of the backgrounds look seriously flakey and un-sciencey, remember we’d won the Battle of Britain just over ten years earlier with crude radar, a big paper map and some aeroplane cut-outs moved around by long sticks. A lack of “screens” in the lab? Remember, we’d only just gotten TV for the coronation. And Bernard Lovell’s search for cosmic rays up at Jodrell Bank used dials and printouts for years after Quatermass was broadcast.

If the idea of a British Experimental Rocket Group seems like an end-of-empire absurdity, remember, the UK had contributed mightily to the Manhattan Project (which developed the atomic bomb) and had just tested its own independent nuclear weapons.

Arthur C Clarke had just advanced his communications satellite ideas. British boffins were doing some terribly clever things in the 50s despite the material restrictions imposed on them - the BT Tower was being planned as the hub of a comms network that could survive nuclear war, and it wouldn’t be long before Brits cracked the underlying tech of optical fibre. 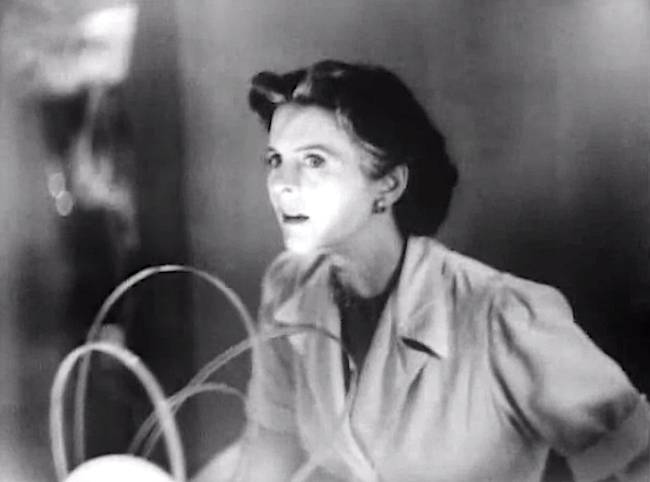 Quatermass ... is this the optic fibre you're looking for?

As for rockets? The Brits did have experience of rockets, having been the first real targets of Werner von Braun’s creations less than a decade before.

Talking of Hitler's V weapons, it’s intriguing that one of the Quatermass crewmen - only ever seen in flashback mode - is a German. What would his previous qualifications for joining the BERG have been, we wonder? The fact that both the Russians and the US had co-opted the brains behind the Nazis’ rocket efforts had already been widely reported, so our Teutonic friend's backstory wouldn’t have been hard for many Britons to fill in.

We could interpret it in a number of ways. The UK joining with an old enemy, with the sub-text of facing off against the East. Or perhaps striving to compete with the US too. And that monster - borging individual consciousnesses - could easily be seen as a metaphor for communism, or even consumerism. All a good few years before US citizens were reborn as plants in Invasion of the Body Snatchers - another classic where it’s not really clear if the enemy is communism or consumerism.

Saving mankind is a “big picture” type of thing, but Quatermass ultimately does it by appealing to individual humanity on a personal, intimate level. Duty and all that. The same duty that led Judith Caroon to renounce her plans to divorce her husband Victor when it became clear he was a sick man – but, of course, before she realised he’d been absorbed by a giant plant. This seems very 1950s, the same dutiful approach to romance seen in films like Brief Encounter.

Either way Kneale leaves us feeling that individual decency, as well as a firm grasp of science, is the only thing between us and the darkness outside. That darkness could be geo-political, it could be rebellious nature, it could be something from outer space.

Or it could simply be the claustrophobia induced when placing our trust in a set of flickering figures working in a tight-knit fantasy group, going through an elaborate but terrifying performance script being filmed live and broadcast on tiny sets.

I am, naturally, talking about the best of British sci-fi. ®

Next: Not for children and those of a nervous disposition... Quatermass II

Top tip: Using AI to detect alien civilizations is dangerous because if it spots anything, even just a blurry blob, people are going to go nuts