We're pleased to report that the intrepid Playmonaut who last weekend soared to 34,571m (113,421ft) during the test flight of our Special Project Electronic Altitude Release System (SPEARS) control board is, although somewhat shaken, otherwise none the worse for suffering a dramatic stratodangle.

Our intrepid miniature pilot was strapped into the cockpit of the Covert High Altitude Vehicle (CHAV) - an all-paper aircraft designed to have a pop at our own Guinness World Record for the highest launch of a paper plane: 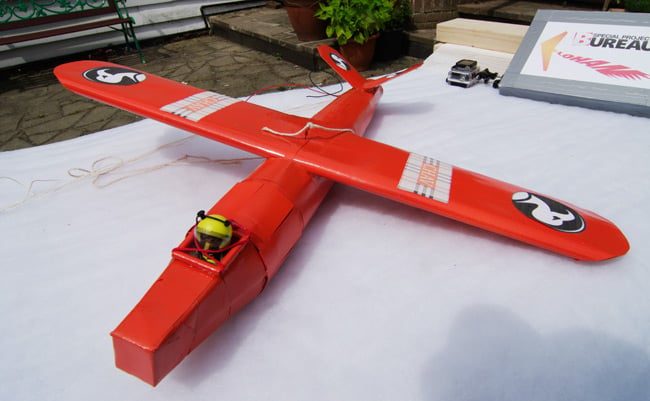 The attempt was a bit of fun, and secondary to the mission's main objectives of testing the SPEARS board, the Clockwork High Altitude Release Mechanism (CHARM) and the custom igniter for our Vulture 2 spaceplane's rocket motor.

However, the flight turned into a white-knuckle ride for our diminutive adventurer, who ended up hanging beneath the main payload box during a high-speed return to Earth that ended in the treetops on the edge of Salisbury Plain.

The ascent was uneventful, although this still taken from the main payload video camera shows a problem with the drogue parachute which would ultimately leave the CHAV suspended in space: 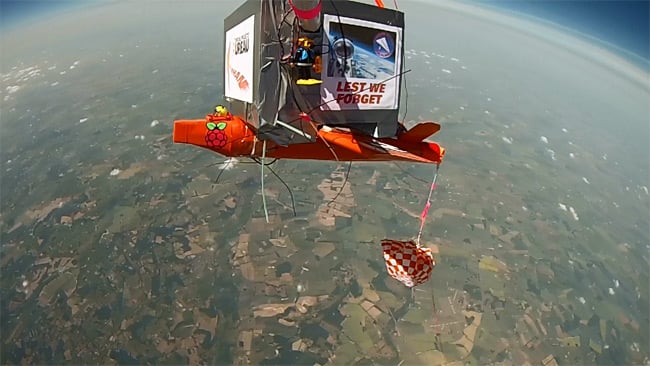 We'll explain the parachute palaver in a minute, but first we thought you'd like a few snaps of the construction of the CHAV, based on the tried-and-trusted paper straw and A4 paper methodology as used in our Paper Aircraft Released Into Space (PARIS) Vulture 1.

The fuselage was put together from laminated paper bulkheads and straws... 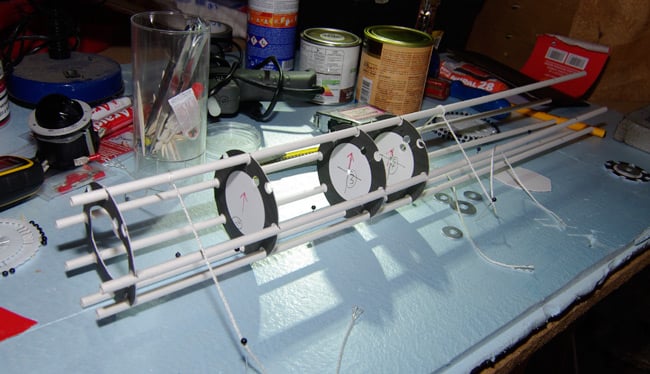 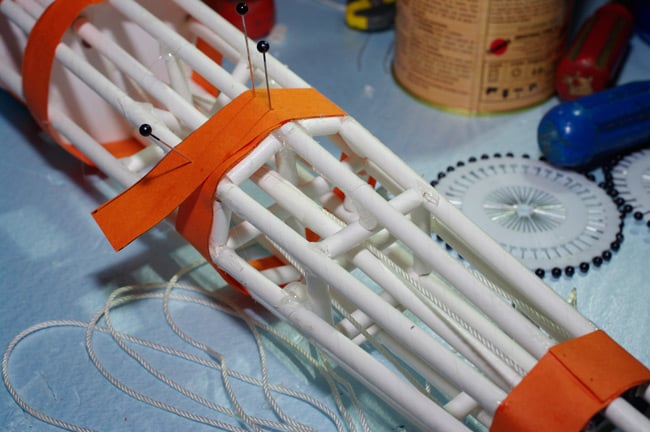 The nylon cords in the above pic are the parachute lines, glued into three bulkheads to ensure the 'chute's deployment didn't rip the CHAV's tail off.

Our Playmonaut was positioned in a nose podule, detachable to allow insertion of the aircraft's electronics in the main fuselage: 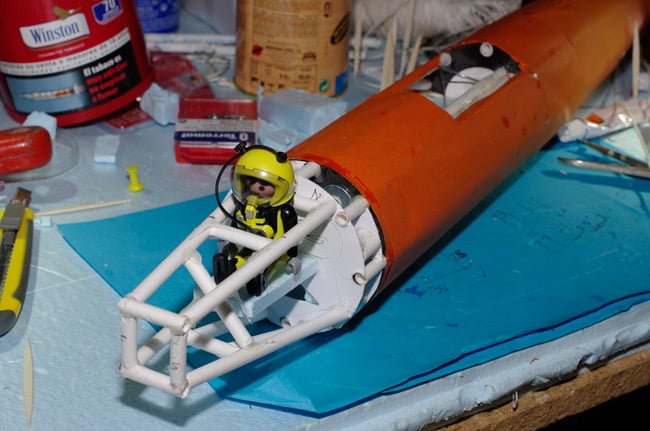 The wings were a bit of a departure from the Vulture 1, being formed from laminated paper sheets glued together with Photo Mount, and then laid over a balsa-wood form in a vacuum bag and left to dry for three days. Once the form was removed, we had a one-piece main wing structure which we then reinforced with paper straw spars. 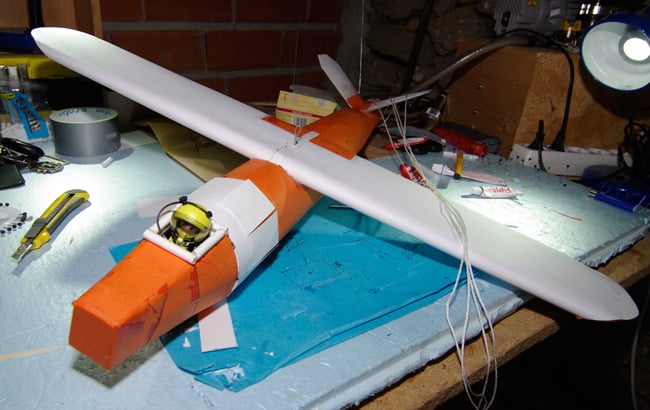 The original plan was to vacuum-form the entire aircraft using newspaper, or Advanced Fibre-Reinforced Organic Composite (AFROK) as LOHAN team member Neil Barnes dubbed it, but this proved impractical in the time available.

Sadly, then, our intention to use the Guardian for the left wing and the Daily Mail for the right wing - thereby achieving perfect aerodynamic and political balance - came to nothing.

The whole aircraft was designed and put together in just two weeks of evenings and weekends - a timescale which reflects the benefits of already having one paper aircraft build under our belts.

So, last Saturday we were ready to install the Raspberry Pi tracker/camera kit... 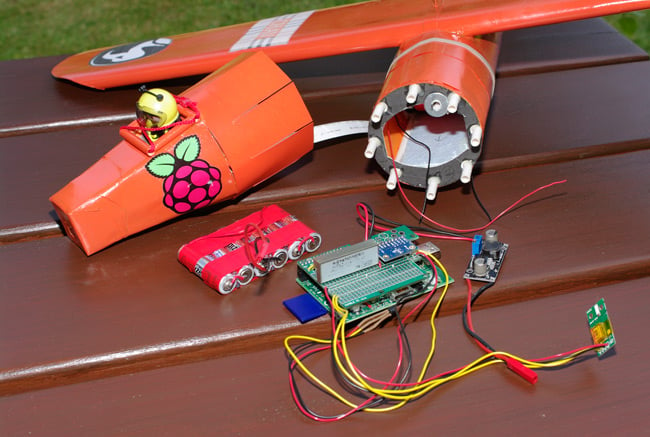 ...and the parachute, which was packed in a tail-mounted tube with an exposed drogue, as Dave Akerman and Anthony Stirk demonstrate: 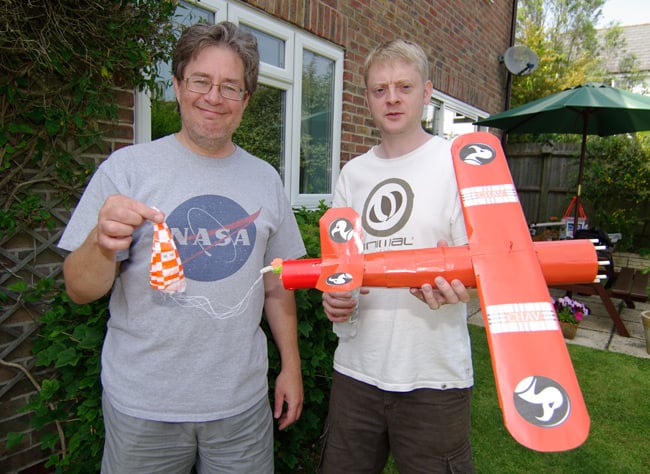 The parachute is a Civil Aviation Authority (CAA) requirement, and in the absence of a mechanism to deploy it at height X - due to complexity and time restraints - we decided to pull the 'chute out right after aircraft release using a static line attached to the main payload box.

Regarding the release mechanism, here's diagram of just how that works, with the LOHAN igniter burning through a cord attached to a steel wire loop glued into the top of the CHAV's fuslelage, and kept under tension by a spring-loaded balsa pressure plate covered in Teflon tape, so the plate couldn't freeze to either the payload box or the aircraft: 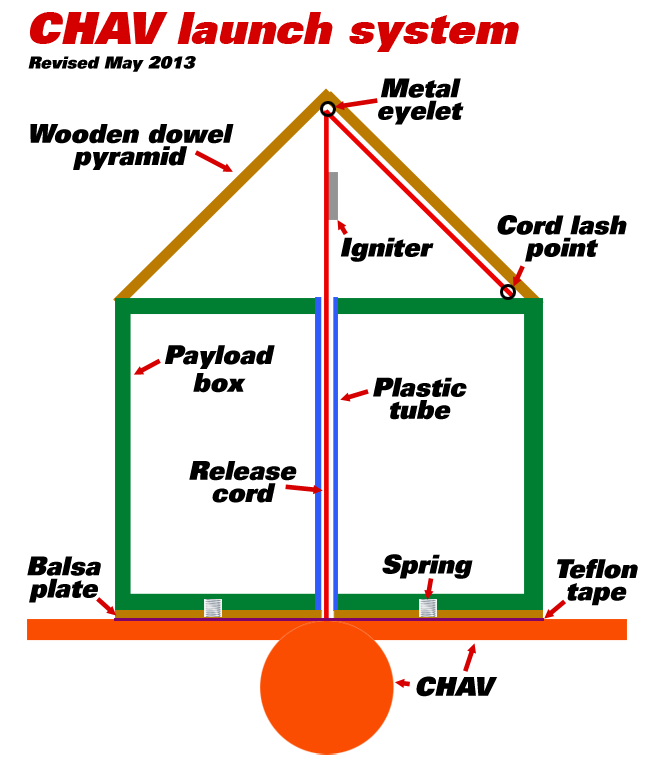 The plastic tube is simply to avoid the release cord tangling on something inside the payload box as the plane drops away. Here's the pressure plate during the main payload construction... 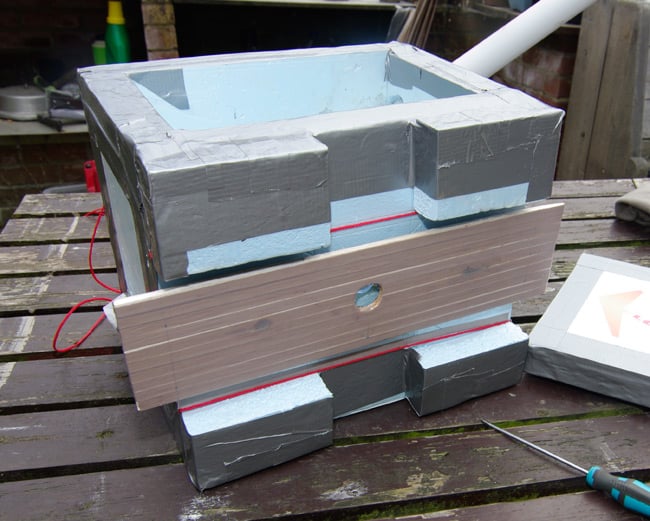 ...and here's the aircraft during a test coupling, before we installed the Picam in the CHAV's nose podule: 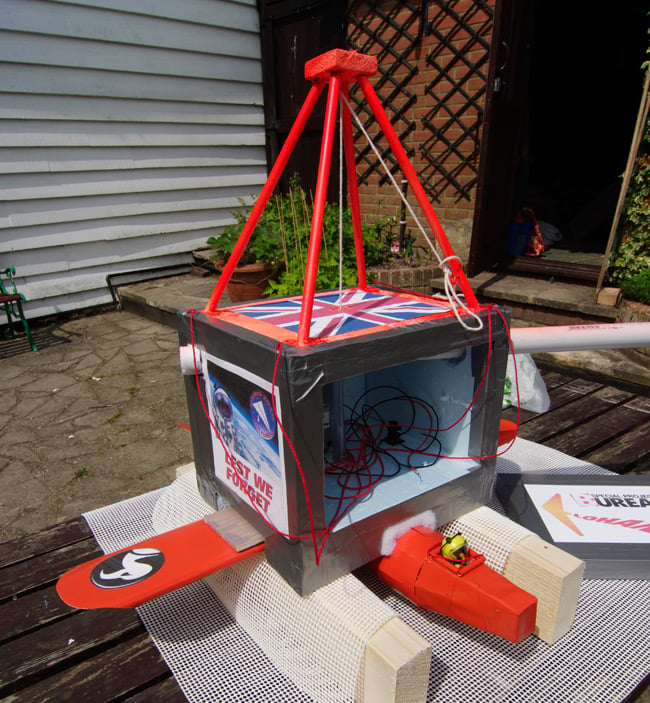 Meltdown due to Big Brother voting?

Eccentric ex-spook checks in from fruitcakeville