I tried it with another monitor so that both displays were running at full HD and selected the extended desktop option. This choice gives you the traditional desktop on the external screen and the tiled view on the ThinkPad display.

Moving the mouse cursor between screens works fine in the normal notebook docking setup, but in presentation mode, the keyboard, Trackpoint and Trackpad are completely disabled and there's no way of navigating to the extended screen area - unless of course, you hook up a mouse and keyboard (yes, I tried it) which rather defeats the object. The lesson to be learned here is to stick to display mirroring if you're planning on some big screen action in presentation mode. 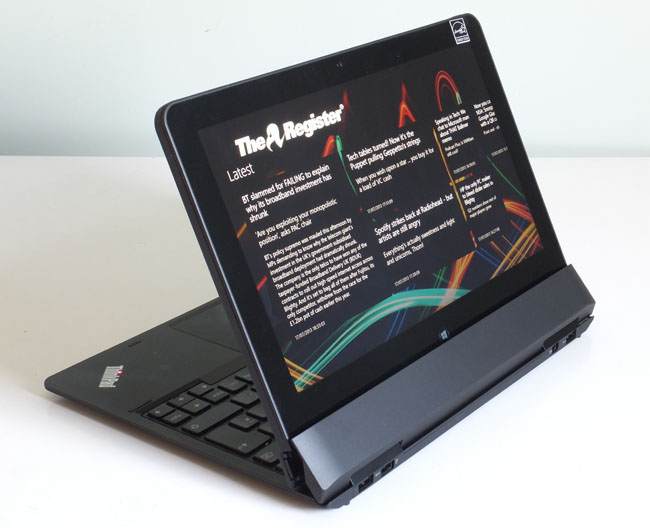 Whip it out, turn it round, slot it in again and, hey presto, Presentation mode

Regarding presentations, I wondered if the pen – that's neatly squirrelled away in a corner on the tablet – would be an improvement. Acting on this idea was the moment when I found out the digitiser didn't work. For some reason all the Touch-related control panels didn't include access to any pen options.

After a good nose around Lenovo’s drivers and support pages, I mentioned this issue to Lenovo’s PR in the hope of a solution. I was sent another Helix and all was well with the pen. It aligns fairly accurately – better than the Sony Vaio Duo – making it easier to navigate control panel checkboxes and suchlike on the full HD display.

Before the replacement ThinkPad Helix appeared, I’d started on testing its 3G SIM connectivity. There’s a full-size SIM card in the box enabling access to Lenovo’s mobile broadband service. Annoyingly, registering for this didn’t work. Instead, a message reporting that the “Provided device ID does not match” appeared.

Click to the next page on the Mobile Access app and you get a list of phone numbers for each territory. I gave it a try and a few option presses later had someone "escalating" my issue with the promise of an email resolution, eventually.

Various emails have thus far appeared one asking me to verify I exist and the other promising the problem is being worked on. Apparently I’m activated now, but on this blighted Helix, it doesn’t want to play.

So, what next? See if it boots in Linux or discuss the tablet experience? You decide... OK, Linux it is then.

I have to say that for all the faffing about with the Helix in other areas, getting it to run on Linux is hands down the easiest experience I’ve had on a Windows 8 machine. As usual, go to the Settings > General > Advanced Start and following I reboot I chose the Boot Menu option.

Here, the LaCie USB stick loaded with Pen Drive Linux was showing and I could select it from the touchscreen too. Reboot again and we’re away... just make sure you’re using the docking keyboard as you’ll need to press enter to get Ubuntu up and running.

Bear in mind, there’s no touch option at the Ubuntu instal level and, as a tablet, there’s just one USB 2.0 port which you’ll need for the installer drive. 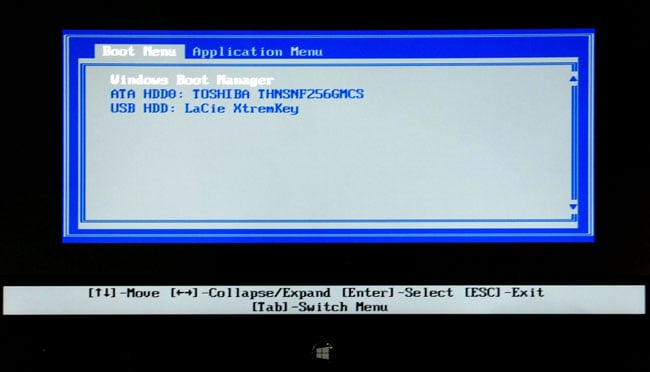 In the dock, Ubuntu 13.0.4 performed admirably, with touchscreen control and access to all the various networking options – Lenovo thoughtfully provides a USB 2.0 10/100 Ethernet adapter and a DisplayPort to VGA adapter too.

Incidentally, hooking up an external DisplayPort monitor worked on Ubuntu without a hitch; that is until you start poking around on the touchscreen in extended desktop mode. Then, oddly enough, the cursor flies off from the touch display in front of you and ends up in the extended area, working as though the touchscreen has become a massive track pad for the external monitor. 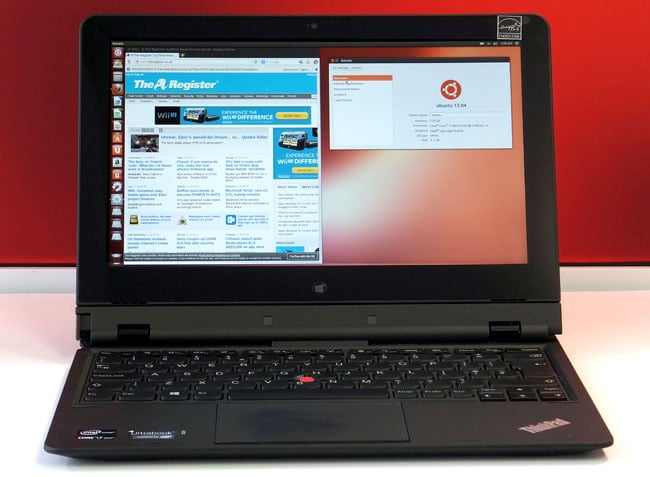 Regardless of whether you’re running Ubuntu or Windows, there’s one aspect of this convertible combo that you can’t ignore, and that’s the screen tilt angle.

Considering this machine comes from the same folk that created the Yoga, the restricted, almost upright screen/tablet positioning seems a remarkable gaffe. While writing on Word 2013 was aided by the spaciousness of the 1920 x 1080-pixels resolution, in close proximity I was inclined to push the Helix away from me slightly to get a better view, which was less than ideal.