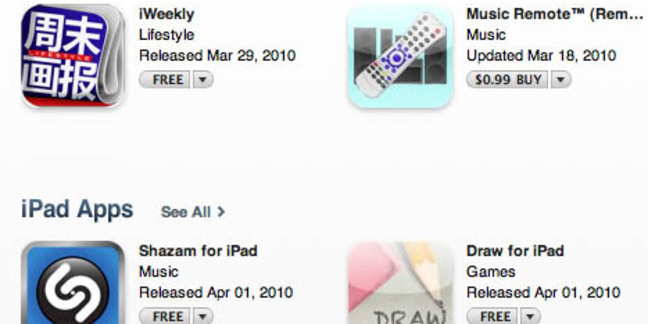 Chinese fanbois are reporting that mobile apps they didn’t buy have started appearing in their iTunes accounts, leading to speculation an app promotion company may be illegally accessing accounts.

The scale of the problem is unclear at this stage but it’s been enough to persuade staff at popular local app forum iApps to investigate, according to TechInAsia.

The team discovered that many of the apps found by users (which they hadn’t purchased) were local mobile games that now enjoy high rankings on Apple’s charts.

iApps speculated that this could be the work of an unscrupulous promotion company somehow accessing accounts and downloading those apps it had been paid to promote.

The site claimed it may have been able to do this if the handsets were jailbroken, or possibly thanks to third party synchronisation tools which gather Apple ID info.

Both are pretty popular among Chinese fanbois and certainly some of those who found the phantom apps in their iTunes revealed that they had jailbroken their handsets - a strategy not recommended by Cupertino.

A third possible explanation is that these users have shared their Apple ID with friends and family - again a relatively common practice in China.

Apple didn't have any official comment to make when contacted by El Reg.

The news comes just days after Apple was forced to close its Developer Centre website after worries it was being hacked.

However, the two incidents are unlikely to be linked, given that Turkish security researcher Ibrahim Balic has now publically claimed it was he who attacked the site in order to report security bugs in the system. ®