Boffins: Dolphins call each other NAMES. Not RUDE ones!

'Oy! Whistle-squeak-whistle! Get your ass over here'

Boffins have piled on yet more evidence that dolphins call each other by name when they whistle to each other. 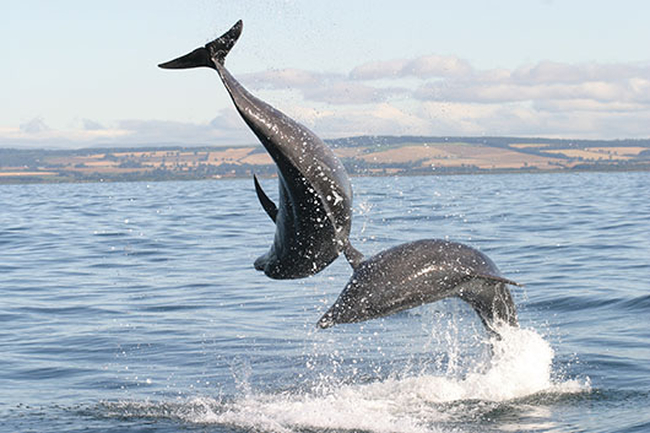 Scientists have reckoned for some time that dolphins have a unique whistle that acts as a distinctive name.

Research by marine biologists Stephanie King and Vincent Janik from the University of St Andrews already figured out that the mammals can learn the signature whistles of close friends and family and use those in conversation. But now the boffins have proved that dolphins definitely respond to their own names.

"Animals have been found to use calls to label predators or food but these calls are inherited and not influenced by learning," King said. "The use of new or learned sounds to label things is rare in the animal kingdom. However, it is ubiquitous in human society and at the heart of human language."

The marine bioboffins followed groups of wild dolphins and recorded them whistling each others' names. They then played the recordings on underwater speakers against control whistles of either an unfamiliar animal from another group or another dolphin in the same population to see if the named creature responded. Each dolphin only reacted when it heard its own whistle, calling its own name back to "answer".

"Our results present the first case of naming in mammals, providing a clear parallel between dolphin and human communication," Jankik said, adding that parrots are the only other animal to show any evidence of learning new sounds to label things.

The study, Bottlenose dolphins can use learned vocal labels to address each other, was published in the Proceedings of the National Academy of Sciences. ®