According to a new poll by YouGov, the number of Americans who believe in evolution not directed by God is rising, but those pure evolutionists still only account for one in five of those surveyed.

Specifically, YouGov asked its "representative sample of 1,000 Americans" how they felt about three versions of human evolution:

When YouGov asked the same question in 2004, only 13 per cent of Americans answered in the affirmative to the first statement. That number rose to 15 per cent in 2008, and its most recent findings, announced on Monday, saw that number rise to 21 per cent. 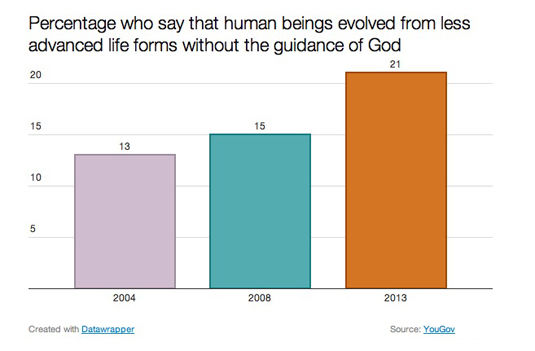 For those who take a purely scientific view of evolution, that's the good news. The bad news is that 25 per cent of all respondents said that God has guided evolution, and a full 37 percent dismiss human evolution entirely – meaning that 62 per cent believe that God is either guiding evolution or made us all as we are today at our moment of creation, which was within the past 10,000 years. 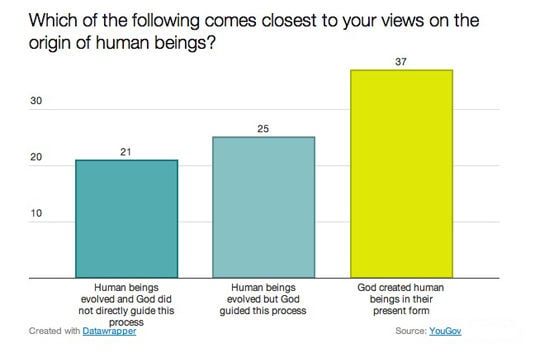 Half empty or half full – it depends upon your point of view. (The remainder of repondents answered "Not sure.")

Drilling down into the full results of the survey, which break down the respondents' answers into demographic groups, uncovers some interesting results:

Finally, YouGov also asked its respondents, "Do you favor or oppose the teaching of creationism or intelligent design in public schools?" 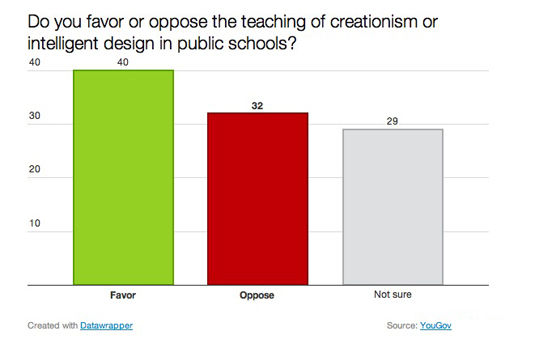 Overall, 40 per cent said that those alternatives to scientific evolution should be taught in public schools, 32 per cent opposed such teaching, and a full 29 per cent had no firm opinion on the matter. Among Mormons, 76 per cent wanted creationism or intelligent design added to the curriculum, as did 57 per cent of Republicans and 41 per cent of white folks.

Weighing in against such teaching were 51 per cent of those with a post graduate education – the only educational group that topped one-half – and those Buddhists and atheists again, at 84 per cent and 83 per cent, respectively. Only 19 per cent of Republicans oppose such teaching; 41 per cent of Democrats do.

Admittedly, a survey with a sample size of 1,000 – even a "representative" sample – is not to be regarded as gospel (or, for that matter, Gospel), but a 2005 Gallup Poll found that the same percentage of Americans whom YouGov found to believe in purely scientific evolution – 21 per cent – believed in witches and the ability to communicate telepathically with the dead. ®