Updated Since the start of this year it has become clear that the UK government has shifted from a hands-off approach to censoring content online by leaving ISPs to work out an agreed code that would prevent regulatory intervention.

TalkTalk, however, was the first to break away from the pack in 2011 by installing filters at the network level on its service, while still trumpeting that the actual blocking of content was down to individual customers.

By February this year, BSkyB confirmed that it too would make the switch to network-level filters, after it had previously posted out software packages to consumers. At that point it declined to tell The Register what technology it would use to provide content-blockers.

Virgin Media and BT publicly admitted to your correspondent for the first time in May that they too would shift to network-level filtering systems, even though many in the industry and beyond have previously resisted the tech for being "crude" - to directly quote Prime Minister David Cameron.

The three big name telcos will use DNS lookup to help customers block the material they want to censor in their homes. And all of those filters are expected be in place by the end of this year.

TalkTalk's Homesafe system - which has apparently been installed by approximately a quarter of the company's 4 million subscribers to date - was provided by Chinese vendor Huawei, which is currently being scrutinised by Parliament relating to concerns about national security.

It works by harvesting every URL visited by every TalkTalk customer. It then follows them to each web page and scans for threats, creating a master blacklist and a whitelist of dangerous and safe URLs.

Blighty's ISP industry has been extremely cagey about its leap into network-level filtering in a move to prevent regulatory intervention from the government.

Despite BSkyB, for example, revealing in May that it would "leave the box ticked" by default to switch the porn-blocking system on for new subscribers to its service, telcos have been at pains to insist that there remained an Active Choice for consumers who want to apply easily circumvented parental controls to the service.

Cameron, meanwhile, largely failed to bully telcos to change the rhetoric from Active Choice to "default on". But any debate around semantics simply misses the point.

The PM's speech on Monday was in fact an opportunity for the government to score some political points only after it was already clear that the country's largest ISPs had agreed to install the filters at a network level. He also confirmed that there would be regulatory oversight from Ofcom to monitor their implementation and workability and that smaller telcos would need to use similar systems.

In a statement to El Reg the Internet Service Providers' Association had this to say:

We’re pleased the government recognises and has welcomed the considerable work ISPs are already doing. They are investing a great deal of time and expertise into offering customers a choice over installing free and easy-to-use content filters.

However, filters, which can lead to over and under blocking and can be easy to circumvent, are only part of the solution. As recommended by the last government review, a more holistic approach involving retailers and manufacturers is required, along with an emphasis on education, awareness and parental mediation.

Meanwhile, an online petition against the filters has garnered more than 15,000 signatures. If it hits 100,000 names then the matter will need to be debated in Parliament. It states:

Aside from content of a clearly illegal nature the government should not be forcing the presence of filters at all, but instead pushing to improve the involvement of parents in a child's life, and to promote education over flimsy, disruptive, and money-wasting 'solutions'.

Tory MP Claire Perry, who is Cameron's adviser on the commercialisation and sexualisation of childhood, apparently had her website hacked in the last few days. Political blogger Paul Staines, AKA Guido Fawkes, reported that the site had been Goatse'd.

All of which prompted Perry to do a bloody good job of displaying a good heap of ignorance about how the internet actually works. At one point she accused Staines of "sponsoring" the hacking of her website. 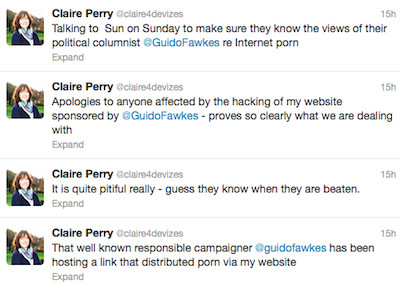 Perry fails to understand why she's covered in smut

Confused by technology again @claire4devizes ? We deliberately didn't link to your filthy website - we just took a SFW screenshot.

An anonymous tweeter using the handle @JohannFux has claimed to the Reg that he first contacted Perry about "security flaws" on her site on Monday. He said in a series of tweets to us:

"I visited her site with NoScript enabled (as normal) and examined the script before enabling. From there, it was obvious that there were gaping holes in the security of the site which I subsequently tweeted her about throughout the day but with no reply."

MP Claire Perry might not understand a lot about internet technology, but her knowledge of the Streisand Effect is lacking too it seems.

After her wild claims about the hacking of her website, Paul Staines polled his readers on whether or not to sue the anti-smut campaigner for her assertion that he had sponsored the attack.

With over 80 per cent of readers recommending a trip to court, Staines has now said he will be informing his lawyers to take action if Perry's claims are not retracted. The BBC reports that Perry is unavailable for comment but her Twitter claims are still live.

An internet advertiser as your service provider – what could go wrong?
Networks29 Sep 2022 | 16