Study: Nobel laureates consume nearly twice as much chocolate as their peers

A California researcher has discovered a strong correlation between chocolate consumption and the degree of smarts that results in being awarded a Noble Prize.

In "Chocolate habits of Nobel prizewinners", published in Thursday's edition of Nature, Beatrice Golomb of the University of California, San Diego, notes that of the 23 Nobel laureates she surveyed, 43 per cent revealed that they ate chocolate more than twice a week, significantly more than the 25 per cent reported by a control group of 237 subjects matched by age, education, and sex.

Writing in the paper upon which her Nature article was based, Golomb added caveats. "Nobelists could understate chocolate consumption to amplify the appearance that native prowess led to their Prize – producing bias to the null," she notes.

She also cites "ecological data" that linked the amount of per capita chocolate consumption in individual countries with their production of Nobel laureates.

That groundbreaking work, "Chocolate Consumption, Cognitive Function, and Nobel Laureates", was conducted by Franz Messerli, director of the hypertension program at New York City's St. Luke's and Roosevelt Hospitals, and published in the New England Journal of Medicine in October 2012.

Messerli's work studied chocolate consumption per capita in 23 countries, and discovered that there was "a close, significant linear correlation" between a country's chocolate intake and the number of its Nobel laureates per 10 million inhabitants. 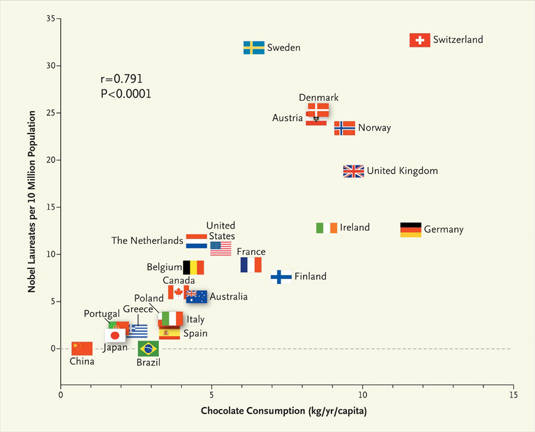 "The slope of the regression line allows us to estimate that it would take about 0.4 kg of chocolate per capita per year to increase the number of Nobel laureates in a given country by 1," Messerli notes. "For the United States, that would amount to 125 million kg per year."

Messerli freely admitted, however, that his work needed to be taken a step further. "The present data are based on country averages," he wrote, "and the specific chocolate intake of individual Nobel laureates of the past and present remains unknown."

The Nobel laureates whom Golomb surveyed had received their awards in the fields of Physics, Chemistry, Physiology/Medicine, and Economics. "Peace and Literature awardees were excluded," she writes, "because chocolate is linked to aggression (relevant to Peace Prize) and depression (germane to literary achievement)."

Some of the anonymous responses by the Laureates surveyed are instructive.

"The Nobel Foundation hands out to the Laureates, (in addition to diploma, medal and check), small gold colored tinfoil copies of the medal filled with chocolate," one Physics laureate wrote. "This must mean that they think chocolate is important."

A Chemistry laureate was more direct. "Chocolate made me who I am today," he claimed, while a Physics laureate weighed in on his chocolatey preferences: "White chocolate is an obscenity!" he sniffed.

And one Physics prize recipient, in a section Golomb entitled "Methodology Plaudits," praised her scientific rigor. "Who can say a bad word about any research that is poised so precisely in the vast space between balanced objectivity and total confusion?"

A good time, apparently, was had by all. ®