Not just for developers anymore

Geeksphone, the Spanish startup that launched the first commercially available Firefox OS developer phones in April, has announced that it will soon release a version of one of its handsets that's suitable for general consumers.

The new phone is an improved version of the Peak, one of the two Firefox OS mobes the company shipped as early preview devices for developers, and which sold out shortly after launch.

The Peak was the higher-end of those first two models, featuring a 1.2GHz dual-core Qualcomm Snapdragon S4 processor and a 4.3-inch IPS multitouch display with 960-by-540 resolution.

The new device, dubbed the Peak+, retains those basic specs but ups the amount of RAM from 512MB to 1GB. Geeksphone says battery management and graphics performance have also been improved, as has the overall construction and build quality of the device.

Otherwise, the Peak+ shares the Peak's features, including 4GB of onboard storage, an 8MP rear camera with flash, a 2MP front-facing camera, a microSD slot that accepts cards up to 32GB, 802.11b/g/n, Bluetooth, GPS, FM radio, and an 1800mAh battery. 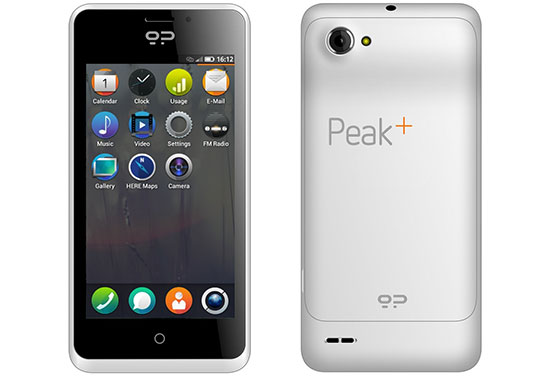 Geeksphone's Peak+ improves on the developer-only Peak, but only slightly

Those specs are hardly mind-blowing by modern smartphone standards, but they are significantly better than those of the other Firefox OS phones that are commercially available today. Both Geeksphone's own Keon and the ZTE One are low-powered devices with 320-by-480 displays, single-core 1GHz processors, and limited RAM and storage space.

The ZTE One launched in Spain on Telefónica's network earlier this month, but Geeksphone doesn't seem fazed. Even ignoring the Peak+'s superior specs, the startup says 93 per cent of its sales so far have been to customers outside the country, particularly in Germany, France, and Japan. Customers in Asia and Latin America are also reportedly showing great interest in Geeksphone's devices.

For its first consumer offering, Geeksphone is also bundling the Peak+ with 25GB of cloud storage that can be synchronized with other devices, via a partnership with data sync technology vendor Fiabee.

Beginning on Thursday, the company is accepting preorders for the Peak+ for a limited time for the discounted price of €149. The full list price for the Peak+ when it goes on sale on September 15 was not announced – but €149 also happened to be the list price of the original Peak, so draw your own conclusions.

Meanwhile, though the Keon and the original Peak are no longer available, Geeksphone says customers needn't worry. "Geeksphone will continue to support its Keon and Peak devices, releasing OTA updates with the latest versions of the OS, and has made an effort to make Peak and Peak+ 100% software-compatible," the company said in an emailed statement. ®