Guinness: Have a quick bonk over the bar and receive FREE BEER

For the next month anyone with an NFC-equipped Android or Blackberry handset is invited to enjoy a free pint of the black stuff, in exchange for a quick bonk on the bar.

It's a competition, and only available in 20 pubs around the UK, as NFC World explains, so not everyone who bonks their handset against the specially-equipped taps will get a free pint.

But it's worth entering - if only to see the faces of one's iPhone-owning contemporaries as their lack of cutting-edge wireless tech excludes them from entering. 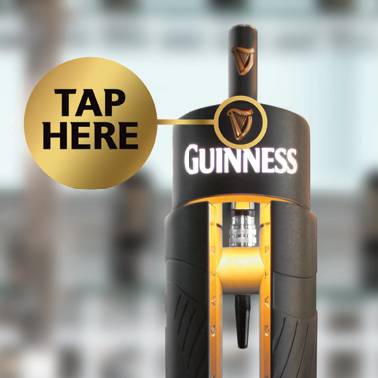 Bonking, bars and alcohol, what could possibly go wrong

Marketers are still struggling with ways to use NFC. The low price tags and easy interaction are irresistible, and with NFC handsets multiplying, we're in an experimentation phase where all sorts of things are being tried - such as the McDonalds Happy Table which recently saw light in Singapore:

If McDonalds isn't to your taste, then how about whacking your phone against a bus-stop billboard to play some games while waiting for the 307, thanks to Think&Go:

In contrast to the cryptographic exchange securing NFC payments, these marketing applications use passive tags containing only a short bit of text. That's usually a URL but application-specific code can be equally well encoded, and the price makes them cheap enough to put anywhere.

More importantly, to the industry, is that every time a user bonks a phone they get more comfortable doing so, and so become more likely to bonk again. The success of NFC is entirely dependent on user comfort, so it's worth achieving - even if it means handing out a free pint of Guinness or two. ®

India to upgrade mobile networks near Maoist insurgents to 4G

Accenture announces 'Accenture Song' – not a tune, but a rebrand