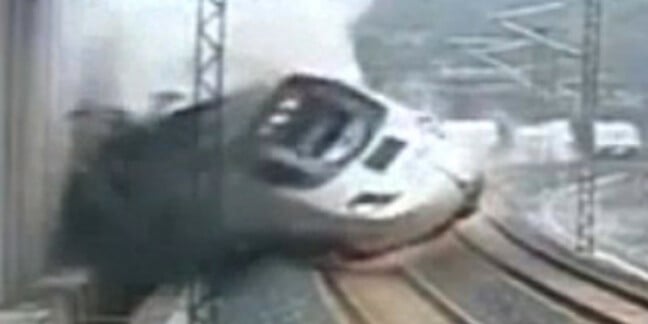 This week's Spanish train disaster, in which at least 80 people were killed after a speeding train derailed, is being exploited by internet pondlife to spread malware.

Security outfit Dynamoo spotted email spam that links to what's claimed to be to a CNN news story. Marks who click the URL end up on a hacked website riddled with malware to infect the passing web surfer.

The ruse is crude. More sophisticated scams that rely on manipulating search engine results, possibly referencing CCTV footage (see below) of the inter-city train coming off the tracks near Santiago de Compostela in Galicia, are likely to follow.

Back in the real world, Spain is mourning the deaths of 80 people in Wednesday evening's disaster, while 90 seriously injured passengers are being treated in hospitals.

Any major story, ranging from natural disaster to celebrity deaths, is liable to become the theme of malware-based scams. In the case of human tragedy or natural disaster these are sometimes followed up with fake donation sites designed to enrich scumbags rather than help genuine victims.

Earlier this week we predicted the birth of the first child to the Duke and Duchess of Cambridge was likely to become a theme of such scams. Sure enough, Prince George's arrival into the world was heralded by malware-flinging scams.

Malicious attachments in the form of Windows SCR files in scam emails about the royal birth have already been spotted doing the rounds.

The royal baby, like the Spanish train crash, and other significant news stories such as a Barack Obama speech on the US economy and more have all become the themes of fake CNN news story malware scams this week, security firm AppRiver reports. ®