The owners of a fast-food truck are bemoaning their ejection from a New York horse racing track, after the powers that be deemed its snappy name "Wandering Dago" a tad offensive to Italian Americans.

Wandering Dago proprietors Andrea Loguidice and Brandon Snooks (pictured below) had secured a spot to sell their nosh to punters at Saratoga Race Course during the thoroughbred racing season, which kicked off last Friday. 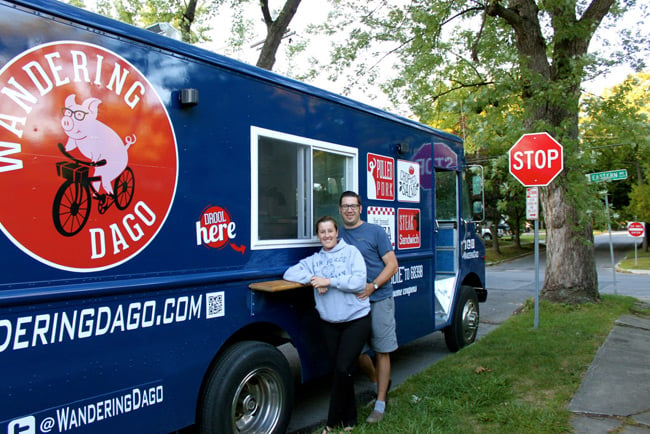 However, no sooner had they set up shop that the New York Racing Association (NYRA) gave the pair their marching orders, following trackgoer complaints.

Loguidice lamented: "What we thought was a wonderful opportunity never really got a chance to start."

NYRA spokesman Eric Wing explained: “We should have handled this before opening day last Friday, but once we started receiving complaints, we wanted to take immediate action on behalf of our customers. We have a very diverse crowd with families and people of every age, and when any of our patrons say that they’re offended by something, that concerns us tremendously.”

Last year, Wandering Dago was denied a permit to sell food at the Empire State Plaza in Albany, on similar grounds. Heather Groll, spokeswoman for the plaza's operators, said: "The name of the business was found to be an offensive ethnic slur by any standard."

Loguidice and Snooks are themselves Italian-American, and believe the word dago derives from a reference to "Italian immigrants who were day laborers, and were paid daily, or as the day goes".

Loguidice said: “Our daily pay depends on what happens that day, so we just thought it was a fun play on words. We didn’t think it was derogatory in any manner. It’s self-referential. Who would self-reference themselves in a derogatory manner?”

In fact, "dago" comes from the name Diego, and was originally used in nautical circles to refer to Spanish and Portuguese sailors*. Later, Americans adopted it as a less than polite moniker for Italian immigrants, described by Anthony J Tamburri, dean of the John D. Calandra Italian American Institute, as "the most offensive term one could use with regard to an Italian-American".

While Loguidice earlier this week resisted suggestions a name change might be in order ("It’s still America. Last time I checked, we were still on this side of the planet," she told the NY Daily News), the Wandering Dago Facebook page now has a poll asking Joe Public to vote on the matter. ®

* As Brit readers will know, the word is still used on this side of the Pond, and indeed planet, as a rude word for Spaniards.

Facebook can't root out fake news and hate talk, but – oh look – it has software to catch bugs

Amazon's auditing of Alexa Skills is so good, these boffins got all 200+ rule-breaking apps past the reviewers

Want your AI assistant to shout obscenities or hate speech at your child? There's a program for that

Hate e-scooters? Join the club of the pals of 190 riders in Austin TX who ended up in hospital