An all-flash build of Hitachi's VSP array has claimed the second-highest SPC-1 benchmark, the highest for a traditional storage array.

The SPC-1 benchmark tests the performance of storage arrays doing random read and write I/O operations typical of business-critical applications. An all-flash VSP, using Hitachi's Accelerated Flash technology, achieved 602,219.47 SPC-1 IOPS at a cost/IOPS of $2.86. The cost/IOPS is computed by dividing the tested configuration's list price by the number of IOPS. Few customers will pay list prices for such high-end arrays and so, although the SPC-1 IOPS number is an objective number providing effective performance comparisons between different arrays, the cost/IOPS figure is not.

The fastest storage system on the planet in SPC-1 terms is a Kaminario K2 array, which uses DRAM instead of flash or hard disk drives to store data. Its list price is a relatively low $490,760.00 giving us a seemingly staggering $0.40/IOPS figure. The VSP Hitachi used has a list price of $1,712,620.95.

We have produced a chart comparing different arrays' SPC-1 IOPS numbers. It's a pain to read the text so click on the chart for a larger and thus more readable version: 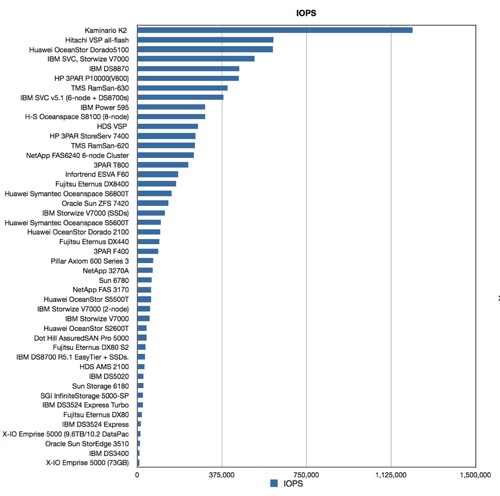 When we concede that everything has bugs, we wish it wasn't quite everything
Patches20 Oct 2022 | 2