The universe is a noisy place, if you're a radio signal: travelling through space, there's everything from the cosmic background radiation to the screaming noise of stars and galaxies; travelling through copper wires, there's the random noise that makes weak signals hard to detect.

Researchers from the University of Copenhagen, DTU Nanotech in Denmark, and NIST's Joint Quantum Institute plan to overcome the problem by not using antennas at all. Rather, they've developed and demonstrated a combination electromechanical and optical sensor that allows the signals to be captured on a laser beam.

Their work, published at Arxiv, notes that “coupling of radio frequency or microwave signals to optical fields via mechanics is particularly attractive.”

That's because much of the noise that swamps a weak signal comes not from the outside world, but from the electronics used to amplify whatever is received by the antenna – a problem encountered in radio astronomy, medical imaging, navigation and communications. 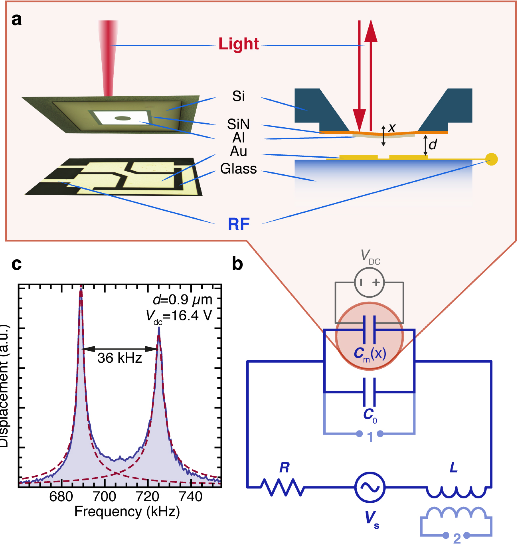 The aluminium membrane, tuned to a frequency, will vibrate when it
receives a suitable radio signal - and that phase-shifts the laser.
Source: Arxiv.

What the Danish and American researchers have demonstrated is a different approach. They coated a thin silicon nitride membrane with a layer of aluminium. The whole setup forms part of a simple LC – inductor and capacitor – resonant circuit: when struck by radio waves at its resonant frequency, the membrane vibrates.

With a laser shining on the aluminium layer, those vibrations are captured as phase shifts in the beam. A combination of a commercial Doppler vibrometer and a “homemade Michelson interferometer” to sense the laser. Once captured on optics, the radio signal can be digitised – with a far lower noise floor to worry about.

For detecting radio signals in the world of classical physics, the researchers claim an 80 dB dynamic range for broadband detection. The device the researchers demonstrated also had a sensitivity limit of 5 pV per root-Hertz or -210 dBm / Hz at its frequency band of 1 MHz.

Also impressive is that the device doesn't need the kind of cryogenic cooling that super-sensitive radio transducers use, but can operate at room temperature. ®