Climate change even worse than you thought: It causes war and murder

It has happened throughout history – why not now?

Having conducted what they characterize as "the first comprehensive synthesis" of quantitative analyses linking violence to climatic changes, a trio of researchers has come to the conclusion that as the world continues to heat up, humankind will be more prone to violence.

"If future populations respond similarly to past populations, then anthropogenic climate change has the potential to substantially increase conflict around the world, relative to a world without climate change," conclude Solomon Hsiang, Marshall Burke, and Edward Miguel, authors of a paper published on Thursday in the journal Science entitled "Quantifying the Influence of Climate on Human Conflict".

The three researchers – from Princeton, the University of California at Berkeley, and the National Bureau of Economic Research in Cambridge, Massachusetts – took a "rigorous approach" to selecting quantative studies to underpin their research.

Keeping in mind that "not all correlations imply causation," the trio obtained data from 60 primary studies that analyzed 45 different conflicts, published in 26 different journals that "represent the work of over 190 researchers from around the world." The periods under study ranged from 10,000 BCE to today, and covered all "major" global geographies.

Needless to say, one cannot run a true control-based experiment on climate change and its effect on conflict. To do that, one would have to obtain data on the amount of conflict in an area with rising temperatures, and compare it to the same area at the same time, but without rising temperatures. 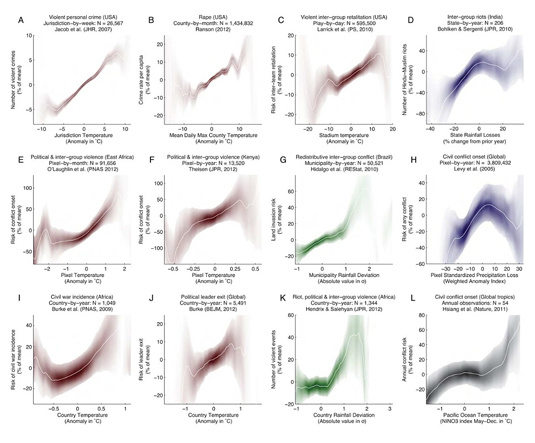 Various type of crime and violence in relation to climatic change (source: Science – click to enlarge)

Because of this impossibility, the three authors write, the studies they surveyed employed "natural experiments" in which a population's degree of conflict was quantitatively analyzed just before and just after a change in climatic conditions.

"Inferences are thus based only on how a fixed population responds to different climatic conditions which vary over time," they write, "and time-series or longitudinal analysis is used to construct a credible estimate for the causal effect of climate on conflict."

The authors, by the way, separate conflict into two major categories: "interpersonal violence" and "intergroup conflict"; the core climatic factors they surveyed were temperature and rainfall.

"The magnitude of climate's influence is substantial," they write. "For each 1 standard deviation (1σ) change in climate toward warmer temperatures or more extreme rainfall, median estimates indicate that the frequency of interpersonal violence rises 4 per cent and the frequency of intergroup conflict rises 14 per cent."

The trio readily admit that their conclusions do not suggest that climate is the only – "or even primary" – driver of human conflict. What they do conclude, however, is that large climatic changes have been observed to "have substantial effects on the incidence of conflict" that "appears to extend across the world, throughout history, and at all scales of social organization."

Why this is true, they don't know – but they're confident in their assessment that there is a link between climate change and violence, and that such a link needs further study.

"To place the state of this research in perspective," they write, "it is worth recalling that statistical analyses identified the smoking of tobacco as a proximate cause of lung cancer by the 1930's, although the research community was unable to provide a detailed account of the mechanisms explaining the linkage until many decades later."

Although they suggest that more time and effort needs to be spent on uncovering the cause-and-effect relationships between climate change and conflict – if any – they warn that "disregarding the potential effect of anthropogenic climate change on human conflict in the interim is, in our view, a dangerously misguided interpretation of the available evidence." ®