Astronomers have detected a low-mass giant planet that challenges existing theories about how bigger worlds are formed. 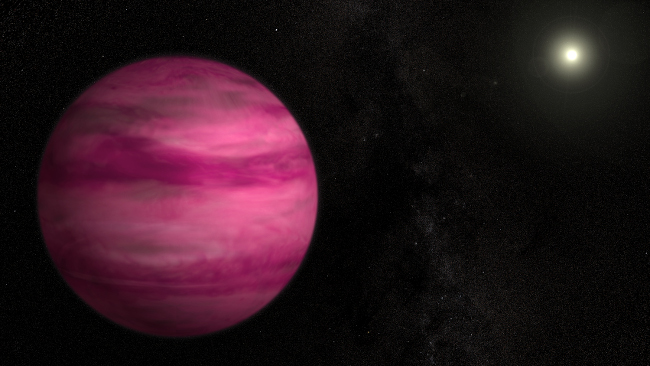 The Jupiter-sized world, dubbed GJ 504b, was found much further out in its star's orbit than a planet its size should have been, if you go by existing planet-formation theory.

GJ 504b weighs in at around four times Jupiter's mass, and is the lowest mass exoplanet* to be imaged orbiting a Sun-like star using direct imaging techniques.

Given its similarity to Jupiter's size, NASA boffins were surprised to find that it was much much further away than Jupiter is in the solar system's setup: nearly nine times as far, to be exact.

According to existing theory, planets of this size are formed in the gas-rich debris field around a young star. Collisions between asteroids and comets in the disk around the star provide a core seed, which pulls in gas to form a planet when the core reaches sufficient mass to have gravity.

But this model - called "core-accretion" theory - only works well for worlds out as far as Neptune in our solar system, around 30 times further out than the Earth, and not so well once the world is even more distant from its star.

"This is among the hardest planets to explain in a traditional planet-formation framework," said team member Markus Janson, a Hubble postdoctoral fellow at Princeton University.

"Its discovery implies that we need to seriously consider alternative formation theories, or perhaps to reassess some of the basic assumptions in the core-accretion theory."

The team spotted GJ 504busing direct imaging techniques with infrared data from the Subaru Telescope in Hawaii. Direct imaging gives researchers lots of data about exoplanets, but is arguably one of the hardest techniques to manage.

"Imaging provides information about the planet’s luminosity, temperature, atmosphere and orbit, but because planets are so faint and so close to their host stars, it's like trying to take a picture of a firefly near a searchlight," explained Masayuki Kuzuhara at the Tokyo Institute of Technology, who led the discovery team.

GJ 504b orbits the G0-type star GJ 504, which is slightly hotter than our Sun and faintly visible to the naked eye in the constellation Virgo, 57 light years away.

The team estimates that the system is around 160 million years old, with the star at just one-thirtieth its age, compared to the Sun, which is around halfway through its energy-producing life.

"If we could travel to this giant planet, we would see a world still glowing from the heat of its formation with a colour reminiscent of a dark cherry blossom, a dull magenta," said Michael McElwain, a member of the discovery team at NASA's Goddard Space Flight Centre.

"Our near-infrared camera reveals that its colour is much more blue than other imaged planets, which may indicate that its atmosphere has fewer clouds." ®

* Planet which orbits a star other than our Sun