Next-gen drives strip off, paraded in the sun, but what lurks in the depths?

A performance-versus-capacity war is brewing in the hard drive industry with Seagate leading on disk-flash hybrids and WD-HGST on helium-filled devices.

Seagate presented shingling as a way of boosting the Perpendicular Magnetic Recording (PMR) technology today's drives use. The storage world is approaching the superparamagnetic limit of about 1Tbit/in2 areal density, and beyond that limit the magnetic grains making up the bits are so small that they flip their magnetic polarity in response to temperature changes and neighbouring grain influence, rendering data storage impractical.

Today's Seagate drives store bits and bytes in the 500 to 625Gbit/in2 area. Theoretically, there's scope for Seagate to build a sixth-generation PMR range of devices with 700 to 800Gbit/in2 areal densities; but will it?

Previously Seagate has said we should expect its first SMR drives (with 4.8 to 5TB capacities) this year and HAMR drives in 2014 (capable of storing up to 6.4TB). Clearly, SMR and HAMR products will overlap, with, we suppose, SMR drives used for low-random-write-rate applications and HAMR used for high-write-rate applications, and flash hybrid drives used for high-read-rate software when affordable capacity is needed compared to SSDs.

(We note in passing that Western Digital's HGST wing is not interested in producing hybrid drives.)

It's possible we'll eventually see flash-hybrid SMR drives and flash-hybrid HAMRs on the market from Seagate, although the tech giant didn't mention these types as future products; logic suggests they could exist.

The presentation covered several future drives as well as SMR and HAMR technologies, with hybridisation playing a major role in Seagate's coming disk drive line up; helium-filled drives were absent. This is what was covered:

This drive was revealed by El Reg in March. Now we have better information saying that this 3.5-incher will come in 2, 3 and 4TB versions, with between 16GB and 32GB of NAND cache for system boot files and possibly other very high access-rate data blocks. The spin speed could be 5,400rpm.

We heard that this drive should be out next quarter.

Seagate bills this as the world's fastest hard drive and it is a 2.5-inch form-factor hybrid drive spinning at 10,000rpm with up to 600GB capacity. Read some background here. 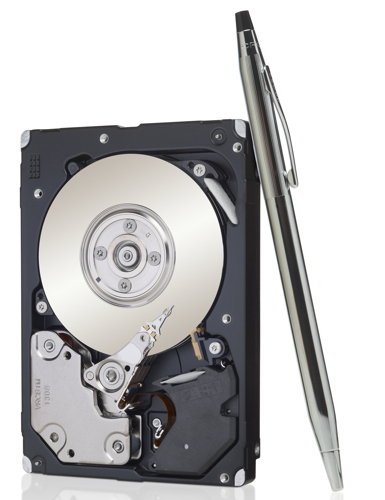 We understand a 15,000rpm version may come later. Seagate claims the 10K version has up to three times the random read performance of 15,000rpm disk drives, with read performance boosted by holding hot data in a 16GB MLC NAND cache. 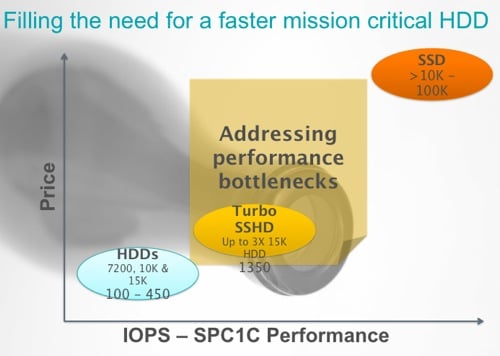 We also think it's logical to assume that Seagate's NAS drive will be hybridised eventually as well. One comment in Seagate's briefing was that, in time, the hybrid drive will be the disk drive; all Seagate disk drives being SSHDs. In other words, Seagate will hybridise all its disk products at some stage.

Toshiba has its own hybrid drive technology and can be expected to hybridise its drives, where it sees a market need, in response to Seagate and WD.

We were told that self-pinning of data is being evaluated by Seagate. With this a user can select which bytes to hold in flash, rather than relying on an automatic controller or software. It will probably have more NAND than one which auto-selects its own data to go into the flash cache. The idea was compared to Intel's Smart Cache.

With shingling, successive write tracks overlap the previous tracks, effectively narrowing them, but the read head, which is narrower than the write head, can still read each of these individual tracks.

A problem comes when data has to be re-written: the write head is relatively wide and its new track area will overlay the next track area, thus deleting it. So the disk system has to read the about-to-be-overlaid track area, save that data, write the new data and then, crucially, write the preserved data back in its place.

However this second act of writing overlays the next track. So the data in the about-to-be-overlaid area, has to read, preserved, and so on to the end of the disk, were it not for the insertion of spaces between groups or bands of tracks so as to confine successive re-writing within a band of tracks. Seagate will not say how many tracks there are in a band. It does point out that the spaces between bands are wasted, in the sense they could be used to record data.

In today's PMR storage tech there are spaces between each track, and shingling tries to use as much of this space as practicable for data recording, ideal for sequential writing albeit at the expense of random write speed.

Shingling, as a technique, can be applied to PMR and to HAMR drives. There was no information given about when SMR drives might be introduced. El Reg was told that there are prototype SMR drives and they are being evaluated as potential products. It is our belief that the successor to Seagate's Terascale drive will use SMR technology.

A we have seen, PMR gives out around 1Tbit/in2 whereas HAMR could go up to 5Tbit/in2.

HAMR gets around today's PMR drives' high areal density problem of temperature change-induced bit-flipping by using a different recording medium which has a high coercivity value - meaning random temperature changes don't flip the bits. This makes writing data more difficult and the bit area has to be momentarily heated by a laser pulse before the data is written, after which the bit area cools and its binary state remains stable; hence the name Heat-Assisted Magnetic Recording (HAMR).

HAMR and Shingles versus helium

HGST drives will achieve a capacity boost by using helium, if the technology works. The company can put more platters inside a 3.5-inch, or 2.5-inch, enclosure filled with helium, rather than normal air, thus packing more information inside. This is thanks to helium being less dense than air: there's less drag force on the spinning disks, and the delicate internal mechanisms that move the read-write heads over the magnetic surfaces suffer reduced buffeting effects, allowing more platters and data tracks to be crammed in.

Let's say this works. Then HGST could take existing recording technology, stick more platters and tracks in a helium-filled case, and get a 1.5X increase in drive capacity. So we can envisage a 4TB gen-5 PMR drive from Seagate facing a 6TB gen-5 PMR helium drive from HGST.

If Seagate then produces an SMR drive to increase capacity, HGST can do a helium-filled SMR drive to maintain its capacity advantage. One view of the situation is that Seagate is racing ahead with HAMR to get its areal density boosted so that its drive capacities can increase enough to compete effectively with HGST's helium-filled drives. Seagate will also aggressively hybridise its drives to give them a read performance edge over its competitors.

Unless HGST can introduce HAMR drives in the same timeframe as Seagate it looks like its helium-based capacity increase advantage could be partly or wholly nullified by Seagate's early introduction of HAMR.

Once HGST has HAMR technology nailed, helium-filled HAMRs would reinstate HGST's capacity advantage. We believe that it is highly likely Seagate has researchers looking at helium-filled drives to see if the technology, which it previously rejected, could become part of its drive arsenal and give it a way of clawing back HGST's looming competitive advantage. ®