The more you scare us, the more we ignore you

Analysis Public perception is tilting in favour of the UK exploiting its rich shale gas reserves, according to a survey conducted by the University of Nottingham.

The perception of shale gas as a "clean energy" has also shifted. The survey authors wrote:

"The prospect of shale gas extraction in the UK is also increasingly approved by the British public. This does not, however, mean that shale gas has particularly high approval ratings when compared with other potential sources of energy," note the authors.

What's remarkable is that the survey's questions give equal weight to environmental concerns which are either exaggerated, or completely unfounded.

Hydraulic fracturing is decades old, and the impacts are well known: it does not cause detectable earthquakes, pollute the water table, or turn taps into flamethrowers. Drilling rigs co-exist beside golf courses and nature reserves. So it is not hard to imagine what the responses would be to a survey more firmly anchored in the empirical evidence. 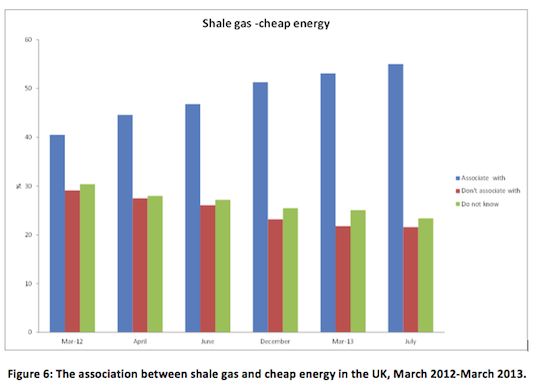 Cheap energy from shale gas ... of course Brits want it! Click to enlarge

Last week celebrities including Bianca Jagger, and dozens of other outsiders descended on the village of Balcombe in Sussex, where UK energy company Cuadrilla has been granted a licence to drill for conventional oil, some 3,000 feet below the surface. The company said it was not using hydraulic fracturing and was drilling "a conventional well", and is not actually looking for gas. It's similar to a couple of dozen such permits granted each year. 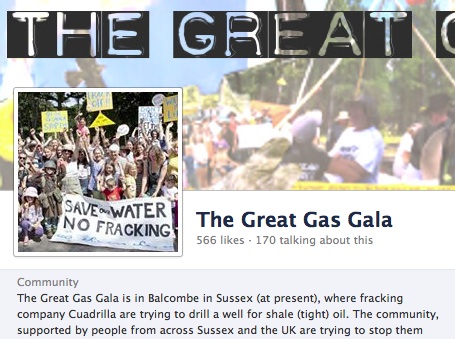 Brighton Friends of the Earth: stop fracking for gas at Balcombe! Except there isn't any fracking, and it's for oil, not gas

Yet one would have to comb reports very closely indeed - across media ranging from the Daily Mail to the BBC - to discover any of this. Far from gently mocking the misinformed protesters, they are indulged. When it comes to environmental stories, the media has only one mode of operation, the Private Frazer mode.

But could it be that the presence of the celebs and hysterical reporting is actually working in shale's favour? It's not impossible, and there's a precedent. The Daiichi Fukushima nuclear accident of 2011 received similarly hysterical media coverage, after which public support for nuclear energy rose to an all-time high.

Figuring that a 40-year-old boiler could go into meltdown after a tsunami, and yet fail to cause a single fatality, the public quietly reasoned that perhaps the fears of nuclear energy are overstated.

This is possibly an environmental journalist's worst nightmare. For 40 years they've lobbed scare stories at the public and watched them explode. Now the public appears increasingly inclined to throw them right back.

Thanks to the internet, far more information is available to us to make a rational, informed decision. Whatever frightened the public before just doesn't seem to work any more. ®