A small step closer to your sci-fi future...

A decade of testing is close to paying off for New Zealand company Martin Aircraft Company, which has announced that it has received certification to conduct manned test flights for its Martin Jetpack.

The New Zealand Civil Aviation Authority has given the outfit the go-ahead to conduct manned flights of its twelfth prototype, building on the Experimental Flight Permit that was issued back in May.

The manned test flights will first be conducted indoors, the company says.

Its specification for the jetpack stipulates flight time up to 30 minutes, and while its ceiling hasn't been confirmed, the company told NPR its maximum altitude could be as much as around 2,400 metres (8,000 feet).

The jetpack consists of the engines and ducts, a platform for the pilot to stand on, joysticks and a control console.

In 2011, the company posted this video to YouTube demonstrating the unit to 1,500 metres (5,000 feet) with a dummy aboard. That demonstration was important, since it shows that the jetpack's engines are powerful enough to lift it beyond “ground effect” (the extra lift that happens near a fixed surface).

Martin Aircraft Company hopes to launch its first commercial units in 2014, aiming the technology at first responders who might otherwise have trouble working around traffic jams caused by accidents, and might benefit from having an aerial view of the world. 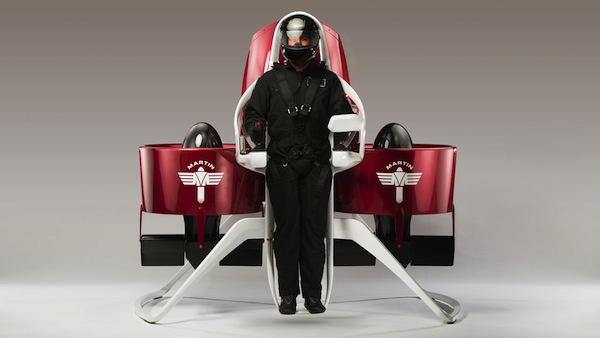 The latest version of the Martin Aircraft Company jetpack

It expects a commercial-level unit to ship for around $NZ175,000, and a military unit – which would be kitted out with suitable communications equipment – to fly out the door at just $NZ250,000.

And with conventional petrol (gasoline for US readers) powering the engine, CEO Peter Coker says users could drop into an ordinary service station for a top-up. ®